Meet Coco and Breezy Dotson, the twin sisters who are eyewear designers, DJs and philanthropists

Corinna “Coco” Dotson sits on the left. Her décolletage is adorned with tattoos, she is wearing a strapless top and there is a collection of rings dangling from her nose. On the right is her identical twin sister, Brianna “Breezy” Dotson: the same assortment of body art, nose rings and dreaded hair, which she twists throughout our conversation. Typically, I’d find this experience of double vision disconcerting, but in this instance it’s a delight.

The sisters are the co-founders of Coco and Breezy Eyewear, a sunglasses and optical glasses company established in 2009, when the twins were just 19 years old. Designs (from $225 to $325) are categorised simply as Round, Rectangle, Cat-Eye and Aviator, but the DNA is bold, colourful and ambitious – the iconic “third eye” sunglasses designed for Prince being one example of their ingenuity.

The sisters moved to New York from Minnesota, and began their venture from an apartment in Brooklyn with just $1,000 and the eyewear designs they had created to shield themselves from bullies in their hometown. “The people bullying [us] were hurt. They tried to ruin our lives, but we got something dope from it,” Coco says. The resulting mix of resilience and compassion has grown into a range of coveted statement eyewear with distribution in more than 400 stores and celebrity patronage from Beyoncé, Lady Gaga and Nicki Minaj.

A strong work ethic and zen temperament were ingrained in the twins early on. “By the time we were 19 we already had three jobs each,” Breezy says. They describe the incredible support of their parents as another key aspect of their entrepreneurial journey. “We started off with self-expression,” Breezy explains, “and I think that set us up for success in regards to being creative.” It’s an upbringing that also fostered an appetite to give back, and they now mentor a number of black-owned eyewear companies. “We’re not stingy at all with our knowledge!” exclaims Breezy, while Coco laughs.

Their own introduction to the eyewear industry was less cushioned, but they see the positive in finding their own way: “Life is about going through an experience and figuring out how you can learn from it.”

As well as Coco and Breezy Eyewear, the twins produce music and DJ. “We make glasses to heal your eyes, we make music to heal your soul” is the mantra declared by Coco. Recent innovations in “healing” include a collaboration with Zenni Optical to create affordable eyewear for children aged eight to 12, a percentage of profits being donated to the Child Mind Institute, and the purchase of a contemporary mountain retreat in the Catskills called The Lorca, consisting of five vacation properties renovated with friends. They also released a new song in November, “U” featuring Dawn Richard.

It sounds exhausting, but neither Coco nor Breezy seems overwhelmed. “We celebrate our losses and our wins,” Breezy says, looking to Coco, who affirms her sister’s point: “We just try to keep everything super-even-keel.”

READ MOREThe Kudos Project
Is it a jumper, is it an artwork, is it social activism? 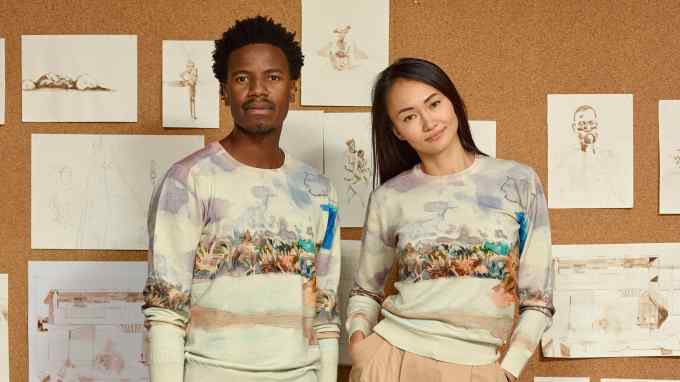