If you think the same, join us
FT Series Womenswear Spring/Summer 2019 shows
See all 39 stories
LVMH

After a pas de Dior and Gucci theatrics, do the clothes really matter?

At the first shows of Paris SS19, the emphasis was on the spectacular

We’ll send you a myFT Daily Digest email rounding up the latest LVMH news every morning.

Maria Grazia Chiuri’s SS19 performance — her fifth show at Dior was accompanied by a dance devised by choreographer Sharon Eyal — opened just as news of the Versace sale broke. The purchase of the Italian label by the Michael Kors group for €1.83bn raised questions. Mostly: “huh?” What will become of the family-owned brand fabled for its sultry, sexy glamour when it enters the fold of a big corporate group? And what does it mean for fashion when the show schedule and, by default, the business, is choreographed by a tiny clutch of corporate groups?

Dior is the definition of a corporate beast. Last year LVMH integrated the entire brand within the group in a deal valued at about €12.1bn. In her role as womenswear designer, also in charge of shoes and accessories, Chiuri must project brand clout, preserve the house’s artistic integrity, and make a profit. It’s a dance whose steps are near-impossible to master.

Chiuri’s SS19 show was staged in vast, petal-strewn shed at the Paris Longchamp Racecourse near the Bois de Boulogne. “I try to speak more about the experience and less about the clothes,” said Chiuri of her decision to stage a spectacle. “Because that is what fashion is today.” She wanted us to get in the moment. To put down our phones. To feel something.

The collection was, for the most part, a classic reinterpretation of dancewear for modern life — flesh-coloured dresses, pleated jersey, petals, feathers and artisanal tulles, beigey neutrals and pretty skirts. The same sort of details inspired Degas more than 100 years ago, and nothing much has changed in the interim. Who, after all, doesn’t want to look like Isadora Duncan?

After last season’s theme of 1960s radicalism, Chiuri’s mood was more feminism-lite. The emphasis was on freedom, movement, comfort and fluidity. She had stripped out corsetry to make the bodices more breathable, the skirts were pleated in tissue-like silk tulles. The volumes were deflated, and the lines were straight. Having never really worked with jersey, Chiuri had wrestled with the fabric for the first time and her opening four looks had a timeless grace. Even the tie-dye separates (a trend that, mystifyingly, has started to gain traction for SS19) were tasteful. It was commercial, wearable, market-pleasing product, in the same palette of neutral colours that have possessed the whole season.

It was certainly an experience. It’s hard to sit through a 20 minutes of some dude twitching before you in a printed bodystocking and not be in any way moved. But for all the effort of its choreography, I failed to feel the magic. And I wished more attention had been lavished on the clothes.

Quite how Alessandro Michele began to devise his Gucci SS19 theatrics is impossible to tell. Was it when he watched the work of 1960s Italian experimental theatre stars Leo de Berardinis and Perla Peragallo, whose short film opened the show? Was it when he settled on the venue, the Théâtre le Palace, the fabled Paris nightspot of the 1970s and 1980s counterculture? Was it while designing Mickey Mouse accessories? Or on hearing “Baby Alone in Babylon”, as was sung from the audience, mid-way through the show, by Jane Birkin?

Michele’s extraordinary magpie mind incorporates a million different references, ideas and influences, which he intercuts and layers. Police sirens and opera overlapped on the soundtrack. The clothes were Technicolor-bright.

In fact, this SS19 collection had actually begun with an “obsession”, he told reporters backstage. “I had a haunting idea. And it really began with a colour. Black.” It’s a colour he finds hard to work with. Michele describes black as “having its own presence”. They share a “strange relationship”. But out of this void, he had built his show.

Chiuri talked of the meaning of experience. Michele’s shows are more the product of a mood. Sometimes, the whole thing feels like a tone poem, a sensory bath. He’s an expert in creating a feeling around clothes. And some would argue that’s just as well, since his aesthetic — a casual jumble of bright lamé metallics, nightclub Lycras, 1970s-inflected suiting, normcore basics, slogan T-shirts, acid-coloured cocktail gowns, Dolly Parton-tribute jackets, woolly hats, webby legging and all things in between — is virtually unchanging. It’s looked fairly similar since his first show, for AW15.

But I don’t think it really matters. The point is, no one else can do Michele’s Gucci like Michele. People go crazy for the clothes and the shoes and the myriad accessories. They go mad for Michele himself. The Kering-owned brand’s success still overwhelms the market: Gucci recorded €6bn in sales last year, and plans to hit €10bn in annual sales soon. Aided by his chief executive Marco Bizzarri, Michele has created a powerful brand identity that can be rolled out commercially worldwide. Because it has an authentic point of view.

Many design houses have tried to introduce elements of Michele’s style to their catwalks, but it has always looked a bit naff in other people’s hands. Perhaps the great swathes of beige we have witnessed on so many other catwalks elsewhere this month have been an acknowledgement of defeat. When it comes to the crazy Gucci cornucopia, no one can really compete.

Get alerts on LVMH when a new story is published 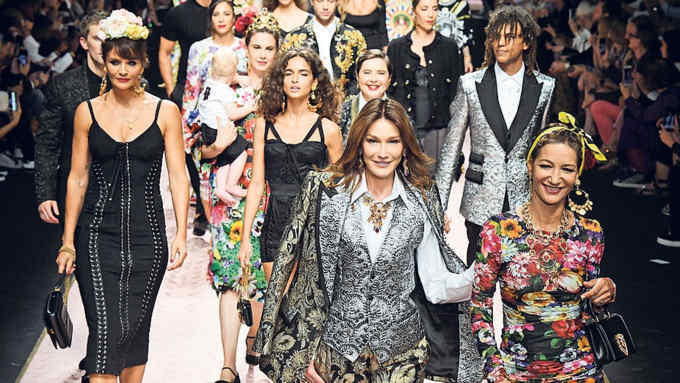