After a long spell skulking around in Gucci’s shadow, the buzz around Prada is palpable again. It’s especially humming in Milan where, this season, the brand sits near unrivalled on the schedule (Gucci are showing next Monday in Paris).

The big Prada turnround is gathering momentum. In its half year report in June, the group reported a 9 per cent rise in revenues, while profits rose around 11 per cent. The company, which includes Church’s footwear and Miu Miu in its portfolio, has been undergoing a major overhaul in the two years since seeing its market value halve, and the fruits of its efforts are starting to show.

Patrizio Bertelli, the Prada chief executive, has souped up the brand’s ecommerce offering and developed new product. The relaunch of Linea Rossa a fortnight ago, the Prada sports line first released in 1997, has been an especially bright idea. Bits of the collection, with its signature red line, have been appearing on the catwalk for a while in both the men’s and womenswear collections. But the decision to put more focus on this long-neglected category, at a time when fashion is all about utilitarian smarts, suggests the company is attuned to the rhythms of the market once again.

In the meantime, the design team has been reissuing new versions of Prada’s archive hits. Throughout the month I’ve been spotting people in the house’s banana print, which first appeared in 2011. Likewise the flame print shirts and peppy mohair flame sweaters of 2012. And there’s still a market for the lipstick-print pleat skirt of 2000 (you know, the one that Charlotte wore in Sex and the City). All are in store again, and have proved infinitely enduring. Why wouldn’t they? They’re great.

Of course, no designer only wants to play their greatest hits. But for Prada, the reissues have been essential in reclaiming the brand’s relevance, and putting it back on the map.

Likewise, for SS19, Miuccia Prada was playing with many of the styles and fabrications that have long intrigued her. Staged in the Prada Foundation’s new live performance space this Thursday, she sent out many of her trademark looks: heavy T-shirt jersey dresses, Bauhaus shorts, duchesse satin jackets, socks, princess coats and knee-grazing skirts. She then spliced them with perky accessories to renew it again.

The models wore huge inflated headbands that looked like haloes and carried glossy structured handbags. Conservative looks were punched up with tougher details — a series of studs on a shirt, a boxy black leather jacket, keyhole detail sweaters and stretchy bodysuits in jersey that scooped down to the navel and strapped around the ribs.

Miuccia Prada, who loves her contradictions, said the collection was about the tensions between progressive radicalism and “extreme conservatism”. Her clothes were a balance of the sweet and the subversive. She always wants a wardrobe to upset the status quo and according to her vision, we will be fighting the new fascism in a sock shoe and a leotard.

Aesthetically, it looked rooted in the Fifties or early Sixties, and had that prim girlishness that Miuccia Prada has made her own. And while I’m not the biggest fan of satin (I prefer Prada when it’s a bit more grey and brutal), as a feminine counterpoint to the new Linea Rossa, this collection made all kinds of sense. It will certainly please the brand’s longstanding fans, who love her ladylike looks with a side of sauce.

There was very little to please at Emporio Armani, which was staged in an aeroplane hangar at the city’s Linate airport. Shuffling through the terminal’s tired old departure gates while having our bags searched was a grim reminder of how unglamorous travel can be.

The setting was hubristic. But even the mirrored catwalk, branded boarding cards, 2000-seater stadium, and a guest performance by Robbie Williams couldn’t distract from an oddly downbeat collection.

In a slow parade of close to 200 looks, we saw greige parachute silk separates, soft tailoring, kaleido-sequins, more greys, toxic neons and cobalt blues. In their casual trousers and relaxed fit coats, slung with nylon hybrid bags that were part bum-bag, part tote, I think the models were supposed to conjure the attitude of urbane professionals on their way across the world. But instead, their plodding pace, sad expressions and scrawny bodies recalled a group of people who’d just missed the last train home.

Prada was a lesson in how to harness your brand DNA and make it more modern. Lots of it was familiar, but it had a new twist. Emporio Armani looked as rigidly stuck in its creator’s worldview as ever, and beginning to look quite desperately dated. As the show reached its final conclusion, I couldn’t wait to take off. 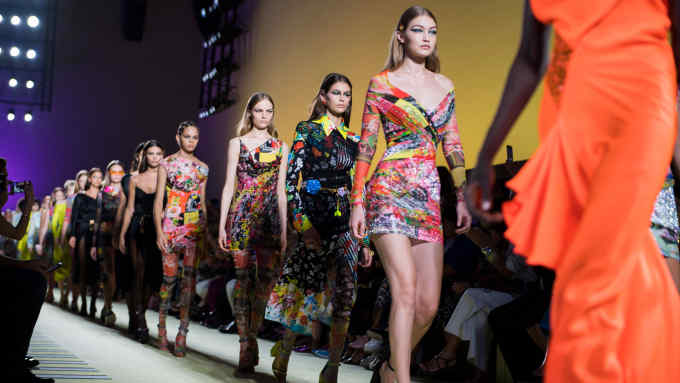