Monica! Eva! Isabella! Ashley! Influencer! The Dolce & Gabbana show was a family affair, celebrating the brand’s DNA, which is at this point unmistakable: Sicilian romance, widow’s weeds, black basque seduction, embroidered florals, silk lingerie and souvenir prints are wrapped into the duo’s genetic makeup. This season, to drive the point further, they had invited the house’s “family” to help them on the catwalk.

Monica Bellucci sashayed in a polka-dotted, off-shoulder dress, Eva Herzigova wore a black Byzantine ball gown. Isabella Rossellini, flanked by her children and grandson, wore a long robe coat, and Carla Bruni wore gold brocade. The models, a collection of clients, influencers, models and friends, are all part of the Dolce massive. And there were dozens of them. In all shapes and sizes and ages. Rare is the brand with such a powerful fingerprint — it leaves a deep impression.

Designer Francesco Risso had a fitful start at Marni. Charged with plugging the gap left by the departure of the brand’s founder, Consuelo Castiglioni, in 2016, he has had to conjure something of the brand’s signature sculptural silhouettes, bold colour use and avant-gardism while also carving his own name. It hasn’t always been convincing.

For SS19, he seemed to be leaning on his own career history in the Prada womenswear studio to find his prints and form. The deconstructed corset tops, full skirts and vivid photo-prints (showing Grecian statues, naked bottoms, and abstracted paintbrush marks) retained hints of the styles at his former employer. In a good way. The looks were more feminine, the palette was arresting, the silhouette — which under Risso has been a bit sack-like and overwhelming — had been tightened up. It all looked a bit more sophisticated.

“Deboned Prada”, whispered the critic sitting next to me. She wasn’t wrong. But I felt that Risso is starting to get it right.

Paul Surridge is a year into his efforts to steer Cavalli into modernity while retaining the house’s reputation for animalia, embellishment, embroidery and exuberant glamour. No easy task.

For Surridge, the key to unlocking this conundrum for SS19 was a bike short. The stretchy sportswear was a vital underpinning in the collection, providing a degree of modesty to looks that included micro-mini leather woven corset dresses and gauzy “shirting” knits.

Shorts have been a huge trend all season. From soccer mom style to long Bermuda versions, and from the tailored knee-lengths of the Bauhaus school to boxer. Certainly, they look more modern and practical than skirts, and they seem less of an anomaly today when we’re all “headed to the gym”.

At Cavalli, the bike shorts were most interesting when worn under sleeveless tailored blazers. It’s not the first time I’ve seen it (Versace last season was all over it already), but I’m coming round to the look. As an alternative boardroom or evening proposition, it’s brave, but also surprisingly chic.

For SS19, Paul Andrew was still focused on the themes of his Ferragamo debut last season; practical daywear, clean lines, outdoorsy clothes and lots and lots of leather. His men’s and women’s collection have a great synergy; he works closely with Guillaume Meilland and the two are closely aligned, with each borrowing accents and details from the other.

Of the things I particularly loved: the overalls, especially delicious in a black nappa leather; the insouciant cut of the trousers (for both men and women) in feather-light polyester poplin, pinstripe or satin; and the foulard print — redeveloped from a piece in the archive — that looked a bit William Morris-y and appeared on trench coats, skirts and suiting. Hopefully they will all find themselves in store.

Shalom Harlow closed the Versace SS19 show. The 44-year-old model hasn’t been a regular fixture on the catwalk since the late 2000s; one of the world’s highest-earning models, she simply stepped away. The Versace brand, however, has a persuasive way of getting supermodels to come out of retirement. Freja Beha Erichsen was walking as well. Sightings of the Danish model are scarce these days, but the Versace show took her tally this season to two. With any luck we’ll see more of her in Paris.

Models may only be the vehicle on which to admire clothes — in this instance stretchy florals, floaty handkerchief layers, button-through pencil skirts and bright, peppy checks — but a great model can transform a show. They bring an attitude and energy to proceedings. No one understands this better than Donatella Versace, who talks of her models as fondly as family. There have been lots of new faces this season, and a greater diversity of bodies on show. Harlow, strutting the runway, head thrown back to reveal those killer cheekbones, was a welcome blast from the past.

Surfwear has been a bubbling trend on the SS19 circuit. Raf Simons showed scuba-lined dresses at his Jaws-themed Calvin Klein show. At Etro, Veronica Etro’s dip in the water was a far less treacherous outing.

Starring international surf stars Victoria Vergara and Maribel Koucke, the collection took in all sorts of watery cultures, starting in California, cresting towards Hawaii and crashing in Japan.

Blanket jackets, bohemian denims, a melange of tropical prints, crochet and shell accessories all contributed to the patchwork of beach-flavoured clothes, and the colours were poppy and bright.

The Italian brand, famed for its paisley print, is marking its 50th anniversary this year, and an exhibition dedicated to its archive will open this weekend. But creative director Veronica Etro, one of the four children of Etro founder’s Gimmo, was keen to keep the show and the celebrations apart. And as a sweet celebration of summer escape, it was perfectly splashing.

Things get ‘sketchy’ at Moschino

Moschino was a “sketch”. Designer Jeremy Scott dedicated his SS19 to the “fantasy of the design studio” — and the cult of the designer — to create 67 looks about making a show.

Suits, dresses and hosiery were covered in sketch marks, while a parade of themed eveningwear — a golden needle-fringed dress, scissor gown and a tailor’s-dummy body suit wrapped in a measuring-tape shrug — all added to the drama. Models trailed bolts of material behind their dresses, as though rushed from the dressmaking table.

The silhouette was sharp-tailored Eighties Saint Laurent. Gigi Hadid was the couture bride, attended by a troupe of Lycra-clad extras and a swarm of fashion butterflies. It was silly as hell, just as Moschino should be. Scott is a consummate showman — his brilliant backstage debriefs are a performance in themselves — and he brings a charm to fashion week around which you cannot stay po-faced.

Prada goes old-school — and everybody loves it

A Miuccia Prada feminist is always the most feminine of creatures. The signatures of the house were writ large on the catwalk, and the show featured tonnes of wearable clothes. After a long spell skulking around in Gucci’s shadow, the buzz around Prada is palpable again.

Fendi SS19 was rooted deep in earthy neutrals, and an espresso shade of brown. Although Karl Lagerfeld wouldn’t call it brown. “I would say off-brown, I think,” he said backstage.

His summer collection, which he co-creates with Silvia Venturi Fendi, drew on utilitarian influences and then delivered them in “baroque” style. Which meant, effectively, that they looked less street.

Giant square pockets were set on to blazers and jackets, and looks were fastened with toolkit-style belts. Bags were designed to blend with the clothes. It was practical design, for people who never need to be practical.

And there were no logos. The Fendi front row was filled with millennials wearing looks from the brand’s collaborative range with Fila: Nicki Minaj was head to toe in it. But Lagerfeld says he is done with “logomania”. No doubt he’s already bored of “off-brown”, too.

Ian Griffiths’ goddess-themed collection was anything but ethereal. The show featured smart tailoring, a slick palette and a sophisticated polish — the perfect armour for the urban warrior.

In a season which has increasingly looked to the bourgeois wardrobe of the working professional, Max Mara, which was founded in 1951 to dress the “doctor’s wife”, was bang on message. And the diversity of faces on the catwalk helped to make it fresher still. 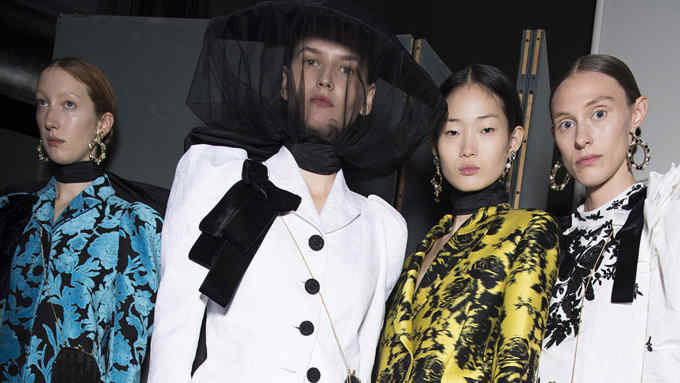