It has been about eight years since a protest outside his restaurant in Soho, London, turned Alexis Gauthier against foie gras. Confronted with compelling arguments about the cruelty involved in its production — the “fat liver” comes from ducks and geese that are force-fed — the Michelin-starred chef decided he could no longer serve it.

In fact, the encounter led to a broader change of heart: Gauthier became vegan and moved his restaurant away from animal products. But, now, he is willing to consider putting foie gras on the menu again — provided it comes from a lab, such as the one where French start-up Gourmey is producing a cell-based version of the delicacy.

Though Gauthier has yet to taste it, he welcomes the arrival of a cruelty-free alternative. “I think it’s a good place to be when we have to wonder whether it’s lab-grown or not,” he says.

Gourmey is not the only company working on cell-based gourmet foods. Fish maw and shark fin, premium ingredients in Chinese and other Asian cuisines, have attracted the attention of other biotech start-ups. Their efforts are good news for chefs and consumers who do not want their food to be tainted by worries about cruelty or sustainability.

Fish maw, the swim bladder of a fish, can sell for tens of thousands of dollars per kilogramme. This has fuelled an illicit trade in maw obtained from the totoaba, an endangered species found off the coast of Mexico that is also the most prized source of the ingredient. Demand for shark fin has similarly led to overfishing, including the cruel practice of “shark finning” — cutting fins off live sharks and throwing them back into the sea to die.

High prices, together with the possibility of regulatory bans, make producing alternatives to such foods attractive to cell-based protein companies, which cultivate animal cells at volume in laboratories and try to give them the taste and texture of conventional meat or fish.

However, it is difficult to make products viable. While the carbon footprint is potentially much lower, the costs are currently much greater. In the case of gourmet ingredients, that price differential between laboratory and conventional versions can be smaller, but there are still regulatory barriers to overcome: so far, Singapore is the only country to have granted approval for lab-grown meat to be sold.

Avant Meats, a Hong-Kong-based start-up that also makes lab-grown fish fillets, has developed a cell-based fish maw. Although this is not on the market yet, chief executive Carrie Chan says several restaurant chains have expressed interest, prompted partly by sustainability concerns but also by the potential for managing costs.

Natural fish maws come in different grades with variations in shape and size — and therefore price. The cultivated product comes in a ready-to-use package that is easy to portion.

Hong Kong chef and restaurateur Eddy Leung, who has worked with Avant Meats to serve its fish maw at private tastings, thinks its ease of use, with no need for hours of soaking before cooking, will appeal to home cooks. He also says it tastes no different if used in soup, though he is not sure that it is yet suitable for more sophisticated dishes such as poon choi, which requires sustained braising.

Chan compares the fish maw market to that for diamonds, and acknowledges that the top “investment grade” segment, where rarity is a significant part of the appeal, may be immune to lab-grown efforts. Her aim is to target the lower, more commodified segment, just as the companies that manufacture lab-grown diamonds do. “Like accessories,” she explains. “Not super expensive accessories but nice and decent accessories.”

Efforts to replicate shark fin remain more speculative. New Wave Foods, a seafood alternative protein start-up based in the US, announced plans in 2015 to develop a biotech version, but it has since focused on plant-based shrimp. The Future Market, a US-based “futurist food lab”, offers “Faux Fin” soup — but only as a “concept product” intended to illustrate one possible outcome of food-tech trends.

Whether cell-based delicacies can ever become mainstream may depend on shifts in food culture. Unlike commodity proteins — the focus of many cell-based start-ups — gourmet foods are prized not just because of their culinary qualities but also because they signal status.

Fuchsia Dunlop, a food writer and cook who specialises in Chinese cuisine, says broad consumer acceptance will depend on first winning over customers who demand natural fish maw and shark fin for special occasions such as wedding banquets — to display their hospitality and wealth.

Regulation can play a part. The Chinese government is trying to encourage more sustainable eating habits and, from next year, New York will ban foie gras produced by force-feeding. Its production is already banned in countries including the UK, Germany, Turkey and Australia.

Although some connoisseurs deplore its disappearance, others point out that culinary traditions are about far more than particular ingredients. Gauthier says the philosophy and techniques are what really matter in French cuisine. Foie gras used to be just one of the instruments he used; now, his instruments are vegetables — and in time, perhaps, cell-based products.

Dunlop makes a similar argument about Chinese food: even if a perfect cell-based replica of fish maw proves elusive, the cuisine is rich and complex enough for those who shun the natural version not to miss out. “There are already plenty of other possibilities within the culinary tradition itself,” she says. 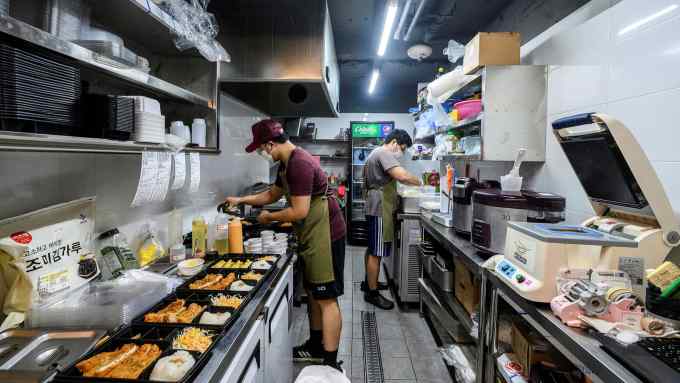