Don’t count on seeing Max Rocha front of house at Café Cecilia in Hackney when it opens in mid-August. “I’ll be in the kitchen,” he insists. “I don’t want anyone to see me. I just want to cook. That’s where I’m happiest.” No laps of honour for this 31-year-old chef-patron. And yet this place is so personal, you can’t help seeing him wherever you look.

Take the name. Cecilia was his grandmother, the late mother of his fashion designer father, John Rocha. “My dad grew up in a council estate in Hong Kong, one of seven brothers and sisters,” he says. “Cecilia saved up money with her poker buddies to get Dad a plane to London, where he studied fashion and made a success of his life. This restaurant is an ode to her.” Cecilia is also the middle name of his fashion designer sister, Simone.

Naturally, his father and sister have weighed in on the design (“everything from the building to the aprons to the music”) and the 45-50 cover dining room, which overlooks Regent’s Canal, is bright and airy with white walls, an open kitchen and a large refectory table at one end. On the wall hangs a photograph by Perry Ogden (a family friend) from his “Pony Kids” show from 1999, which Rocha remembers seeing as a kid.

Making soda bread one day, he found that the kneading helped him get out of his head

The ethos of this place also feels personal to Rocha, who talks about it almost like a refuge for him and his staff. Rocha hasn’t always had the easiest time. Up until seven years ago, he worked in the music industry. The stress got to him, he quit and was diagnosed with depression. Making soda bread one day, he found the kneading helped him get out of his head. His mother enrolled him on a baking course, which convinced him he wanted to spend the rest of his life in a kitchen. “Food saved me” is how he puts it now. Soon he landed a job at Skye Gyngell’s Spring, followed by stints at St John Bread and Wine and The River Cafe. Working as a line chef gave him the confidence to “be my own person for the first time in my life,” he says, not just his father’s son or sister’s brother.

But his family had concerns. Restaurants are high-pressure environments. Despite his obvious commitment, Rocha was repeatedly burning out. The turning point came working under Farokh Talati, head chef at St John Bread and Wine, who supported and encouraged him. “Farokh is the reason I’m here,” says Rocha. “I learned from him how to treat staff, be kind and listen to how people are actually feeling.”

Applying those lessons, Café Cecilia will open for breakfast and lunch only (and build up to dinner) so staff can maintain some sort of work-life balance. Having assembled his “dream team” of former colleagues, he says simply: “I feel safe. They understand the food I want to cook and respect me as a chef. I just want to make this place work and have a happy career.”

Rocha has already drafted menus for the coming year according to what’s seasonal. Breakfast dishes include white pudding and brown sauce, house sausage, borlotti beans and fried eggs, and a “beautiful bacon sandwich”. Several lunch plates are inspired by Rocha’s early years in Dublin. “We grew up eating a lot of ham,” he says. Hence the Middlewhite collar with braised chard, and ham hock and chutney sandwiches.

The Irish influence doesn’t end there. On asparagus, you find delicate curls of coolea, a smooth, Gouda-like cheese from Cork, while the dressed crab comes on Guinness bread, which is hearty and sweet from treacle in the dough. This also turns up on the breakfast menu with seven-minute eggs or toasted with preserves, as well as crumbled into ice cream for a delicious lunchtime dessert. You can order Guinness by the pint too. 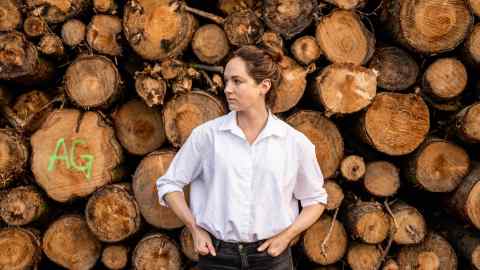 Of the dishes I try, my favourite is the house terrine (a pork, apricot and pistachio version) with semi-jammy apricots and plenty of sweet/savoury/salty flavour. It’s so appealing I give up rationing myself in the face of other dishes to simply dive in. I also fall hard for the raspberry and almond tart, which is buttery, biscuity and indisputably lovely. These, it turns out, are Rocha’s favourite dishes too. “I like the process of making a terrine,” he says. “Lining the tin. Cooking it in a bain-marie. You feel like a real chef. And I love making tarts. I mean, I love it. There is nothing I enjoy more.” He recalls something said by his former boss at St John, Fergus Henderson, that how you feel shows in the food. Judging by these, Rocha is having a ball.