Could a dance coach boost your career performance?

From creating charismatic boardroom presentations to choreographing catwalks, the movement director has emerged as the most elegant of mentors

Joaquin Phoenix used one to prepare for Joker. The senior team at JP Morgan has several on staff, as does the FBI. John Galliano and Marc Jacobs use them to create global fashion moments. The movement director comes in a variety of guises, including choreographer and coach (or even fashion designer if you’re Saul Nash, the young movement coach who radically choreographed his autumn/winter 2020 fashion show for Fashion East last month), but all are employed to finesse our lives, whether that be in preparation for a role or to help project the values of a brand. Increasingly, they’re also being used to hone poise at a more personal level, training people how to connect with an audience, TED-talk style; how to establish trust around the table; how to run, dance and even date. From power moves to happy moves, we could all do with a bit of movement direction, it seems.

It’s not always easy to stand out at fashion week, especially when you’re a male model in a female-led show. But Leon Dame has become a sensation in recent seasons owing to the extraordinary moves he brings to Maison Margiela’s shows. Spring/summer 2020 found him strutting in stilettos, lunging at startled members of the front row. In January, he brought an equally compelling extravagance and broody glamour to the house’s haute couture.

Dame worked with Pat Boguslawski, a former dancer who started as a movement director while modelling for designer Sarah Burton at Alexander McQueen. “Sarah said the way I moved expressed the mood of her collection. She asked me to teach the other models.” At Margiela, with Dame, he’s found a perfect muse. “John [Galliano]’s clothes had a really strong look,” he says. “I wanted Leon’s walk to be just as powerful.” Today, everybody wants a piece of Boguslawski. It’s unsurprising. The fashion campaigns he works on are magnetic: Rita Ora sunny and sexy for Escada; Kendall Jenner cartwheeling for Longchamp; Winnie Harlow and Hailey Baldwin crackling with sass as Tommy Hilfiger Icons. He’s worked with Vogue, with Victoria Beckham, and on numerous fashion shoots. “A lot of people don’t know what to do in front of a camera. I help them,” he says.

On film sets, movement directors are increasingly vaulting on from choreographing dance scenes to working with actors to create their characters. For his Oscar-winning performance in Joker, Joaquin Phoenix worked with movement coach Michael Arnold to develop the role’s physicality – originally there was to be far less movement, then they started watching videos of dancers and the expression of a whole new dimension to the character emerged. Similarly, when Polly Bennett worked with Rami Malek to shape the role of Safin, the villain in the coming Bond film No Time To Die, they studied the movements of a host of baddies to understand “what it is that makes them villainous” and then, through physicality, “how do we create a new villain?”. The two had worked together on Bohemian Rhapsody, with Bennett spending hours decoding Freddie Mercury’s showmanship to help Malek step into the role. “Your body is made up of the things you’ve done in your life. I look for clues,” she says. She unpacked, for example, the fact that Mercury played golf and that the dramatic swing of his half mic was related to that of a driving iron.

It’s a similar deal with Elvis, whose physical expression Bennett is currently mining for the Baz Luhrmann musical biopic that stars Tom Hanks and Austin Butler. “To understand all the things he does on stage, we looked at how he was brought up, who he was around,” she says. Or with the Queen, whom Bennett studied to help Olivia Colman on The Crown. “Part of being the Queen is there’s always someone to guide you. So you never need to turn your head.” Off-screen, Bennett also helps executives embody their brand and message when communicating to an audience. Often, she says, a client will have a brilliant mind but their physicality lets them down: “There’s a lot of self-criticism and it holds you back. We all have physical tells that give us away. I break clients free of them.”

Much investment has been placed on how to carry yourself in a public arena. Caroline Goyder – a voice specialist who charges up to £1,000 for one-on-one hourly coaching sessions, whose TED talk on overcoming stage paralysis has had 7.5 million views, and who recently published the book Finding Your Voice: Secrets To Speaking With Confidence – says movement should be central to your preparation. “The heads of corporates often ask me the same thing: how to do a TED-style talk. They know they need to come across as conversational but have no idea how. To appear natural, you need to inhabit a feeling of ease. The audience will read your body at an unconscious level. If you relax, they relax – and they will start to trust what you are saying. The problem, of course, is that you dash to your event juggling calls from four continents; you’re holding your breath tight in your chest; your nervous system is locked in flight or fight.” To shortcut yourself out of adrenaline mode, “movement is really useful. The body responds more readily than the brain, so you can send the brain positive calming signals by taking 10 minutes to do yoga, or even just to shake out your limbs, roll out your shoulders, and – most important – breathe deeply.”

Joe Navarro is a former FBI agent. These days, the bestselling author of What Every BODY Is Saying has regular gigs from multinational financial organisations to Harvard Business School, where he teaches body language in the boardroom. Female executives often gain a huge amount from his direction, he says, especially when it comes to “owning their space. ‘Command presence’ is something they teach in the British and the American military – how you hold yourself, how you move. It gives you an edge.” He recalls working with JP Morgan asset and wealth management CEO Mary Erdoes: “She has a wonderful commanding presence: in her poise, in the way she walks into a room. She exerts influence.”

That said, the days of the stronger handshake or a gusset-wrenching power-stance are over. Today, “command presence is an attitude of confidence: the confidence to make broad, smooth, wide gestures; to stand without fidgeting; to hold your body upright; and make eye contact,” says Navarro. The name of the game is building relationships. Navarro talks in terms of fostering harmony or synchronisation – “If you lean back and relax, it behoves me to do the same,” he says. “If I am leaning forward, we are out of sync.” It’s the same with speech: “Are they a fast or slow talker? Should I slow down my conversation?”

“Pause to register your movements and those of the other person,” advises Anne-Maartje Oud, founder of The Behaviour Company. “Ask yourself, can I change the tenor of this interaction by adjusting something physical – is the way I’m standing signifying dominance? Would my being further away or sitting down give them comfort and lead to a more productive conversation?” This kind of deportment advice works with employees. It’s also great with children. And romantic partners. At matchmaking agency Drawing Down The Moon, dating coaches advise clients never to sit opposite one another on a first date. “It feels confrontational, like an interview, which is absolutely not what you want,” says CEO Gillian McCallum. “If you can, go for a walk, shoulder to shoulder. Moving together builds a sense of rapport, a dynamic connection.”

Legendary choreographer Twyla Tharp recommends that everyone keep some power music for moments of need. “On days when you need all the help you can get, nothing promotes the victory rush like [certain pieces of] music,” she writes in her new book, Keep It Moving. “As we get older our bodies enjoy less freedom of movement, we tend to take up less space.” Fight it. “Dancers are taught to move so that every gesture is not only more precise and elegant but bigger. We call it amplitude.” Expansive movement, she holds, fosters expansive thinking.

Even something as straightforward as lengthening our stride brings benefits. “As we spend time sitting down or staring at a phone, our posture changes,” says Mike Antonaides, founder of the Running and Movement School in London. “Everyone who comes here has to relearn how to walk. We re-educate the neural pathways in the brain that activate your muscles, returning people to the natural movement pattern they had as children, including longer stride length with arms swinging cross-laterally [left arm with right foot].” Sound simple? Absolutely. But it works.

At its heart, movement direction is about how you best use your body; about moving with intention and grace. At times the focus might be embodying the rock-godliness of Elvis or the cool attitude of Margiela. It might be about connecting with your staff or your audience; often it’s about connecting with yourself. “If I work with a movie star or politician or on a hip-hop commercial, I feed in the same information,” says Bennett. “Movement unites us on a profound level.” The basics are simple. Breathe deeply. Move with focus and (appropriate) amplitude. “By my definition, to move is to dance,” says Tharp. “Choose to make your life bigger. Shut up and dance.”

Explore the series
READ MORE3 min
Dancers explore how coronavirus has changed the way we move, touch and connect 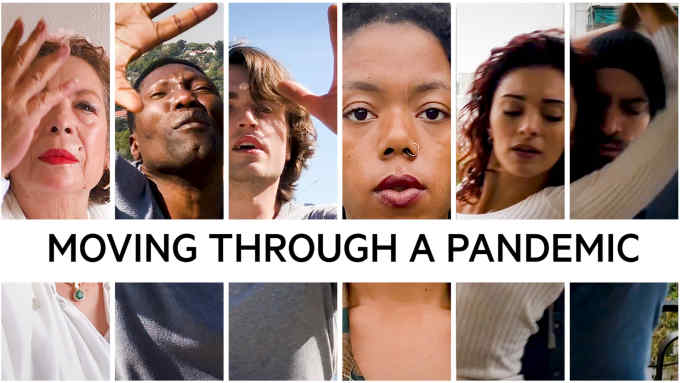