Riccardo Tisci’s debut collection for Burberry was terrific. The Italian-born successor to the house’s former artistic director (and one-time chief executive) Christopher Bailey, who stepped down in February, arrived in London last spring and has been keeping the lowest of profiles ever since. He revealed a new logo and a rebranded house print last month, via social media. On Monday night, we got our first look at the rest.

To quote The Breakfast Club, it was a collection in which “all the food groups were represented”. First came the “refined” section: smart beige trenches and sensible suits. For the women, there were swingy pleat skirts, silk scarves and an archive-like take on the famous house check. There was a pinstripe suit and “English fit” tailoring for the chaps. It was elegant, relevant and relatively benign.

The womenswear was chic. A relief. Tisci has said that he wants to “own beige”, and in a season that has been swathed in the shade, he made a fairly convincing claim. The menswear featured double-breasted jackets and business trousers that were made for proper men: fairly roomy in the seat and straight on the leg. Neither too skinny, nor too spivvy, they looked the kind of thing a swaggering sort of bloke might wear in the pub after a good day on the trading floor.

The next section was younger, more rebellious and sneaker-shod. In his previous job at Givenchy, Tisci was among the first to identify the streetwear trend that has come to dominate fashion, and here he delivered it again. The lengths were girlish, short and punky. The women wore patent Mary Janes that looked like Dr Martens with white ankle socks. The boys wore T-shirts, long Lycra sleeves, and outerwear marked with strange cut-out bits. Clothes were branded with his take on British emblems: the words Who Killed Bambi, the title of the Sex Pistols album, were stamped on T-shirts and jackets. Shakespeare quotes were sprinkled around. As was the word “cow”, which Tisci considers to be an essentially British animal.

The last section introduced eveningwear, a new concept for the brand but something of a specialist skill for Tisci who has, in the past, delivered red carpet showstoppers for Cate Blanchett and Julia Roberts, tour clothes for Madonna and, of course, a Kim Kardashian wedding gown. These were simple jersey dresses in stretchy black. They were tasteful rather than thrilling, but pointed to the potential for more eveningwear to come.

Altogether, it was a comprehensive first outing: with its sportswear, street smarts, suits and heritage designs, Tisci pulled together a collection that checked all the category boxes (although his use of the house’s trademark check was quite restrained). He described his Burberry as being for “mothers and daughters, fathers and sons”. And despite its many chapters, the 134 looks hung together well. Commercially it was very clever. There was something here for everyone, from Korea to Kirkcaldy.

Tisci’s new role brings with it an unprecedented level of scrutiny. The Burberry brand has become entwined in recent years with our sense of the state of British fashion generally. It holds a fascination even for people who care almost nothing for fashion at all. And it’s coming out of a rough patch. “According to its last quarter results, growth has been modest and slowing at 3 per cent,” says FT finance editor Robert Armstrong. “Stock has had a great two year run, but has been flat all summer.”

Under chief executive Marco Gobbetti, who worked previously with Tisci at Givenchy and who arrived from the LVMH-owned Céline last year, the company has been taking measures to kick-start the brand and elevate the product. But even with Tisci at the helm, Gobbetti anticipates that sales growth and bigger margins “will take time”.

The most compelling part of the rebranding, however, is the story that Tisci himself has to tell. The son of a working-class single mother, he grew up in a large Catholic family in southern Italy, and arrived to study fashion at Central Saint Martins when he was only 17. In London he became a designer. “It’s where I got my push to get on with my life,” says the 44-year-old of his fondness for the city that is now his home. “It’s where I learnt to become who I am.”

Tisci’s Burberry dipped through many decades. It put the archive to good use. It delivered tonnes of options. But the result was unmistakably his Burberry. Massive Attack played, the soundtrack of the early Nineties culture in which he found himself reborn. The best models walked — the kind of models, such as Freja Beha Erichsen, Rianne van Rompaey, Kendall Jenner and Mariacarla Boscono, who would never ordinarily set foot on a London catwalk if it weren’t for him. The design, while different, was distinctly Tisci. It was thrilling. Having Tisci on the schedule gives London fashion a new energy. Never mind elevating Burberry, having him at the brand elevates the whole week.

Explore the series
READ MOREWomenswear Spring/Summer 2019 shows
To trend or not to trend: London is lit up in neon — and hats 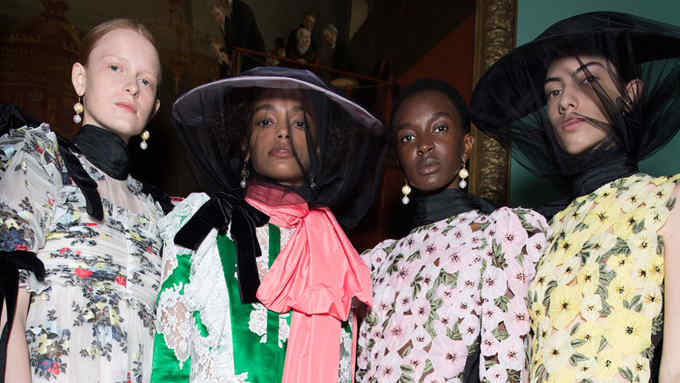