To trend or not to trend: London is lit up in neon — and hats

We can probably thank Prada for the profusion of neon at the SS19 shows, Valentino for the colour-saturated gowns, and Marc Jacobs for the bolder shoulders — and the hats. Each was a huge feature of their AW18 collections (although it was Valentino couture in July that really put Crayola colour on the map), and most every catwalk in London this season has featured one or all three in the mix.

There were neon mint devoré silk and icy-blue gauzes at Rejina Pyo, adding interest to a sweet, beige-based collection in which the Korean-born designer also showed oversized sunhats. At Roksanda there were fluoro yellow scarf details, as well as floaty evening gowns in highlighter yellow, orange and pink. Emilia Wickstead showed fuchsia- and citrus-coloured eveningwear, along with broad-shouldered suits.

None could be accused of chasing a trend — the collections were singularly their own. But it’s interesting to see how in this world of transeasonal, non-specific outfitting, a theme can still take hold.

For Erdem Moralioglu, neons were merely an accent in a collection that was focused on another subject du jour: cross-dressing. This season the designer was exploring gender and identity — the clothes we use to show off, and the ones which conceal.

His approach was more academic than some. Following a house move to Bloomsbury, Moralioglu had been struck by a plaque honouring Victorian “sisters” Stella and Fanny: the early gay-rights advocates and cross-dressers Frederick Park and Ernest Boulton, who were arrested for gross indecency in 1870 and fought a highly public court case to be acquitted of the charge. The discovery led him to the National Portrait Gallery, where he studied Victorian transvestism further, and his SS19 was an homage to the male and female cross-dressers of the age.

Masculine tailoring, Edwardian slippers and double-breasted blazers were tempered with big veiled boater hats, corset tops and flamboyant floral gowns and frills. Sumptuous lace dresses clasped high on the neck and swept along the floor, a puffed sleeve was in-set on the arm. The two men who snuck on to the catwalk — “Stella and Fanny” — were distinctive only for their hairy legs.

The clothes were a boldly theatrical move from a British designer who is known for his softly feminine dresses. But while the collection wasn’t so obviously wearable, I fell for the story at its heart. And the craftsmanship, which bonded Victorian dressmaking techniques with more contemporaneous materials, such as a jacket which had been boned, inverted and fabricated in scuba. The fashion industry has a fetish for narrative — this one was a cracker.

No neons for Christopher Kane, who has used it as part of his signature for the past decade. He once told me that he bins any ideas he’s seen elsewhere — which can be quite a challenge in the lead-up to a show.

In his first collection since he opened talks to buy back his label from the Kering group earlier this year, the designer was as buoyant and bolshie as ever. Themed around sex — his favourite subject — the collection featured lots of lace, red and logos that said things like “horseplay”, “foreplay” and “animal sex”

Many of these are familiar words in the Kane lexicon, but they were worn quite lightly here. As part of the Kering corporate machine, he was encouraged to lean heavily on his codes to drive home his “DNA”. This time around, and in a season he could have owned neon, he simply switched it off. “Been there, done that,” he said backstage. “That’s all behind me now.”

Explore the series
READ MOREWomenswear Spring/Summer 2019 shows
If shoes are the symbol of resistance, let’s call time on the stiletto 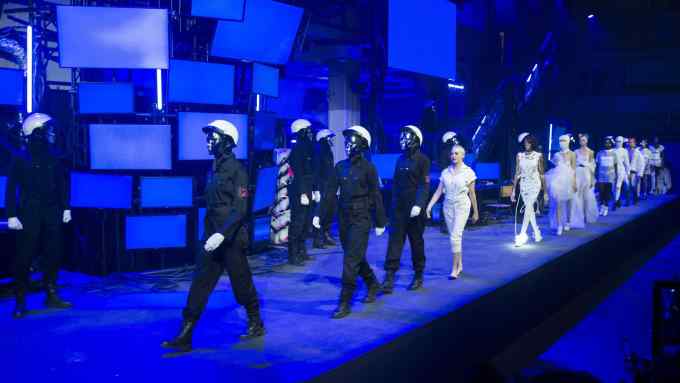