The kids are alright at Richard Quinn

Last season Richard Quinn had Queen Elizabeth II on his front row — a historic fashion moment. So how could the 29-year-old designer top that for Spring? The answer lay close to home. Quinn invited children from schools he had gone to — Chislehurst and Sidcup grammar, St Thomas More Catholic comprehensive and Central Saint Martins — to take the best seats in the house. “At a time when real damage is occurring to arts education,” said Quinn, “I want to point to how its creative power lights the paths to our future.”

It was a serious statement of intent. And although Quinn had models walk in the vibrant florals that are his trademark, he also showed a more grown-up sensibility. His Twenties-style flapper dresses were encrusted in beads, while trousers were covered in ostrich feathers and a coat came in a patchwork of different animal prints. The beauty looks, which occasionally can distract from a collection, complimented Quinn’s designs. Hair was styled into textured waves or chic up-do’s all created by lead stylist James Pecis for Mr. Smith.

Burberry’s new creative director Riccardo Tisci came to London as a shy 17-year-old from a sheltered southern Italian family, and found himself reborn in the capital. “It’s where I learnt to become who I am,” says the 44-year-old.

With his first show for Burberry, Tisci repaid the favour to his adopted city tenfold, with a collection that ticked all the category boxes, from sportswear to suits and heritage designs.

Models walked for him who would never normally set foot on a London catwalk, from Freja Beha Erichsen, Rianne van Rompaey, Kendall Jenner and Mariacarla Boscono. His presence in the city brings a new vigour — and deeper gravitas — to its fashion week schedule.

Last season, Kane focused on his favourite subject: sex. For his AW18 collection, he sent models down the runway in sheer red lace dresses and feather-necked silk camisoles emblazoned with Chris Foss’s illustrations from The Joy of Sex.

For Spring, he developed the theme further, turning to the animal kingdom for inspiration. His tongue-in-cheek designs featured praying mantises locked in acts of “sexual cannibalism” and leopards tussling alongside the word “foreplay”.

Gender fluidity has been a buzzword in fashion for a few seasons now. But in the hands of Erdem Moralioglu it took on another texture entirely. Following a house move to Bloomsbury, he had been struck by the plaque honouring Victorian “sisters” Stella and Fanny, the early gay-rights advocates and cross-dressers Frederick Park and Ernest Boulton, who were arrested for gross indecency in 1870 and fought a highly public court case to be acquitted of the charge.

That discovery led Moralioglu to the National Portrait Gallery, where he studied the case further. And his SS19 was an homage to the male and female cross-dressers of the age.

Sumptuous lace dresses clasped high on the neck and swept along the floor, a puffed sleeve was in-set on the arm. The clothes were boldly theatrical for a designer who is best known for his softly feminine dresses.

There were “punky” notes, also — a neon glove in nappa leather buttoned up to the elbow, and looks were shot with bolts of bright silk. Many of the models wore a wide-brimmed hat — like an exploded boater — with a black lace veil. Hats have been a feature of the SS19 shows; why? For Moralioglu, the hat obscures identity — another way to conceal one’s real self. Whatever else, it’s an excellent solution for a bad hair day.

Chinese spice and everything nice at Simone Rocha

For SS19 Spring, Simone Rocha looked east, taking inspiration from qingming (a Chinese festival in which families honour their ancestors) and 18th-century chinoiserie, and west, to her family home in Ireland, and the ritual of Sunday Best.

Puffball tulle dresses covered in intricate brocade flowers floated past, while models’ faces were shrouded in lace-trimmed veils that hung from wide-brimmed hats.

The footwear was equally delightful, with crystal-embellished jelly shoes and pointed slippers festooned with feathers.

There was nothing dramatically new here, but Rocha’s codes are some of the strongest on the circuit, and she’s been wise to stick to them. The mood was intense and evocative. A really beautiful show.

For her SS19 collection, the stalwart British designer revealed another set of collaborations. The theme this time? Sports.

“I wanted the show to prove that I’m serious about this business,” said Alexa Chung, following her catwalk debut on the London schedule. “I’ve been doing this brand for a while now,” she continued, “and I wanted to emphasise that I’m in it for the long haul.”

Models walked a set decorated with cast-iron railings. Following Telfar’s chain-linked cage in New York, and Matty Bovan’s picket-topped millinery: could fences be a new trend? To quicken the pace, Anderson collaborated with Converse for a third consecutive season. For AW18 he sent out rainbow soles, but for SS19 it’s all about the platform. According to Anderson “it’s all about accessibility, I’m mindful of my price point”. His last collaboration with Converse was sold out. No doubt this will be too.

The setlist at House of Holland

Aside from the neon sequinned sports-luxe clothing, what really struck a chord at Henry Holland’s SS19 show was the music. Nick Grimshaw, who recently left Radio 1 after six years of hosting the breakfast-show slot, composed the soundtrack under his DJ name Grimmy. According to Holland the duo “talked about it one night, and with [Grimshaw’s] new schedule the show seemed like the perfect time”.

The music focused on female artists and empowerment and featured songs by London-born rapper Nadia Rose (front row next to Grimshaw), the Yeah Yeah Yeahs and British rapper MIA.

For her 10th anniversary collection at the Roundhouse, Camden, the Greek-born designer reflected on the idea of accumulation, and a collection “of objects . . . to record, to study and identity, to protect and cherish”. Katrantzou showcased a series of five themes, each inspired by different objects that “obsess women”: works of art, insects, jewellery, perfume bottles and postage stamps (who knew?).

Models walked cocooned in bug-hued emerald green plastic shells with wobbling antenna caps, while others wore wasp-waisted flacon gowns in sparkling black and silver. Soundtracked by Vangelis, the finale revealed a collection of Katrantzou’s own: an array of mannequins dressed in a decade’s worth of her designs. 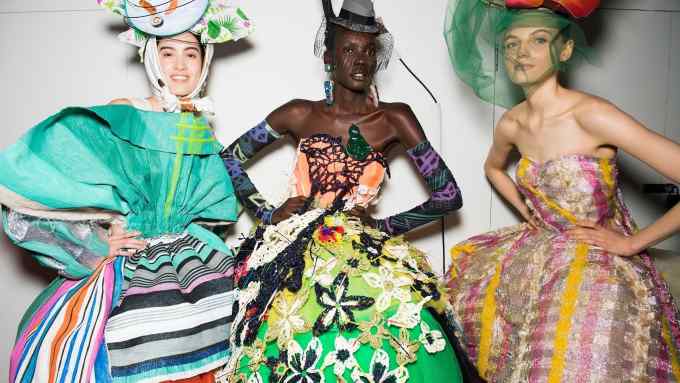