Showcase for the season

Booths at the Frieze fairs are an ideal shopfront for the new artist representations that galleries have secured since the summer. So for Frieze London this week, Marian Goodman gallery brings an installation of works by Nan Goldin, a photographer whom it now represents globally. Goldin, who wrote on a recent change.org petition that she “narrowly escaped” the opioid crisis, has taken a public stance through her activist group Pain (Prescription Addiction Intervention Now). The photographs at Frieze, dating from 1978-2016, are no less punchy.

Over at Frieze Masters, Gagosian shows its new global representation of the Man Ray Trust with paintings, photographs, sculptures and other works by the late avant-garde artist. Some items, including “Pince à Linge” (c1975), comprising nine clothes pegs made by the artist, have not been shown since leaving the artist’s studio when he died in 1976. The majority of works on the booth will be for sale for between $20,000 and $2m-plus.

Are street art’s days numbered? The director of London’s Moniker urban art fair has predicted the “death” of the form. “I’ve been watching it happen gradually, but the rough-around-the edges, quick and secretive technique that defines ‘street art’ has evolved. Now it’s about fine artists who happen to use the street as their canvas — often with the support of a local council or major property developer,” Tina Ziegler says. She highlights the Paris-born Bom.K and the American Ann J Lewis as artists who have branched beyond their graffiti roots.

Ziegler has spotted another shift. “We have fewer galleries at the fair this year but many more artists showing directly through us and going straight to collectors that way.” Moniker’s 10th edition opens at the Old Truman Brewery on Thursday.

Ceramics are all the rage this season as both Christie’s and Phillips have dedicated auctions this week (October 2 and 5 respectively) while Gagosian’s Geneva gallery opened a show of contemporary ceramic vessels last week (Fire and Clay, to December 15).

“Contemporary collectors ask me almost daily where you can find value and I point them in the direction of Modern and contemporary ceramicists,” says Henry Highley, Phillips’ 20th-century and contemporary art specialist, adding that he sees the area as a “new collecting category”.

This week, Phillips offers 32 unique items (total estimate £2.5m to £3.7m), including familiar fine artists such as Roy Lichtenstein and Lucio Fontana alongside 19th- and 20th-century ceramicists such as George Ohr and Lucie Rie. Christie’s offers 37 lots for between £2.2m and £3.2m.

In December, Phillips made a record for a 20th-century ceramicist when Peter Voulkos’s sculpture “Rondena” (1958) sold at a design auction for $915,000 (with fees) — not cheap, but considerably below the prices paid for prime postwar paintings.

The 1-54 contemporary African art fair, which also opens in London this week, has found a sought-after Manhattan venue for its fifth New York edition in May. To date the fair has been held in Red Hook, Brooklyn, which gave it a trendy feel but was a bit of a trek for most — not least as it coincides with Frieze New York’s far-flung (in a different direction) fair on Randall’s Island.

The African fair will now be housed in the Industria building, a former garage near the Whitney Museum of American Art in the West Village. 1-54 director Touria El Glaoui describes the area as “the beating heart of New York’s art world,” and the more central space should help expand the fair from the 21 galleries that showed this year.

Local galleries were looking on the bright side at last week’s Contemporary Istanbul fair, despite Turkey’s recent political and economic turmoil. “We’ve priced some works in lira, which is good for overseas buyers as some work is suddenly very cheap,” said Doğa Okay of Istanbul’s Sanatorium gallery. Indeed, Zeyno Pekünlü’s compelling video “A Bathroom of One’s Own” (2015) at her booth seemed very reasonable at 7,000 lira (£865). Okay also reported Turkish buying, across currencies, including of both editions of “The Monument and the Child” (2010), a carpet by Gülsün Karamustafa (€38,000 each, represented by Büro Sarigedik). Local and overseas galleries also reported sales including to British, American and Hong Kong buyers.

It was difficult to avoid domestic politics but quality at the fair has certainly improved. It also boasts a high number of young visitors (organisers report that more than 50 per cent were under 34 last year).

Enthusiasts of art market history helped nudge Sotheby’s sale of items owned by Frank and Lorna Dunphy ahead of expectations. Frank was business manager to Damien Hirst for 15 years until 2010, a period that encompassed the artist’s ambitious “Pharmacy” and “Beautiful Inside My Head Forever” auctions.

A wealth of satellite fairs taking place across the capital promise affordability, accessibility and a break from Frieze’s often frenetic pace.

Just 10 minutes’ walk from Regent’s Park, the Sunday Art Fair presents an opportunity to scout up-and-coming artists. Thirty young dealerships, of which over half are new this year, will present work in a vast subterranean space by Baker Street tube. Thoughtfully curated, and booth-free, the fair’s salon-like atmosphere sets it apart (October 4-7).

Another talent-spotting hotspot, The Other Art Fair turns 30 in October and marks the occasion with the launch of a second site. In addition to its Bloomsbury Victoria House venue, it takes over former St Martin’s building The College to mount “Not 30%”, a showcase of exclusively female artists. Expect to buy pieces directly from artists, and look out for work from guest creative duo The Connor Brothers (October 4-7).

Some 40 galleries specialising in contemporary African art converge on Somerset House for the sixth London edition of 1-54. A varied talks programme is curated for the first time by Ekow Eshun, featuring artists including Larry Achiampong, Modupeola Fadugba and Athi-Patra Ruga. Don’t miss the latter’s guest show Of Gods, Rainbows and Omissions, one of nine special projects this year (October 4-7).

For those keen to venture further afield, themes of diversity and inclusivity unite many special interest fairs across east and south London. Urban art fair Moniker takes on subjects of social, ecological and economic injustice through a tie up with Berlin’s Urban Nation Museum (October 4-7).

Cultural Traffic Arts Fair presents indy publishers, vintage books and countercultural ephemera. And Anti Art Fair positions itself as a “voice for change” in the artworld, offering free stands for emerging talent, and a strong representation of LGBTQ+ and feminist creatives. (October 4-7) 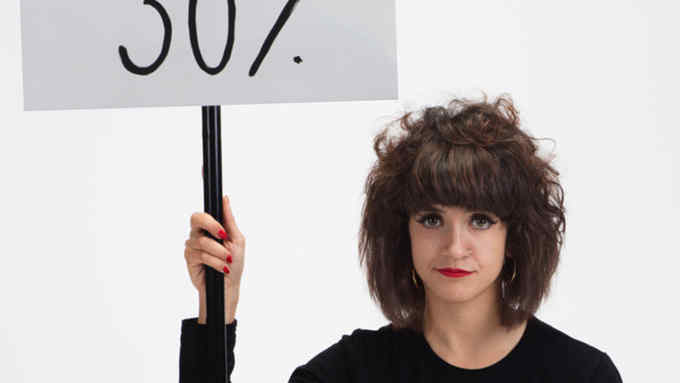