The country has plenty of hospitals but remains a digital laggard

In February 2020, Gernot Marx, an intensive care doctor at the university hospital in Aachen, found himself on the front line of Germany’s response to a deadly new disease.

Aachen is close to the town of Heinsberg, which became one of the country’s early infection hotspots as coronavirus swept across Europe. “It was the first pandemic experience for all of us,” Marx says. “The concern was also very high that you could become infected and get sick yourself . . . we had big problems at first.”

There were shortages of personal protective equipment, as in many other developed countries. But the main problem was that Germany’s decentralised healthcare system was not well connected or co-ordinated.

Early on, no one could put a precise figure on the number of intensive care beds in the country, let alone on how many were occupied. A reporting system was soon established “so that patients could be transferred to areas with excess capacity,” says Marx, who is also president of the German Interdisciplinary Association for Intensive Care and Emergency Medicine (DIVI). “You could say this should have been in place in the first place.”

Nonetheless, the benefits of Germany’s diversified system — built on a form of “solidarity” insurance introduced by chancellor Otto von Bismarck in 1883 — became apparent in the second and third waves of the pandemic, during which doctors in hotspots were able to send patients to less busy hospitals, and take advantage of the country’s comparatively large network of public and private treatment centres. 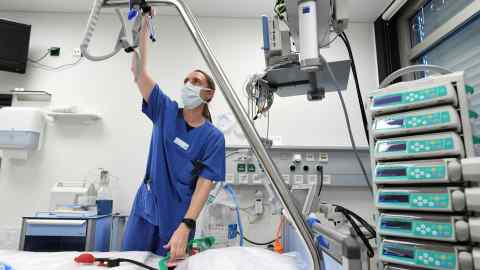 Germany has about 1,900 public and private hospitals for its 83m inhabitants, compared with the UK’s 1,200 for a population of 67m. It also spends more than €1bn a day on its healthcare system, according to the health ministry — the highest in any large European country. Consequently, it had far more acute care beds available than neighbouring states as the virus ran rampant.

Economists and rightwing politicians who had been calling for the number of hospitals to be cut largely fell silent once the pandemic hit, although private operator Helios maintained its stance that fewer, better equipped institutions would benefit patients.

While Armin Laschet, the centre-right Christian Democratic Union’s candidate for chancellor in September’s general election, defended the German system as better than Britain’s and Denmark’s, the leaders of the Social Democrats and the Greens called for a fundamental change to healthcare funding.

Their manifestos called for a “citizen’s insurance”, which would move the country towards a single-payer system akin to Britain’s National Health Service. It would replace the current two-tier system in which those earning below roughly €5,000 a month pay into a social insurance system, while those earning above that, and civil servants, can take out private insurance instead.

“Usually, the people that are part of the private system have better health and better education and, of course, high income,” says Mujaheed Shaikh, professor of health governance at the Hertie School in Berlin, and a contributor to a report by the Bosch Foundation, a charity, on healthcare in Germany. “This essentially creates this inequality within the insurance system, where risk pooling is affected.”

The current structure has resulted in more private facilities being built. While they enable patients to be treated sooner and in greater comfort, they also tend to produce poorer outcomes than public hospitals, Shaikh says. “[Private practitioners] get paid faster and they get paid much more . . . I think, if you change this reimbursement scheme, things will automatically change.”

But while a poll by public broadcaster ARD found that almost 70 per cent of citizens were in favour of a “citizens’ insurance”, the move has now been ruled out in talks between the Social Democrats, the Greens and the Free Democrats, as they try to put together a coalition to succeed Angela Merkel’s government.

One in five general practitioners still communicates by fax machine

Instead, the trio has committed to improving Germany’s system by accelerating the digitisation of healthcare in the country, where one in five general practitioners still communicates by fax machine, and where gathering patient data lags behind most developed nations.

An OECD ranking of the health information available to policymakers in individual countries found that only Ireland was worse than Germany, among European countries. It ranked last in the percentage of key data sets available.

“Zero per cent of the data which is extracted is extracted automatically from electronic claims or billing records in Germany,” says Shaikh.

Part of the reason a register of unoccupied intensive care beds was not available at the start of the pandemic was that the relevant IT systems had not been universally updated.

However, the crisis has helped accelerate the technological shift. Some 86 per cent of clinical doctors surveyed by the market research arm of Bitkom — a Berlin-based association that promotes the digitalisation of business — said they were broadly in favour of video consultations, electronic filing systems and app-based healthcare.

Marx is among them. A longstanding advocate of telemedicine, he has been part of a project in the state of North Rhine-Westphalia, in which doctors at Aachen treated patients in smaller hospitals — with less specialist expertise — remotely during the pandemic. 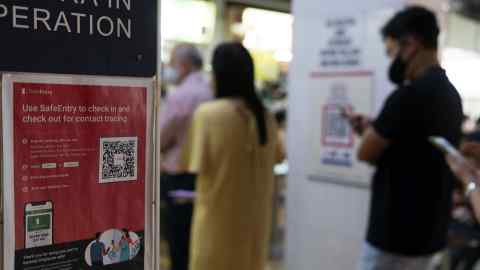 Thousands of “televisits” took place and, as a result, the mortality rate of Covid patients on ventilators was around 30 per cent, compared with 50 per cent nationwide, Marx says. This bridged the outcome gap between urban and rural clinics.

“We have seen that digital structures are absolutely essential for successfully coping with the corona pandemic, especially in intensive care,” he adds. “We must continue to expand [these services].”

Even with such encouraging results, though, Germany’s funding system could prove a hurdle.

“We had to transfer far fewer patients [thanks to the scheme],” Marx says. But while the virtual visits made during the Covid-19 pandemic were covered by the statutory system, the initial pre-pandemic pilot programme had to be funded by local government — because insurers balked at the extra cost.

Get alerts on Health Care when a new story is published