With its new Justin Bieber collaboration, the ‘ultimate mood-enhancing mobility brand’ has had a battery-powered makeover. Does it still have the magic?

V, E, S, P, A: five letters with the power to summon a tourist-brochure-perfect Italy. The shadows of cypress trees lengthening in the setting Tuscan sun; the winding roads of the Amalfi coast; the turquoise waters of Sardinia; a land of milk, honey, espresso, sprezzatura, pizza and Negroni. Vespa speaks of an Italy where the Vita is forever Dolce and where the national anthem is “Volare”. The two-wheeled distillation of what it is to be Italian, Vespa is surely the ultimate mood-enhancing mobility brand.

Some names have a magic forged over generations of liminal messaging. Vespa is one of them. It was an early beneficiary of product placement from postwar PR pioneer Count Rudolfo Crespi, who helped shape modern notions of Italy as the locus classicus of relaxed elegance. It has been said that the 1953 Hepburn/Peck moment in Roman Holiday sold 100,000 scooters. And I would argue that it is still selling scooters 69 years later. Even the electric Vespa that I take for a spin around Mayfair, with its digital instrument panel and smartphone connectivity, still pulls off the conjuring trick, transforming Mount Street into Strada del Monte, if only for a few moments. Its noiseless operation is disconcerting. Such was my expectation of the familiar soundtrack combination of rattle and whoopee cushion when I pressed the starter button that when I heard nothing, I thought of ringing Vespa to see what I had done wrong.

So, looking nothing like Gregory Peck and unaccompanied by engine noise or glamorous pillion passenger, I wobbled along Mount Street in silence from Italian tailor Rubinacci to take an Italian espresso around the corner at Harry’s Bar.

Acceleration could be brisker – the battery seems to weigh a ton, and wrestling the thing onto its stand was a mini workout (I think you have to be Italian to master that with apparent effortlessness). However... the smart silver battery-powered two-wheeler may have been made with 21st-century methods, material and preoccupations, but still has enough of the midcentury magic in its profile and detailing to make it more than just an ordinary electric scooter.

Charting this route between the Scylla of retro appeal and the Charybdis of technological advancement is the job of Michele Colaninno, the CEO of global strategy and product for the Piaggio Group, Vespa’s parent company. With the luxuriant collar-skimming hair and effortlessly confident manner of Luca Cordero di Montezemolo in his 1990s prime, leaning back in his office chair, 45-year-old Colaninno looks exactly how an Italian industrialist should look. Which is just as well, because in addition to being a business, Vespa is as much of a cherished part of Italy’s cultural patrimony as the Colosseum or Sophia Loren.

Named after the Italian word for wasp, the Vespa was the most potent symbol of Italy’s postwar boom. A prominent wartime aircraft manufacturer, in peacetime Piaggio turned its attention to getting a battered Italy moving again. But this being Italy, mobility was not to be achieved at the expense of chic. Motorbikes were big, dirty, and difficult to repair in the event of the frequent punctures inflicted by Italy’s war-shattered roads. The Vespa was easier to ride thanks to a gear lever on the handlebars, and tyres were easier to change thanks to wheels mounted not on forks but aircraft-inspired supporting arms. Crucially, the step-through design and shield-like bodywork protected the driver from getting grimy or dishevelled. Within 10 years of its 1946 launch, a million scooters had been made.

Collecting
How vintage scooters got the market in a buzz 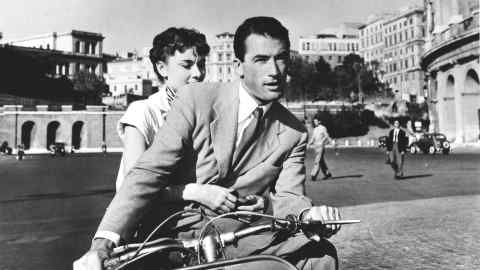 For half a century it prospered. But in 2002 it was more than half a billion euros in debt and posted a loss of €129mn. Unthinkable though it might be today, 20 years ago Piaggio looked like it was going out of business. Around this point, Michele’s father Roberto Colaninno bought the business and within three years Vespa was back from the brink. In 2006, the year Piaggio floated on the Milan stock exchange, production topped 100,000 and, under the headline “Vespa’s Builder Scoots Back to Profitability”, Colaninno Sr told the Wall Street Journal: “Piaggio wasn’t dying. It just needed to be treated better.”

An important part of that better treatment has been to expand not only beyond Italy, but beyond scooters. Vespas were once built under licence in the UK, Spain, France, Belgium and Germany; now Piaggio has manufacturing in Vietnam for the local market, while Boston is the base of Piaggio Fast Forward, which specialises in robotics and has launched a spherical wheelie-bag-like robot. Like Vespa in postwar Italy, Colaninno sees such technology as liberating the user, allowing them to do more.

Italian heritage, while crucial to Vespa’s identity, is not on its own enough to guarantee future survival, and Colaninno is wary of succumbing to the siren song of the nostalgia trap. “Frankly speaking, Italianness is important for us, but if we don’t continue to go beyond Italy, we will lose our power among luxury brands.” With that in mind, Colaninno has been leveraging the brand equity with that favourite tool of the modern lifestyle brand: collaboration. Armani may not have been a huge cultural stretch, but a greater test of the brand’s elasticity came with the Dior collaboration and a Maria Grazia Chiuri-pimped scooter with logo-print seat, top-box and helmet. Now the brand is undertaking the same exercise with a Justin Bieber scooter collaboration, to be launched this spring.

The Bieber makeover itself is unremarkably pleasant: a sort of white-eggshell paint job on which it looks like someone has scribbled some light-blue flames; a seat that appears to have been sculpted from dazzling white Mr Whippy ice cream and the pop star’s vaguely cuneiform signature on the side panel.

“I love Vespa,” says Bieber of the collaboration. “Being able to create something from nothing – whether it’s through art, music, visuals or aesthetics – it’s a part of me. Ultimately, the goal in creating and designing is always to put your own unique spin on things.”

“He is a young guy, giving a good interpretation of the world we are living in through music,” explains Colaninno of Bieber’s relevance. And then, of course, there is the reach. “It is easy to say he reaches hundreds of millions through his social networks and his audience, but I think his music and his lyrics are the right words for the young people of today. When you say that you’re able to collaborate with Dior, Giorgio Armani and Justin Bieber, it means they see something in Vespa that no other brand has.”

Piaggio Group commissioned the global consultancy Interbrand to calculate the financial value of the Vespa brand (as a component of the overall value of the company) and they provided a precise figure of €906mn. According to Manfredi Ricca, global chief strategy officer of Interbrand, the key to understanding Vespa is to think of it as part of your wardrobe rather than part of your garage. Speaking of the Vespa valuation, Ricca says: “When we draw the ratio between the value of the brands and the value of the business, the ratio of Vespa is in a region that is typically observed in fashion and luxury brands. So, from a financial perspective, Vespa is really a fashion brand with two wheels. It’s more in the business of self-expression than it is in mobility, and it produces value in a way that is akin to other fashion brands.”

Of Bieber’s involvement, he says: “It’s an interesting move for the brand. It tries to open up the US market, which is currently relatively small for Vespa with – let’s call Justin Bieber a brand – a big brand that is relevant to a young up-and-coming cohort. So I think it makes sense from a business perspective. And it really says, ‘Look, this is a canvas for creative expression,’ reinforcing the idea that you’re not talking about a vehicle, but you’re talking about an item through which you express yourself.”

I will be paying particular attention to the Justin Bieber YouTube channel (68.2mn Beliebers/subscribers) to see how he will be expressing himself on his.