Q&A with Yahon Chang: ‘My brushwork is inspired by martial arts’

The artist on converting to Christianity, painting blindfolded and running a tea shop in Taipei

Born in 1948 in Taipei, where he still lives and works, the painter Yahon Chang combines classical Chinese inkwash painting with western expressionism. He has exhibited internationally, including at the Venice Biennale, and last year spent time working from a studio in Palermo, Sicily, preparing work for Manifesta 12. His solo exhibition In Situ is at the Taiwan University Public Dormitory in Taipei from January 17-27; a performance will take place on January 18. Chang’s works are also on view at the Ink Now Taipei Art Expo fair with Taihe Art Gallery (January 19-21). This month he will spend a fortnight as artist-in-residence at Outset Contemporary Art Fund in London.

What made you decide to become a painter?
My parents were conservative and unsupportive of me becoming an artist. My family was a scholarly one, and I started Chinese calligraphy at the age of six under the guidance of my father and uncle. I studied design and I ended up going into property development, where I worked on architecture and interior design. An unexpected turn of events led me back to painting; at 41, I suddenly became very ill, losing my balance and becoming dizzy all the time. Whilst abroad recovering, I saw scenery I wanted to capture and started painting again. When I first painted, I didn’t stop for three days and nights. I believe painting was an integral part of my healing — and ever since, almost every day for 30 years, I have maintained a studio practice.

What drew you to traditional Chinese inkwash techniques?
I started with traditional Chinese ink painting techniques and gradually progressed to a more contemporary expression. I tried working with oils and acrylic, but reached a point where they were not as responsive as ink for immediate gestural expression. I found that I could create something more contemporary with the materials I originally used. I studied many Song and Tang Dynasty masters of cursive calligraphy who continue to inspire me. My Chinese ink painting teacher at school, Professor Bo-Luan Liu (1916-2005), influenced me greatly with his brisk and broken brushstroke technique, as well as his philosophical search for noble and virtuous expression in ink painting.

How are you updating these traditional techniques in your work?
I have always tried to reinterpret and challenge the perception of traditional painting. I use Chinese ink painting techniques in a manner that is highly gestural, large in size and often site-specific. I started painting with standard brushes but soon felt the need to create bigger more gestural marks, so [I used] custom-made brushes and rice paper. In the end, the paper couldn’t satisfy my needs either, so I began using linen and cotton sheets to create installations.

As my work became larger, I started to notice that my body became the integral part of my painting and the movement has integrated into the brushwork. This has a link to the martial arts I practised a long time ago: crane-style martial arts and Tai-Chi. My brushwork has [been informed by] martial arts movements for the flow of chi (smoothness out of rigidity; softness with strength) and also ideas born from Chinese literati philosophy into a new contemporary literati expression.

How political is your art?
The main focus in my practice is to investigate humanity, human nature, sentience and the search for higher spirituality; in many ways it stems from the Song Dynasty of literati expression and way of life. My work is foremost poetic and expressive, in search of peace either spiritually or philosophically, rather than overtly political.

You converted from Buddhism to Christianity. Is your faith important to your work as an artist?
Through my Christianity, I learnt to enjoy life more openly. As I sit quietly in my studio, I calm down and my faith fills me; I know what to paint. So in many ways whilst not the subject of my work, faith is important to my process, especially in my quest for higher spirituality.

Sometimes you paint blindfolded: what made you want to do that?
Painting blindfolded is something I have done since my exhibition Poetry of the Flow during Manifesta. It’s not something I do every time, but lately I’ve been exploring it for more liberal expression and total tranquility. It adds spontaneity and feeling as well as heightening my hearing and body movements. For my performance during Taipei Dangdai, I will explore painting with my eyes closed synchronising my movement with selected music.

Do you still own a tea shop in Taipei? Do tea ceremonies have an influence on your work?
Yes, I still have the tea shop. Tea has been a long family tradition; 200-300 years ago, my ancestors grew tea and we’ve treated our guests with the finest tea ever since. The tea shop is a social platform and a place to connect in its own right. There is a close relationship between tea ceremonies, traditional calligraphy, philosophy and Chinese literati culture. I usually prepare my own tea to prepare and meditate myself prior to painting.

What do you plan to make during your residency in London?
Residencies provide an opportunity to experiment and explore alternative ways of working. I try to approach them without too many preconceptions and an element of spontaneity. I’ll immerse myself in the history and energy of London and am interested to see how the Outset’s residency space designed by the spatial practitioners Cooking Sections could influence my thinking. I’ll be creating gestural ink works and painting as performance.

How has the contemporary art scene in Taiwan changed during your career?
Contemporary art in Taiwan only became more prevalent in the 1990s. There was a lack of art schools in Taiwan before the 1960s, and art was only for the privileged who could afford to travel to France or Japan for further art education. Growing up when I did, I saw the domination of an expressionist style of painting influenced by artists educated abroad who later taught at schools here.

Due to the harsh political landscape of the martial law period, subject matters were conservative and confined to everyday life, portraits, landscape and abstraction. In the 1980s, postwar contemporary art began to prevail as society became more open to wider subject matters. In the early 1990s, Hong Kong gallerist and curator Johnson Chang opened Hanart TZ gallery in Taipei and brought in artworks of the 1985 New Wave movement artists from China, which [caused] a huge commotion [in Taiwan’s artistic circles]. I also took part in the group exhibition held by Hanart TZ gallery Taipei in 1996. Contemporary art began to form or sprout at the end of 1980s when martial law ended.

Explore the series
READ MORECollecting: Art in East Asia
Q&A with Yahon Chang: ‘My brushwork is inspired by martial arts’ 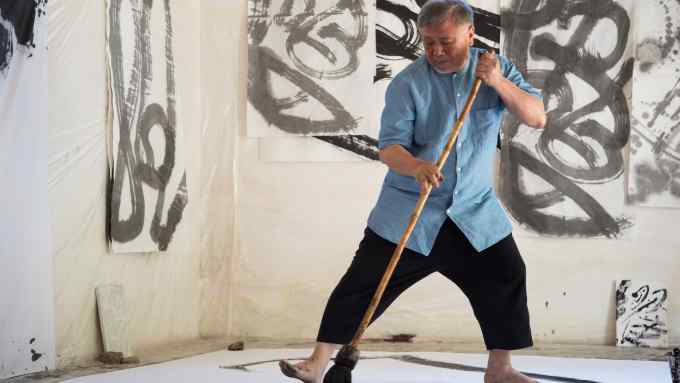