‘It is a long learning process’ — Rudy Tseng’s art collection

The collector, curator and patron on the appeal of buying works by contemporary artists

Rudy Tseng has come to play a defining role in contemporary Asian art. With a background in advertising and the film industry — he retired as head of Walt Disney International, Taiwan, in December 2005 — he is now a collector and respected curator based in Taiwan. He also sits on Tate’s Asia-Pacific Acquisitions Committee and is a member of Tokyo’s Mori Art Museum, as well as of various international art fair advisory groups — from ArtHK and Art Fair Tokyo to the new Taipei Dangdai, which opens next week.

“There is no history of collecting art in my family,” he says cheerfully from his home in a suburb of Taipei. “It was a traditional bourgeois upbringing, but there was not even enough money to pay for the education of all four of us.” At high school and university, his interest was as much in new poetry as it was in contemporary art, although he visited museums and galleries at weekends and devoured artists’ monographs.

While friends were enthralled with cars and fashion brands, he chose to save to buy works of art. His first purchase, made at auction when he was in his early thirties, was a painting by the now New York-based octogenarian Chinese artist Chuang Che, one of the first members of the Fifth Moon Group founded in 1957 and at the forefront of the modern art movement in Taiwan. His art could be said to combine the traditions of Chinese calligraphy and literati painting with western abstraction.

“I was working very hard at the time, and when I travelled it was mostly to Hollywood and I had little opportunity to visit many museums and galleries,” he says. “So my focus remained on local artists and to some extent on Chinese modern painters working overseas.”

That all changed in the mid-1990s when he spent time in London with his old friend the art historian Eugene Tan, now director of the National Gallery Singapore. “He showed me less well-known corners of the city, and he also introduced me to the work of the YBAs (Young British Artists). It was then I realised that I wanted to collect art that related to my life and not work by historic artists.”

He began to buy pieces by the likes of David Batchelor, Ian Davenport and Alexis Harding, and Tan continued to send him “intriguing and inspiring” catalogues from London.

“Eugene Tan changed my viewpoint completely,” Tseng reiterates. “After that I reached out to local artists, then to Japan — it is close by and my parents speak Japanese — and to South East Asia. I picked up a few artists in China, and here and there, in India, the US and even South America. I did not care too much about nationality but rather artwork that had some kind of dialogue with my collection. For example, I bought work by the Mexican Abraham Cruzvillegas — conceptual installation art also made from discarded materials — because his practices are so close to Taiwanese Daoism.”

It is tempting to see Batchelor’s found lightboxes as the critical stepping stone between Tseng’s 17-year career in the film industry and his subsequent focus on video art.

“When I started studying Taiwanese contemporary art, I realised that most of the great artists here work in video and I began to collect it early on, although you cannot display it at home in a conventional way. Taiwan’s industry is great on low-cost computer hardware and software and this affected artistic practice.”

He acquired pieces by the new-media pioneer Yuan Goang-Ming and by Chen Chieh-jen, an artist known for his active social practice.

He continues to pursue what he calls “the difficult route” by collecting ideas in the form of artists’ projects and performance art, as well as collecting physical artworks. Probably his best known is Lee Mingwei’s “The Mending Project”, a cathartic interactive installation that has been touring constantly since its inception post 9/11. Visitors are invited to bring in an item of clothing that needs repair, and sit and talk as the artist or his proxy works on it. Colourful threads drawn from the spools dotted on the wall behind remain linked to the garment folded on the table until the end of the exhibition.

These garments may be treasured by their owners, but discarded elements — trash — remain ever-present in this collection, evident in work featuring anything from out-of-date junk food (Huang Yong Ping) to the gathered stones and shells (Shimabuku’s “Octopus Stone”).

These days, Tseng is most interested in artists from across Asia who are in the inter­national spotlight — not only Lee Mingwei and Charwei Tsai from Taiwan, and the Japanese Shimabuku, but also the Vietnamese-born Danish artist Danh Vo, the Korean Haegue Yang and the Thai video artist Apichatpong Weerasethakul.

“The problem of collecting individual objects is that you tend to see only that specific artwork. Curating shows has helped me understand an artist’s process and development. It is a long learning process, but it has helped me expand my own collection.” Tseng explains how he became a curator by default. At lunch with friends during Art Taipei in 2008, he pointed to the neighbouring table full of visiting Japanese collectors who had nothing to see outside the fair because no satellite events were planned. “My friend told me to curate something for the following year, which I did, and since then I have tried to curate an exhibition every year.

“I am not a big, big collector — I’m more like an art patron. My priority now is supporting the Taiwanese art scene and Taiwanese artists internationally.” 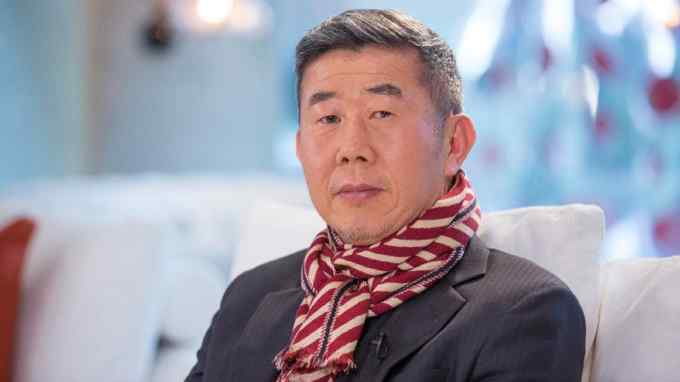