How to tackle climate change: an intergenerational conversation

Unicef brought three young campaigners together with the chair of The Elders leadership group — former Irish president Mary Robinson — for an intergenerational dialogue about climate change:

Mary quoted the Marshall Islands foreign minister, speaking before the 2015 Paris Climate Conference: “Do you want my people to go under . . . to no longer be a sovereign country, to have to migrate to somewhere else?” He led a coalition to get the important 1.5C limit on temperature increase into the Paris text.

She noted that the Intergovernmental Panel on Climate Change 2018 special report highlighted the huge difference between 1.5C and 2C of warming. It said the whole world needs to stay at 1.5C or less — and, to do so, we have to reduce our emissions by 45 per cent by 2030.

Mary said that young climate activists have made it impossible to ignore their voices. She pointed out that the German constitutional court said Germany is not protecting the intergenerational rights of young people — and she added: “We need clarity and directness from young people. It’s not fair to put a burden on you, but your voice is clear and science-based, and it’s really important.”

The young people spoke about their feelings of “climate anxiety”.

Isabelle said: “It’s like a dark looming cloud over our future.” Nkosi felt similarly. “I’ve been feeling the pinch of climate change, seeing it in my own environment,” he explained. “These things affect my life every day and that is what’s driving my advocacy. It stresses me a lot, imagining what will the environment be if we don’t act today.”

Priyanka added: “There’s definitely the emotion of climate change dwelling on the minds of young people but, more than anxiety, I feel eagerness to make the change. It’s up to me, it’s up to the young people. It’s our time to shine, to step up. We feel stronger together because we support each other to fight climate change.”

It stresses me a lot, imagining what will the environment be if we don’t act today

Mary talked about how important it is also to have grassroots women, indigenous women, and young women at the table. “The moral voice of those frontline workers is very compelling,” she said.

Priyanka spoke movingly about her experience of the damage caused by floods on her island: “It’s heartbreaking,” she said.

Isabelle saw air pollution as a key issue. She highlighted the recent legal case in which air pollution was ruled as a cause of death of a nine-year-old child, Ella Kissi-Debrah, in London.

Mary expanded on this theme of air pollution, which has been linked to more than 6.5m deaths globally, every year.

Nkosi said he started an environmental club at his school and has focused on the importance of clean energy. He pointed out that clean energy is safer for women and girls because they don’t need to go to the bush to collect firewood.

Mary highlighted four lessons we can learn from the Covid pandemic and apply in the fight against climate change: that collective human behaviour can make a difference; that leadership matters; that science matters; and that compassion is important.

45% Reduction in greenhouse gas emissions needed by 2030 to limit temperature change to 1.5C

For Isabelle, Covid has shown how connected we are globally. But she thought our sense of compassion has not extended sufficiently, in Covid or climate, to those in other parts of the world. “We’re not really thinking globally, and we need to,” she said. There has not been enough compassion and empathy for those suffering most because of the climate crisis, Isabelle added.

Priyanka agreed: “We need inclusion: we’re all facing this climate crisis and we must work together to create solutions.”

Isabelle said climate change can inspire us to think about the benefits of innovation and change. Nkosi spoke about reimagining a future that is more sustainable. Priyanka said: “As young people, we need to step up and take action now, living sustainably and moving towards a circular economy.”

Mary argued that people often fear that acting on climate change means they will lose something — but we can actually gain so much.

A call to action

Nkosi concluded: “I’m only satisfied if there is a young person in every big meeting. Young people are the world’s most precious natural resource. Involve us — you’ll be getting new ideas”.

Isabelle called on governments “to listen to young people, particularly on climate change . . . we can change this throwaway culture; shop more sustainably; use our voices to push industry to do better.”

For Mary, when we talk about the post-pandemic world, instead of talking about “building back better”, we should “build forward with justice, equality and sustainability”.

Priyanka said: “Young people need to demand changes in the way we manufacture, consume, commute, communicate, and live our lives. We need to protect and preserve our planet.”

Mary Robinson was the first woman president of Ireland, serving from 1990 to 1997, and was UN High Commissioner for Human Rights from 1997 to 2002.

Nkosi is a Unicef Youth Climate Advocate from Zimbabwe.

Priyanka is a Unicef Youth Advocate for the Eastern Caribbean Area, from Trinidad and Tobago.

Isabelle is from the UK’s West Midlands and has several years’ experience as an adviser to non-governmental organisations, including the Youth Advisory Board of Unicef UK.

Read their full conversation on the Unicef website, here 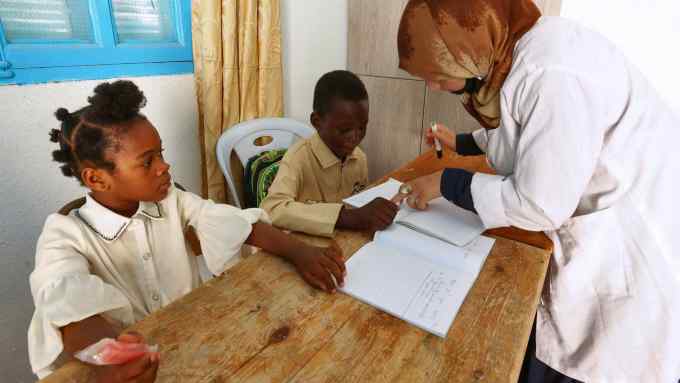