Teresita Fernández: the Miami-born artist taking her hometown by storm

Teresita Fernández’s studio has the impersonal, sleek facade of a luxury bunker, a place super-rich people might store cars, or art. Inside, it is divided into two storeys: a clean floor and a dirty floor. The clean one has plants, filing cabinets, and a pristine paper model of a gallery, complete with tiny paper versions of her artworks. The dirty floor, sooty and charcoal-specked, looks like the site of a recent fire, or of a piece of successful sorcery.

Our interview takes place on the clean floor. Fernández, 51, both guarded and glamorous in sneakers and a puffy vest, has a quiet, monotone intensity.

The creator of massive, textured works of art that incorporate gold, graphite, charcoal and other natural materials, she sees her works partly as conceptual Trojan horses: beauty is “one of the most powerful ways that we have to talk about justice, for example”, she says.

I have come from her Manhattan gallery, Lehmann Maupin, where panels from her “Dark Earth” series have just been installed: layered charcoal landscapes veined with gold evoke rivers and mountains. The gold should remind viewers, she says, of wealth plundered from the Americas by Europeans.

It also has another function. Like many, if not most, of her works, it reflects viewers back at themselves. That is another trick: “People are very seduced by their own image,” she says.

“I’m trying to hold your attention, to get you to care about something where you see yourself but it’s not about you,” she continues. “That moment of egolessness is what happens when you see something beautiful, like when you’re in front of some amazing mountain and you just” — she mimes astonishment. “You become small. You disappear. It’s not about you, and yet it is about you.”

A 2005 MacArthur “Genius” Grant winner and a one-time member of President Obama’s Commission of Fine Arts, Fernández was born in 1968 in Miami to parents who had fled the Castro regime in Cuba. She has lived in New York for two decades, but her work is as flourishing in her hometown as elsewhere. She appears on Lehmann Maupin’s stand at Art Basel Miami Beach next week, and is the subject of an enormous mid-career retrospective at the Pérez Art Museum (PAMM).

The PAMM show, called Elemental, would have been unimaginable when she was growing up, not least because there would have been no place to exhibit it. “That’s hard for people to understand now, because in a very short amount of time Miami has become this international art destination, at least seasonally.”

It would also have been hard to imagine because of the chronic (and continuing) underrepresentation of Latinas in art. “This one’s for all the little girls in Miami who are immigrant, brown, black, Latinx, first-generation, speak with accents and say jello instead of yellow, are called spic, are told to speak English or to go back to wherever . . . ” she wrote on Instagram before her show opened.

“There was a lot of name calling” when she was growing up in Miami, she says. “My parents were treated really badly. I was treated badly. We didn’t belong; we were always aware of not belonging. But it was a whole city of people like that, that didn’t belong. And so there were Haitians and Bahamians and African Americans who were treated even worse than we were.”

So there is another sense in which Fernández hopes her art is reflective. “There’s something really satisfying about imagining that there could be a lot of little girls like me visiting the museum and imagining themselves actually being the person who makes the work.”

The show features many of her most recognisable works: “Fire”, from 2005, an eight-foot sculpture made of hanging silk threads, her intense, visceral charcoal maps, and sculptures and installations made from the raw material of the planet: rocks, gems, wood. Because they are both immense and detailed, her works are incontrovertibly in-person experiences. Photographs generally capture either their intricacy or their monumentality, but not both.

Fernández’s biggest public installation to date was 2015’s “Fata Morgana”, a mirrored corridor in Madison Square Park. A fata morgana is a type of mirage, and the work created a dappled, reflective, disorienting space in the middle of the city.

She says she wanted the work to highlight the things we don’t see, and “who gets to use public space, who’s visible in public space”. She developed programming for the passageway, including a bilingual poetry reading and a Dia de Los Reyes (Epiphany) celebration she hoped would involve the less visible public, such as the Latin American immigrants staffing the restaurants around the park.

“It’s not like I make this thing and they put it in the public [realm], and then somebody else gets to determine its meaning,” she says. “It’s cared for throughout, and that’s a big part of the conceptual part of my practice.”

Fernández talks often about the alchemical interaction between viewer and art. “If I can get the viewer to care about something through details or something very beautiful or lush or captivating, then I can take you to the next step, which is: this is actually about something. This is the social and political part of it.”

The way I’mexploring the personal narrative, or current events and politics, is through the work

I want to know more about this next step, and begin to ask what happens after you force people outside of themselves. But this is wrong: she cuts me off, unhappy with the word “force”.

“Actually, I would just stop you right there and say that’s not true.” You can’t just force them, she insists. “We have been bombarded with images all day long. And so to get somebody to stop and actually slow down is, for me, a very difficult thing to do. And that’s a lot of the work right there.”

Fair enough. After some time, I try again, but Fernández is wary of being compressed into a single set of ideas, whether biographical or ideological. 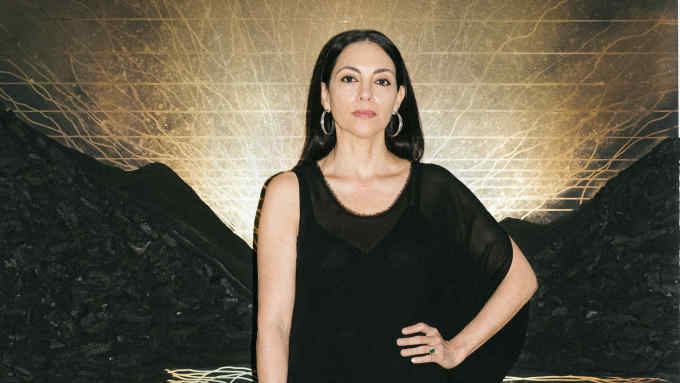