BlackRock and Vanguard face heavy burden of US sanctions on China

BlackRock and Vanguard face having to offload billions of dollars worth of investments in order to comply with the US government’s decision to blacklist Chinese companies with military connections.

The order, which came into effect on Monday, has forced index providers, including MSCI, FTSE Russell, S&P Dow Jones Indices and JPMorgan, to announce the removal of several Chinese companies from their indices.

The world’s two largest passive fund managers are particularly affected because of the amount of money they manage in funds tracking those indices.

The Vanguard Total International Stock Index Fund, which tracks more than 7,000 stocks in its composite of MSCI and FTSE indices and had $407.1bn in assets at the end of November, is one of the largest fund allocators to four of the blacklisted firms.

The US-listed Vanguard FTSE Emerging Markets ETF/Index Fund, which has $71.69bn in assets as of January 6, had an exposure of more than 43 per cent to the Chinese market.

Vanguard did not respond to questions on its strategy and timing for offloading relevant blacklisted Chinese securities from its funds.

“Since the executive order was first announced, we’ve been keeping our client-facing associates prepared with a response for enquiries on the topic. In short, Vanguard will fully comply with the executive order and will continue to monitor the situation to ensure ongoing compliance,” it said in a statement to Ignites Asia.

BlackRock’s US-listed iShares Core MSCI Emerging Markets ETF, which had about $70bn in assets, also has an exposure of 36 per cent to the Chinese market.

The fund had a 1 per cent, or estimated $700m, exposure to the blacklisted Chinese securities before the changes announced by its index, according to calculations from Morningstar data.

BlackRock also declined to answer Ignites Asia queries regarding the company’s strategy and timing for offloading blacklisted Chinese securities from its funds, but sent a statement saying: “BlackRock is monitoring index providers and studying the guidelines issued by US regulators. We are taking all necessary actions to follow benchmarks accordingly, and to ensure compliance with applicable laws and regulations.”

A Morningstar report shows 11 BlackRock iShares ETFs, and two Vanguard ETF and index funds with assets totalling billions of dollars, all have significant exposure to the sanctioned Chinese securities.

Jackie Choy, Hong Kong-based director of ETF research at Morningstar, said that while index providers routinely conducted rebalancing to comply with index adjustments, the recent removal of blacklisted Chinese companies had increased pressure on ETF providers and given them a much shorter timeframe for decision-making and execution than normal.

Mr Choy said that if ETF managers did not drop the blacklisted firms after their respective indices’ moves, they risked tracking errors regardless of any potential legal consequences that could arise.

Even if managers decided to hold on to some of these Chinese companies’ shares — which they are entitled to do, because the executive order only specifically bans buying more shares after January 11 — managers risk losing investors, especially US ones, because they will not be able to buy more shares of the fund.

However, most global asset managers have yet to make public announcements about their exact ETF or index fund readjustments.

Krane Fund Advisors, a New York-based, China-focused ETF provider, announced on the first day of the year that of its six ETFs with exposure to the blacklisted securities, four will have sold their positions in the companies by January 11, while the other two would liquidate securities before January 5 to optimise portfolios.

Mr Choy noted that the removals had affected almost all China-related and even emerging market indices across all major index providers, and it was nearly impossible to determine the number of total products and issuers that will be affected.

A senior executive for one overseas index provider based in Hong Kong said ETF managers would have to exit the holdings in good time to make sure there were sufficient market makers to trade the shares.

The US Department of the Treasury has said the Office of Foreign Assets Control “will continue to update” its list of sanctioned Chinese firms.

Some asset managers believe that even though President Donald Trump instigated the original sanctions against Chinese companies, the incoming Biden administration will continue with the same approach.

“If anything, trade and investment may actually become more challenging as the new US president is going to be much more willing to co-ordinate policy with Europe and other major trading partners. Attitudes within Europe towards China have similarly become more negative,” said Brian Bandsma, New York-based emerging markets and Asia-Pacific equities portfolio manager for Vontobel Asset Management. 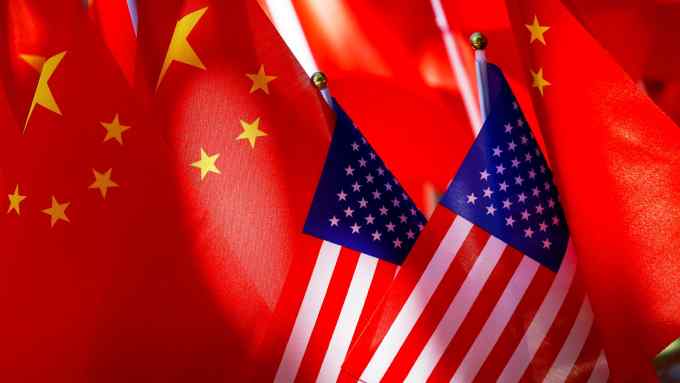