How I Spend It: author turned apothecary Maggie O’Farrell shares the stories of her home-grown herbal potions

Here’s a confession: I often carry a knife.

I bought it years ago at a French flea market. It has a pleasing birch handle which sits snug against the palm; once the safety catch is disengaged, a slender steel blade can be levered out of this wood.

It accompanies me up hills, along rivers, through woodland. If I spot something of interest, I unzip my pocket and pull out my knife. So much to tempt, so much to stash in my scavenging bag: the frothy scented lace on elder trees in late spring or their heavy berries in autumn; the scarlet hips that swell behind the sepals of wild roses; dark green ragged-edged nettles; the slender, pliable needles from a Scots pine; the serrated leaves of wild raspberries; bright clusters of rowan fruit.

Like all obsessions, this one began innocently enough, with the acquisition of a small aloe vera. I was, at the time, trying to find something that would ease my child’s chronic eczema, as nothing the doctors prescribed was helping. One desperate day, I slit open a leaf and dabbed its greenish ooze on to a tiny patch of my daughter’s inflamed, reddened skin.

By bedtime, that patch was paler, smoother. I cut open a second leaf. By morning, the area was clear.

It was as if storm clouds had parted to let through a narrow ladder of light. I drove around plant shops and garden centres, determinedly purchasing aloes. Around this time, I was writing Hamnet, a novel about Shakespeare’s only son. Because there are numerous and informed references to plant lore in his plays, I was reading, as research, an Elizabethan book of herbal cures. It stated that calendula-infused oil was beneficial to the skin.

Before long I was propagating calendula seedlings on my windowsills, ordering hemp oil on the internet, and putting Kilner jars of potions to steep on radiators. I found some wild chamomile on a grassy knoll and, recalling that I’d read about their digestive properties, gathered up some blooms. Infusion number two.

One thing led to another, and before long I’d booked myself on to an evening course in herbal preparations. Purely as research, I told myself. In order to write accurately about the life of women in the 16th century, I needed to know exactly how comfrey would have been used to ease stiff joints, didn’t I? There’s only so much you can learn from reading words in a book: sometimes you also have to get your hands dirty.

And this I did. Stripping elder-berries from their stalks and mashing them down into alcohol so that they surrender up their vitamin-rich juices is, I discovered, a gloriously messy procedure. My palms, wrists and fingernails were stained purple for days; my sleeves and apron-front have never recovered.

There is a deep, atavistic pleasure in such gathering and making. Growing plants and storing up their produce is an ancient act of hope, a promise to yourself and others that you’ll still be around to reap the benefits.

It’s probably easy to guess the path of this trajectory so I’ll cut to the chase. I now have a floor-to-ceiling cupboard in my study that is currently filled with the following: a large glass jar of ink-dark elderberry tincture, a vial of rose elixir, several bottles of rosehip syrup, a steeping infusion of arnica, a fiery yellow ginger and pine oxymel. The door, when open, emits the vying fragrances of dried rosemary, eyebright, hyssop, sage, lavender and witch hazel. There are a group of clean vacuum jars, lids yawning wide, awaiting their next use, pots of balm base, a bag of home-made lip salve, vats of eczema cream, ochre hunks of beeswax, given to me by a Kefalonian beekeeper, that give off a faint whiff of wild thyme.

If we move outside, you will observe, to the left of the patio, an Elizabethan-style physic garden, planted as research for Hamnet. Here, you will find borage, angelica, sage, thyme, valerian, comfrey, skullcap and rosemary. Medicinal plants have also colonised other parts of the garden. You might be able to pick out the conical brown anthers of echinacea, the blush-tinged and late-blooming dog roses, the purple lances of lavender, the sunburst faces of marigolds, a thick fleece of chamomile, the cheering green spears of mint.

I should state that I am not one of those people who is suspicious or averse to conventional medicine; I’m ever grateful for penicillin and I’m happy to state that all my children are vaccinated. What I do believe is this: that there are some ailments that somehow slip through the cracks of medical wisdom, and that plants can wield a mysterious power to both heal and harm. And perhaps that you should always carry a penknife while out and about, because you never know what you might find.

Maggie O’Farrell’s Hamnet is published by Tinder Press at £20; her children’s book Where the Snow Angels Go by Walker books at £14.99

How To Spend It
How I Spend It: Clarissa Ward on face creams and the frontline 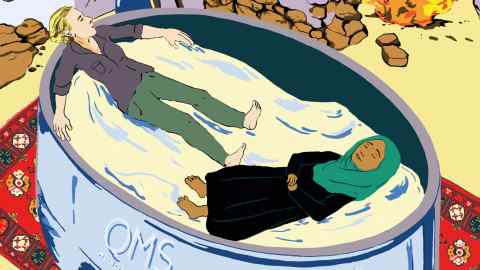