The writer is a senior associate at an international law firm. These are personal views based on her experiences and those of peers.

To address the lack of ethnic diversity in the legal industry, it is not enough to focus only on recruitment. We also need to ensure that ethnic minority lawyers are being retained or promoted by their firms. Lack of access is one part of problem, but the bigger challenge is retention. We need to be honest about why the culture in many firms is not inclusive.

I am a proud member of the first corporate law scheme run by the non-profit body Sponsors for Educational Opportunity London. It was instrumental in helping me obtain a training contract in my second year of university.

When I joined SEO London in 2008, I made a commitment to help other ethnic minority students gain access to the legal industry. I have designed and participated in many programmes focused on providing information, mentorship and application support for people of colour.

But I have become uncomfortable at encouraging people of colour to enter a professional environment that, despite actively recruiting these candidates, is not doing enough to help them build longstanding careers.

In the UK Law Society’s 2020 Race for Inclusion report, ethnic minority lawyers reported lower levels of workplace wellbeing compared with their white counterparts, which has led to many taking a break from the profession.

After seeing several of my black colleagues leave the law, it became clear to me that focusing on graduate recruitment alone to improve diversity in law firms was equivalent to filling up a bucket with holes in it.

A law firm increasing its intake of “diverse” trainees is not evidence that a law firm is inclusive. If anything, these schemes are simply sending more ethnic minority trainees into an unwelcoming culture.

As a black woman who has practised in more than one firm in the City of London, I see a clear disconnect between management and teams about the importance of diversity. There is often no clear guidance on what changes firms need to make at a department level.

Interest in programmes such as reverse mentoring and unconscious bias training, and support for employee-led networks, seems to wane once we get down to a team level.

It is extremely difficult for individuals to raise concerns about microaggressions, tokenism or favouritism, particularly in situations where there are no other senior lawyers — whom they trust — to step in to help.

Raising a discrimination concern can be career-limiting or worse, career-ending — especially if concerns involve a high-performing fee earner. 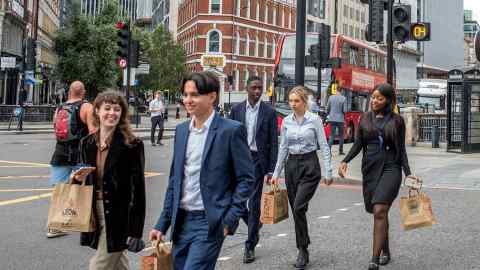 Law firms have a responsibility to establish safe, confidential processes to allow instances of discrimination to be handled without fear of isolation or retaliation. And department leaders should be held to account if ethnic minority lawyers in their teams keep leaving to go in-house, or to other firms, or into other industries. Firms must do more to understand the experiences of ethnic minority lawyers and to recognise the barriers holding them back.

The Law Society report states that, between 2015 and 2020, some 42 per cent of white males who became partners stayed in the same firm, but only 20 per cent of ethnic minority males were promoted internally.

I have served on many hiring panels in my career and have seen black applicants not progressed because they were not deemed a “good fit”, even with the right qualifications, while some white male applicants, similarly qualified, made it through as they were seen as a “good fit”.

In an environment where your progression relies on the allocation of good work and internal relationships, it is crucial that law firms educate their workforces about racial discrimination and microaggressions and ensure work is allocated fairly.

While participating in diversity initiatives and paying consultants to facilitate them can be helpful, involving associates from diverse backgrounds in the conception of these schemes would make the exercise more effective. The success of these initiatives should be regularly assessed.

In 2014, the Black Solicitors Network set up Creating Pathways, a programme providing soft skill workshops and cross-firm mentoring between junior and senior ethnic minority lawyers. The support I received from other senior black lawyers through this scheme is one of the main reasons I was able to continue practising when I lacked support in the team I was in.

The programme’s success is down to the fact that it is run by senior black lawyers. However, schemes such as this teach us only how to cope; law firms should ask themselves why they are still necessary.

As clients grow more specific in demands for diverse counsel, this conversation will continue. Firms must reflect on the culture of their departments and design strategies to support and retain ethnic minority lawyers. Success will depend on tracking progress and holding leaders to account.