Wild popularity of GameStop and AMC leads to ETF distortion

Popular meme stocks GameStop and AMC Entertainment may not seem like the most obvious “value” stocks after the recent surge in their share prices.

The lossmaking video game retailer trades at 35.2 times book value, 10 times its industry median, and at an enterprise value of 381 times forward underlying earnings, 51 times that of its typical peer. Cinema chain AMC’s underlying earnings are forecast to be negative even in the coming 12 months, rendering its financial ratios even harder to perceive as “value”.

Yet the two companies are the largest two holdings in BlackRock’s $17.5bn iShares Russell 2000 Value exchange traded fund (IWN) with a combined weight of 2.1 per cent, despite the ETF holding 1,495 companies.

BlackRock said IWN was still achieving its objective, trading on a price/book ratio of 1.73 times, compared to 2.55 for the broader Russell 2000 index.

But IWN is far from alone. GameStop accounts for 13.8 per cent of the First Trust Nasdaq Retail ETF (FTXD).

Over at Invesco, the S&P SmallCap Value with Momentum ETF (XSVM), has an 8.8 per cent weighting to GameStop, well ahead of the 3.8 per cent of its next largest position.

None of these examples are perhaps as egregious as that of State Street Global Advisors’ SPDR S&P Retail ETF (XRT), which in January managed to have 19.9 per cent of its assets in GameStop, comfortably ahead of the combined 11.8 per cent weighting of the rest of its top 10 holdings – despite it professing to be an equal-weighted fund.

They do, though, raise an important issue. While investors in these ETFs have so far benefited from the meme stock rally, the data show the potential for ETFs to drift from their moorings and develop perhaps unexpected exposures in the months between their periodic rebalances.

The outsize exposures also leave funds vulnerable to losses when meme stocks’ rallies end. Such fears undoubtedly played a part in XRT’s assets tumbling from $700m to $200m in one day in January when investors dumped the ETF after its exposure to GameStop surged.

Like most ETFs, the funds are passive index vehicles, with no option but to allow a stock to account for an ever-larger share of their portfolio, pending the next scheduled rebalancing date.

“They have to follow the rule book and rebalance on a set schedule,” said Todd Rosenbluth, head of ETF and mutual fund research at CFRA Research, who noted that another Invesco ETF, the $1.7bn Dynamic Leisure and Entertainment (PEJ), saw its exposure to AMC surge from 3 per cent in February to 18 per cent in early June, whereupon its quarterly rebalancing saw it sell the entire stake, as AMC’s value metrics had deteriorated to such an extent that it no longer met the criteria for inclusion.

“There is risk, because it can be some time before an ETF gets rebalanced. Investors can get hurt if they don’t look at what is in the portfolio before they buy,” Rosenbluth added.

He believed the current market dynamics were increasing the tendency for ETFs’ portfolios to become distorted.

“We have seen quite a lot of dispersion in stock performance this year. There is a wide range of winners and some losers. When that happens, you will find companies can very quickly dominate a portfolio,” Rosenbluth said.

“There are some forces in the market which are unusual — the forces that are driving up GameStop and AMC,” Lamont said. “Ultimately passive is just reflecting what is out there,” he added.

Nick Kalivas, head factor strategist at Invesco, argued that the meme stock phenomenon actually “plays into the hands” of factor-based “smart beta” funds such as XSVM, XSMO and PEJ, in that it was a way of “getting exposure to stocks that are going up”.

Then, when a rebalancing date arrives — twice a year for XSVM and XSMO — “there is a mechanism to reduce exposure to stocks that have gone up. There is a tendency to buy low, sell high.”

If investors are concerned by the meme stock effect, one option would be for ETFs to rebalance more often. However, this would increase turnover and trading costs.

“That is why we don’t see daily rebalancing. It’s impractical. Quarterly rebalancing is already quite frequent. I don’t think many would choose to go monthly,” said Lamont.

Kalivas said rebalancing frequency had “come up in a lot of our client conversations around factor ETFs”, but that index provider S&P felt “that the periods chosen are the best periods in terms of harvesting the factors and minimising trading costs”.

Another option would be to have rules in place that cap the weight of any individual stock. Some ETFs have caps, but they tend to be set at quite high levels. PSCD, for instance, has a 22.5 per cent cap for a single name.

An alternative might be to have a “break the glass in case of emergency” rule in place that allows a fund to rebalance early in specific circumstances, Rosenbluth said, as was the case with the iShares Momentum ETF (MTUM), which was rebalanced early at one point last year due to high volatility.

Barring that the only solution might be for investors to be vigilant.

“It’s a lesson to the investor to know the methodology,” Kalivas said. “Remember it’s rules based, so when it goes wrong there is no human being in there to put it right.” 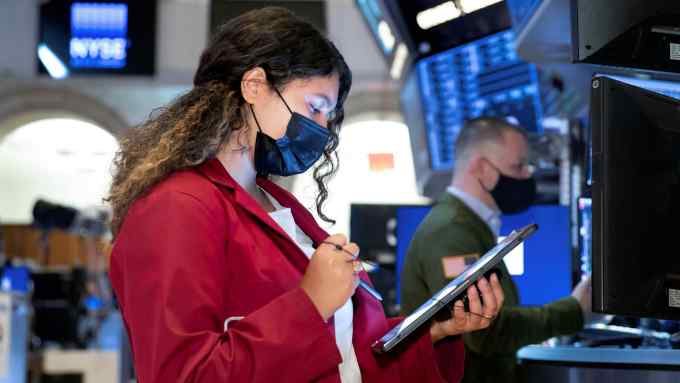