From Spain and Sweden to Mexico and Malaysia

Mexico has a couple of alluring new addresses to note. Chablé, the wellness resort that opened in 2018 on the Yucatán, has taken over the old Hotel Mukan on a private barrier island in the south of Tulum in the Sian Ka’an biosphere reserve. The 12 acres are now home to Casa Chablé and its 10 very plush accommodations: five private villas, and five suites in the main building. Space, nature and wellness are the luxury things here: the open yoga-fitness-meditation pavilion abuts a 200m private beach.

Meanwhile, in the colonial city of San Miguel de Allende, the team that gave Mexico City the petite and extremely charming Hotel La Valise has created a sibling property. Behind its beige façade, La Valise San Miguel de Allende has just six suites surrounding a courtyard garden made delightful with a pool and Jacuzzi, and carved stone walls reminiscent of both Aztec temples and Rajasthani stepwells. As in the capital, the interiors here are gorgeous, showcasing Mexican design and craftsmanship from the 18th century to our own, with a scattering of collectable mid-20th-century pieces the stars of the show. From $600, chablehotels.com; from $342, lavalisesma.com

A stylish “home” upgrade in Stockholm

Since it opened in 2012, a little hotel called Ett Hem has been the Stockholm address for design aficionados who can appreciate its many and varied home-away-from-home charms (if your home was designed by Ilse Crawford, that is). Owner Jeanette Mix has a sixth sense for mixing indulgences and simple pleasures (of which the breakfast is a good example – serve-yourself, laid out on a kitchen bench, but just look at those homemade mueslis and jams).

This month, Ett Hem is expanding down the street into two townhouses – Nos 4 and 6 – adjacent to the hotel’s original No 2. No 4 will feature a larger kitchen where longer meals will be prepared and served (with the chefs and guests foraging in the gardens and greenhouse), as well as a big second-floor drawing room and 10 individually designed rooms and suites in which Crawford has done more of her exquisite old-new Crawford thing. No 6, which opens later this year, will instead hold three residences available for long-term use, as well as a gym. From €490, etthem.se

Head for the AndalucÍan hills

Once upon a gilded 1980s time, the Byblos hotel in the Andalucían pueblo blanco of Mijas was the haunt of the great, good and notorious, from Mick Jagger to Antonio Banderas to sundry British and Saudi royals. It closed in 2010 but, after a recent private-equity acquisition and a comprehensive style and operations makeover, it has relaunched as La Zambra, a 197-room resort that reads like a small fortified city.

Fittingly, both city and country pleasures are on offer, from the three pools to the Pilates studio and tennis and paddle courts, and a spa with a Turkish sauna and whirlpool circuit. Eating and drinking experiences will range from a poolside chiringuito barbecue joint to plant-based menus. The only thing not on offer, it seems, is the old Byblos gilding: the renovation has scrapped every last vestige of ’80s opulence in favour of terracotta, polished concrete, unfinished wood and natural-fibre textiles, with not a tassel in sight. lazambrahotel.com, from £500

A modern makeover in Malaysia

Kuala Lumpur is big and unwieldy and, while not without its charms, a city you’d not really think to find a hotel like Else in. And yet Malaysia’s capital is where co-founders Justin Chen and Javier Perez decided to launch their all-new, all-local hospitality brand. Taking up the whole of the heritage Lee Rubber building in KL’s Chinatown, Else’s 49 rooms and suites keep prewar bones intact and layer in all sorts of plush finishes and tech finery.

They share the site’s 56,000sq m with two restaurants, a variety of wellness and fitness rooms and spaces (from flotation pods in the gym to a salt-water infinity lap pool) and common areas filled with original works by Malaysian artists, and antiques, prints and collectables sourced from, among other suppliers, Gilded Lion, which is one of the more enchanting antiques and collectables warehouses in south-east Asia. From about £108, elseretreats.com 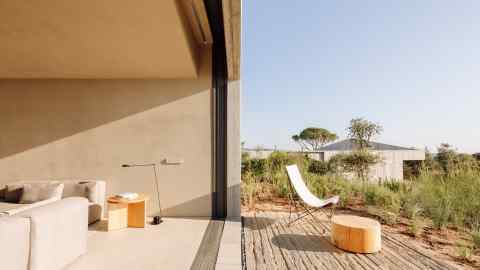