US Treasuries, gold, oil and gas and commodities funds are among those that have attracted the most inflows

Bank sector exchange traded funds have borne the brunt of investor selling since Russian tanks rolled into Ukraine in late February, as money instead flowed into the relative safety of gold and US Treasury funds.

Morningstar data show six specialist financial sector funds are among the 20 ETFs to have seen the largest net outflows globally since the start of the Ukraine crisis.

State Street Global Advisors’ US-listed Financial Select Sector SPDR Fund (XLF) has seen the largest outflows of any ETF in dollar terms since the start of the invasion, among funds that report daily data, according to Morningstar, with investors whipping out $2.4bn, helping push its assets down to $42.2bn.

Some European bank ETFs have been hit far worse in proportional terms, however.

“At the beginning of the year there were high expectations that the Federal Reserve would be raising interest rates significantly in 2022 and beyond. Rising oil prices related to the Russian invasion of Ukraine have made investors less confident in how aggressive the Fed will be,” said Todd Rosenbluth, head of research at ETF Trends.

Given that higher rates are “a catalyst for earnings growth at banks and other financial institutions,” it is unsurprising that investors have cut exposure to the sector, Rosenbluth added.

In contrast, the top 20 in terms of inflows includes two ETFs holding physical gold, one focused on the shares of gold miners, another featuring oil and gas production companies and one holding a broad basket of commodities.

There are also six fixed income ETFs in the top 20 of Morningstar’s data, three focused on US Treasury bonds and others holding investment-grade corporate bonds, inflation-protected securities and US municipal bonds — despite 10-year Treasury yields rising to their highest level since May 2019 on the back of spiralling inflation.

Investors’ cash has also been flooding into gold ETPs as the price of the metal neared all-time highs.

The iShares Physical Gold ETC (IGLN) has seen the largest inflow of any fund in dollar terms, of $2.4bn, as it assets have risen to $16.4bn, up more than a quarter from the end of January.

Sector heavyweight the SPDR Gold Shares (GLD) saw $2.2bn of buying, taking assets to $67.7bn, a rise of more than $10bn this year and the highest level since January 2021, when Covid was investors’ chief concern. Invesco’s Physical Gold ETC (SGLD) accounted for another $1bn of inflows.

Kenneth Lamont, senior fund analyst for passive strategies at Morningstar, said gold was seen as a “safe haven”, particularly given the “tail risk” of further escalation of the conflict, either in military terms or the economic spillover effect of sanctions.

“It’s a safe haven store of value that traditionally goes up in times of crisis, but it’s also seen as an inflation hedge,” Lamont added.

US Treasury bond funds have been the other big winner. Topping the list was the iShares 7-10 Year Treasury Bond ETF (IEF), with $2.1bn of inflows, although new investors will currently be sitting on losses as the jump in Treasury yields means IEF has fallen 3.5 per cent since March 4.

Other investors have instead migrated to the durational extremities of the Treasury universe, with both iShares’ 20+ Year Treasury Bond ETF (TLT) and Short Treasury Bond ETF (SHV) seeing inflows of $1.3bn. Newbies in the latter are currently faring better, with SHV holding steady, even as TLT is down 6.2 per cent from early March.

Turning to corporate bonds has been no panacea, with the iShares iBoxx $ Investment Grade Corporate Bond ETF (LQD) enjoying inflows of $1.2bn even as its shares have fallen 4.5 per cent so far this month.

Lamont said the concentration of fixed income ETF inflows into the US market was suggestive of investors believing America will be less impacted by the crisis than Europe.

As many institutional investors cannot invest in gold, fixed income might be “the best of a bad bunch at the moment” for them, he added,

Investors that pumped $1.2bn into the SPDR S&P Oil & Gas Exploration & Production ETF (XOP) have fared better so far, with shares up 8.2 per cent since the start of the invasion. XOP’s market capitalisation is now $6bn, a fivefold increase from the depths it reached at the nadir of the oil price crash in March 2020.

Those who managed to buy into the Teucrium Wheat ETP (WEAT) before it ran out of shares may be toasting their success most of all however. Inflows of $235mn dwarfed the fund’s market cap of $125mn as of February 24, a period during which the share price has risen 21 per cent. 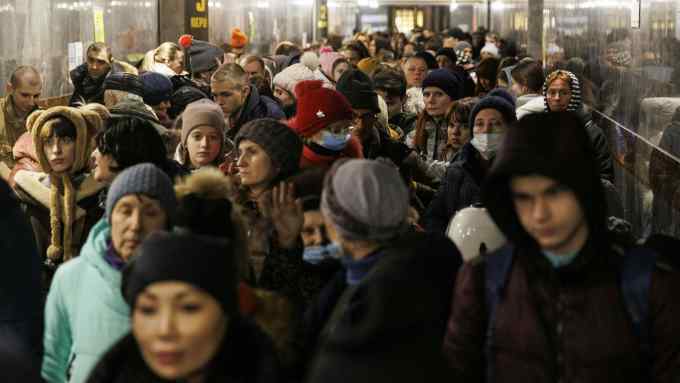