Inclusion will improve if senior managers ‘walk the talk’

Protests have brought race to the fore this year, while the latest FT Diversity Leaders ranking shows women still only fill one in four top roles

Biocoop has come top in the second annual ranking of European employers for diversity and inclusion efforts run by the Financial Times and research partner Statista.

The French co-operative of organic grocers beat Infineon, the German semiconductor group, at number two. They were followed in third place by last year’s number one, Booking.com, the Dutch-headquartered travel site. The Diversity Leaders ranking is based on surveys of employees and recruitment professionals conducted between April and August this year.

Unlike most listings, the FT-Statista partnership examines inclusion holistically, rather than focusing on a particular category, such as gender, ethnicity or age.

Highest-ranked companies generally do well all round, but also receive outstanding marks for particular aspects, as Biocoop did for gender and disability, and Infineon for disability and LGBTQ+. Booking.com received particularly high marks for LGBTQ+, disability and gender.

Companies that have scored especially well tend to have a history of focusing on diversity and expect their managers to work on inclusion. “We started early, in 2007, with a dedicated function. It is not an HR topic. It matters for our business,” says Markus Fink, Infineon’s global head of human resources.

That is not surprising, says Gill Whitty-Collins, a consultant and the author of Why Men Win at Work.

“The first thing you have to do with everyone is to get them to understand the business benefits of diversity, how if we had a more diverse group we would be delivering better results,” she says.

“People are very commercial. Once they understand that we are not doing this to be nice but to better our business, they buy in.”

To broaden participation for this year’s survey, responses were sought from more than 100,000 workers at close to 15,000 companies across 16 countries, up from 70,000 workers in 10 countries last year.

Everyone was asked generally about their employer’s commitment to diversity, and subsequent questions explored age, gender, ethnicity, disability, sexual orientation (LGBTQ+) and fairness. Survey participants were also given the opportunity to rate other sizeable companies in their sector.

Answers from minority groups and others targeted specifically by diversity policies were weighted more heavily — predictably, the scores they gave tended to be lower. Men, for example, were much more likely than women to be satisfied with their company’s handling of gender diversity.

Chuck Stephens, global head of inclusion, diversity and belonging at Booking.com, says inclusion requires managers to work actively with all of their employees. His message to them is: “I need you to be more of a concertmaster, getting the most out of each employee, rather than treating everyone the same,” he says.

There is low-hanging fruit, so you can provide people with some easy wins while you are working on the systemic issues

To be eligible for inclusion in this year’s list of 850, companies had to have more than 250 employees. On average, the highest-ranked tended to do best on LGBTQ+, disability and diversity in general, while they performed worst on ethnicity.

So while the Black Lives Matter protests in the US and elsewhere helped train more attention on race and ethnicity, it was in this category that companies across the list received the lowest scores.

Only eight companies scored at least 3.8 out of a possible 5 on ethnicity: Biocoop, Chiesi, Givaudan, Hermès, Infineon, LeasePlan, Pladis and Volvo Car Group.

There were clear sectoral and national differences, says Camille Simon, who led the project at Statista. Employees in the Netherlands, the UK and Ireland were most likely to approve of their employers’ efforts to promote diversity and inclusion, while those in France and Italy were most likely to feel their companies were falling behind.

Healthcare, travel and restaurant companies — though not retail — led the field on gender diversity policies, while construction companies and oil and gas groups did especially badly.

Meanwhile, banks, IT companies and oil and gas groups led on disability, while alcohol and tobacco companies, wholesalers and business services groups lagged behind in this area.

Despite the greater attention paid to diversity and inclusion this year, the share of women in leading positions remains stable at around 25 per cent. However, Statista’s research both this year and in 2019 shows that companies that do well in the rankings tend to have a higher share of women at the top.

Kjerstin Braathen, chief executive of Norway’s biggest bank DNB, which places fourth in the survey, says the most important aspect is “tone from the top”.

“Diversity needs to be defined as a strategic objective,” she stresses.

“Companies have to wipe out any dominance in the culture,” she says. “In order for people to perform well, they have to feel comfortable and relaxed.”

For companies that want to improve their standing in the rankings, the leaders have this advice: “The most important thing is that it takes time. It is about reception and it needs management and leaders to walk the talk. Finally, it is about culture,” says Infineon’s Mr Fink.

“Keep it simple, build on your strengths and focus on a few things. There is low-hanging fruit, so you can provide people with some easy wins while you are working on the systemic issues,” adds Booking.com’s Mr Stephens. 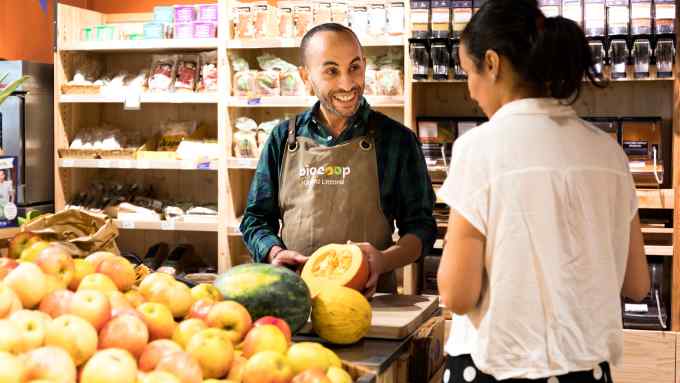