Fewer restrictions than other leading countries and schools remain open

Sweden has become an international outlier in its response to the deadly coronavirus outbreak by keeping schools open and adopting few other restrictions, as the Scandinavian nation embarks on what one health expert called a “huge experiment”.

Since the UK went into lockdown on Monday evening, Sweden is the largest European country with the fewest limits on where people can go and what they can do. Schools for children up to the age of 16 remain open, many people continue to go to work and packed commuter trains and buses were reported this week in the capital, Stockholm. “Clearly, Sweden stands out at the moment,” said Carl Bildt, the former prime minister.

Swedish authorities have banned public gatherings of more than 500 people, closed universities and higher education colleges, and advised workers to stay at home if possible. Authorities on Tuesday ordered restaurants and bars only to serve people at tables rather than at the bar.

Local media have been full of stories of thousands of people gathering at Swedish ski resorts, which until Saturday kept their nightlife open. The virus has previously spread easily in mountain resorts in Austria and Italy.

Johan Carlson, head of Sweden’s public health agency, last week defended Sweden’s approach, saying the country “cannot take draconian measures that have a limited impact on the epidemic but knock out the functions of society”.

But he conceded that the 90,000 figure for the number of people who die annually in Sweden would “increase significantly” if its healthcare system became overburdened.

There have been just over 2,000 reported Covid-19 cases in Sweden and 33 deaths. That compares with more than 6,000 deaths in Italy, Europe’s worst-affected country.

“The future still looks manageable,” said Anders Tegnell, Sweden’s state epidemiologist who has become one of the public faces of the outbreak. He argued that schools needed to stay open to provide childcare for health workers, noting that young people appeared to have much lower infection rates.

But a significant number of Swedish health experts disagree. Mr Tegnell has faced a barrage of criticism after details of the country’s antivirus tactics leaked to Swedish TV at the weekend.

Joacim Rocklov, an epidemiologist at Umea University, said the Swedish authorities were taking huge risks with public health when so much remained unknown about coronavirus.

“I do not see why Sweden would be so different from other countries. It is a huge experiment,” he told the Financial Times. “We have no idea — it could work out. But it could also go crazily in the wrong direction.”

Swedish authorities have said they are not explicitly pursuing a strategy of “herd immunity”, where a large segment of the population contracts the virus in order for society to build up immunity. The UK’s chief scientific adviser had previously suggested that Britain adopt such an approach before the government backtracked.

Sweden is instead seeking to slow the spread of infections and ensure that its health system does not become overwhelmed. Mr Bildt said the situation on the streets of Stockholm had changed “dramatically” in recent weeks despite the absence of legal restrictions, with far fewer people going outside.

But Mr Rocklov said it was not yet known how long immunity to Covid-19 would last. “There is a big risk that Sweden would have to go into quarantine when the health system goes into crisis,” he added.

Sweden’s relaxed approach contrasts with its Nordic neighbours. Denmark, Norway and Finland have closed schools, sealed their borders and imposed other restrictions.

Stefan Lofven, Sweden’s centre-left prime minister, has called on everyone to play a part in stopping the virus from spreading by, for instance, not visiting elderly relatives and working from home. He used a televised address to the nation on Sunday to warn that more restrictive measures might come as he conceded the next few months would be difficult.

“There are a few crucial moments in life when you have to make sacrifices, not only for your own sake but also in order to take responsibility for the people around you, for your fellow human beings, and for our country. That moment is now. That day is here. And that duty belongs to everyone,” he said.

Sweden’s strategy has also been criticised for a different reason, with some arguing that even the lighter measures could cause huge damage to the economy. Kerstin Hessius, a prominent fund manager, is one of those arguing that the country may be swapping one disaster for an even worse one.

Her views provoked a riposte from Leif Ostling, former chief executive of truckmaker Scania, who accused her of living in a “financial bubble”. He urged Swedes not to become cynical and to hold to their “humanist viewpoint”.

Mr Rocklov said it was a “valid discussion” to have over whether the measures aimed at saving lives may do even more damage. But he also said Swedish authorities were not giving enough information for people to make up their own mind.

“More and more experts are feeling uneasy with this stewardship. It is not allowing for an open debate. It is rather trying to push down and make people quiet.” 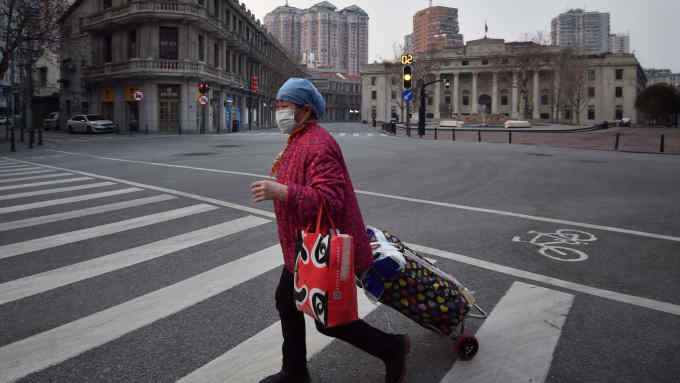