‘How can organisations help women succeed by involving more men in their efforts?’

Having started international initiatives for women in cyber security at two of the largest consulting firms in the world — and faced questions such as “Is it going to be like a knitting circle?” — I have learnt three key lessons on involving more men to help women succeed.

“Hey Power Woman,” Ryan said, walking into the office, jokingly referring to a recent award I had won. “How is the world of diversity and inclusion today?”

I looked at him. He had been teasing me about my Women in Cyber programme for ages. I smiled.

“I am presenting a keynote on diversity at a cyber security conference. You are my co-presenter,” I announced.

“I am pale, male and a little stale,” Ryan protested.

On the day of the event, Ryan made a really heartfelt speech. He said that he had experienced feeling “different” and “other” because he came from an armed forces background and felt he did not belong in the corporate world.

Through this experience, I learnt that making a sustainable change is about influencing the men who are natural allies for women but also about persuading the unlikely male allies for whom there are costs — being seen as a wimp or being perceived as fake, for example. Acknowledging this and showing empathy can help us to influence unlikely allies and bring them on side.

Change is . . . also about persuading the unlikely male allies for whom there are costs — being seen as a wimp or being perceived as fake

By thinking through the ideas of diversity and inclusion with me, Ryan not only became more self-aware but also more empathetic. He began to take an interest in the subject of supporting women in a field where only 11 per cent of the workforce was female, and became one of my most outspoken allies.

Data from Boston Consulting Group shows that among companies where men are actively involved in improving gender diversity, 96 per cent report progress, compared with 30 per cent where they are not. So, it is critical that we include men in gender diversity programmes.

In a speech at the United Nations in 2014, actress Emma Watson launched the HeForShe campaign saying: “I am reaching out to you because I need your help. We want to end gender inequality — and to do that we need everyone to be involved.”

It contended that the initiative asked men to “take action against all forms of violence and discrimination faced by women and girls” but said nothing about problems affecting men and boys.

This is a conflict we see all too often. Simply inviting men to attend women’s initiatives may make them feel awkward, like “the other” and sometimes even anxious. To truly make men feel included, they must be given both a seat at the table and a shared purpose. For example, my first Women in Cyber leadership team had a balanced number of men and women and by doing this, we cut through the noise of “where are the men?”.

Harvard Business Review notes that “too many organisations still miss the mark on gender equity efforts by focusing gender initiatives solely on changing women — from the way they network to the way they lead”.

Women are often told they are too bossy, too meek, too assertive, too giggly or too something or the other. The problem is exacerbated when there are not enough visible female role models.

Jacinda Ardern’s style of leadership based on empathy is praised worldwide. Women look at her and see a role model

Ten years ago, there were hardly any visible women leaders in cyber security and big conferences on the subject had hardly any female speakers. When we went to work at client offices, we were often mistaken as secretaries for our male colleagues.

When we started my first Women in Cyber initiative, we did a few focus group discussions to understand what really needed to change. The women we spoke to overwhelmingly told us one thing — they did not see enough female role models to believe that cyber security could be a long-term career option for them.

Inviting women to speak at bespoke events created by us and profiling them in our newsletters became a crucial part of our strategy. Seeing these wonderful women made us all believe the art of the possible and visualise what we might one day become. After all, seeing is believing.

At an international level, if we look at Jacinda Ardern, New Zealand prime minister, as an example, her style of leadership based on empathy is garnering praise worldwide. Women look at her and see a role model, someone to emulate. But more importantly, her example shows men around the world — both the leaders and the ones just starting out — that a different kind of leadership is possible.

The writer is chief information security officer at Danone 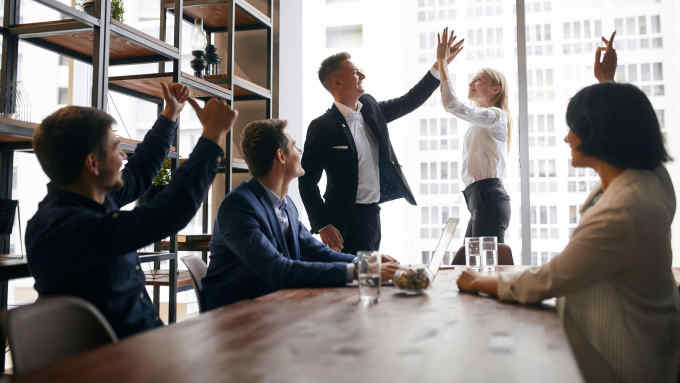