Lead the way with 50% off
How To Spend It Fashion

The only suit you need...

But would that really work on me?” I wondered dubiously, clicking through images of an olive jumpsuit by Alex Mill. I ordered it anyway and, soon after it arrived, bought a second in black. Made from a brushed washed twill with buttons and a belted waist, this one-piece felt like armour – streamlined and breathable without being restrictive or costumey.

Though much of my closet has remained largely untouched for the past year, my jumpsuit collection has provided a respite from the monotony of elastic waistbands and fleecy sweatshirts. Without having to pair a top and bottom, I can focus my energy on bold accessories and a swipe of lipstick that are more visible over Zoom anyway. I’ve worn them to work, to play, to lounge. The utility jumpsuit has become my uniform.

Since the late 19th century, when mechanics on the American railways wore them to protect their clothes from boiler soot, one-pieces have been favoured as workwear. But their practical nature has now featured in the collections of major fashion houses – Stella McCartney’s takes on the silhouette include embellishments and acid-wash fabric, while Gucci’s versions draw inspiration from the flared bottoms and cinched waists of the ’70s.

We always say, what’s cooler or easier than a jumpsuit?”

Alexander Drexler founded Alex Mill as a menswear brand in 2012, with a goal of creating versatile and timeless clothing. “Uniforms are more inherent to menswear,” says Somsack Sikhounmuong, its creative director and founding partner. “But we thought – why wouldn’t a woman want that approach to dressing?” In 2019, it launched a collection of jumpsuits designed for women that quickly took off. “We always say, ‘What’s cooler or easier than a jumpsuit?’” he adds. “I think a lot of people are intimidated by them at first, but are pleasantly surprised at how uncomplicated they are once they put one on.”

The hard-wearing jumpsuit as a uniform also speaks to another significant facet of design today: sustainability. Brooklyn-based Ilana Kohn, whose Tia Coverall I discovered last summer at the wonderful shop Folk, in Maine, was inspired to create collections of cotton twill jumpsuits, released in different shades each season, based on her own manner of getting dressed. “I find something that works and I buy it in every colour and wear it every day,” she says. My poppy Tia coverall, with its helpfully oversized pockets, has seen me through chilly summer nights with drop pearl earrings, autumn afternoons accompanied by a leather jacket, and winter workdays from home. Her pieces are all fabricated in New York City, a choice she made early on. “Producing locally and knowing all of our vendors personally, we see firsthand what the conditions are like and how they are treated and compensated. That’s important to us,” she says.

How To Spend It
Goodbye, normal jeans: hello haute denim 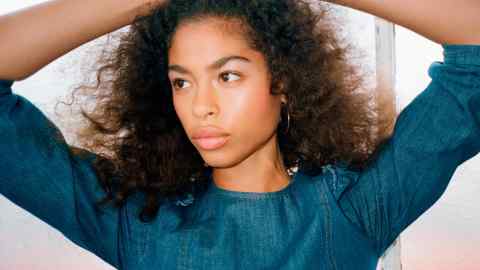 For designer Molly Bloom, who is based in Lewiston, New York State, a single encounter with a jumpsuit clarified her point of view. In 2015, she purchased a 1930s one-piece Women Airforce Service Pilot uniform at a thrift shop in Tennessee. The vintage garment was sturdy yet comfortable, and fit its new wearer perfectly. “That jumpsuit set the course for me to rethink collections with focus and simplicity,” she says. Later this year, Bloom will launch a line of men’s and women’s jumpsuits, which she sees as “a uniform for hard-workers”. She is prioritising fit and size inclusivity – instead of basing her women’s prototype on the ready-to-wear standard of a US 2 or 4, she’ll use an 8. “To me, a jumpsuit replaces the suit and, like a suit, it should fit impeccably,” the designer adds.

Looking ahead to the coming months, when anxiety and isolation will, hopefully, be replaced with optimism and togetherness, I don’t doubt my wardrobe will emerge from its depths. But re-entering the world will require strength, confidence, and poise. Luckily, I’ve got just the outfit.