How I fell for the boxer, again

In a world of teeny tiny briefs, one man seeks a short with tradition

We met in the aisles in Uniqlo. I wasn’t looking for anything in particular; after a rocky few years, I was wary of commitment. But I saw and kept looking and then, inappropriate as it felt, I reached out to touch. Was this okay, I thought as I glanced around. And – wow – was it okay to want more than one?

And that is how I fell in love with the boxer, again.

Boxer shorts versus briefs: there are not enough URLs in cyberspace to accommodate the length and width of the argument. It is, in fact, boxers versus boxer-briefs versus briefs versus trunks, as men’s underwear has evolved over the past century (boxers are often said to have been invented in 1925 in the US, classic briefs following 10 years later); what we can say is that it’s a spectrum, with loose, old-school boxers at one end of the spectrum, and briefs their plucky contender at the other.

In my case, I had drifted more towards briefs and trunks over the years, because I felt, as a single Londoner in my thirties, that this visual – sleek, athletic, optimistically tight – is really what I should be providing. And it is what the culture seems to dictate too: market research a few years ago found that, globally, boxer briefs had the largest share of the market, about 33.3 per cent, but with trunks also popular among a younger crowd. The baggy dilettantism of a pair of retro cotton bloomers, which have long struggled to fit into our ever-tighter trousers, seemed a side concern. But when, in the Uniqlo in Angel, I alighted on the fresh, innocent look of a pair of striped blue and white boxers – it was love at first sight, if love can be bought two for £12.90.

All the boxer shorts I fell for were variants on a theme: blue and white in an assortment of patterns, from gingham checks to stripes to little speckled dots. (One, controversially, was white and lilac.) I bought two to start with and came back a week later and bought two more. You can get similar models from Derek Rose, Emma Willis, or Sunspel; from Dior, Givenchy or Rhude, judging by their recent catwalks; if you head to Rome, you can get a perfect pair from the cult Schostal Dal 1870. To me, it’s clear why these blue-white pieces are so perfect: all the fresh elegance of a Delft tile or a Matisse cut-out – but, you know, emblazoned across your buttocks. What took me so long to see it? I think it comes down to all the big ones: ageing, sex and class.

All the fresh elegance of a Delft tile or a Matisse cut-out – but, you know, emblazoned across your buttocks

My first thought in the aisle had been: could I wear this on a date? I realised I’ve been so conditioned by so many great brief adverts, then by so many inane Instagram posts of models and influencers, that I had slowly ended up assuming that wearing briefs (or again, trunks, so flattering on the thigh) would ensure fine wine and a roll around the fireplace – while boxers mean a cocoa and Wolf Hall. But it was, it turns out, just a lazy prejudice. Just think of Nick Kamen in his crisp Sunspel boxers in that laundrette in the famous Levi’s ad from the 1980s; Sunspel informs me that their classic all-white model has remained a bestseller ever since. The boxer has always seduced – although on the condition, surely, that they don’t creep down to the knee, or billow.

Next, I fretted about whether wearing boxers represents some kind of low-key cross-class cosplay. Was I dragging up as a Brideshead-lite neophyte or a Thatcherite barrowboy banker? I can’t deny that that is part of the appeal. Somehow, I view these boxers – the ones which, yes, Americans popularised first, which I first found in a Japanese high street store – as representing a durable, traditional vision of classic Britishness that hasn’t been entirely tainted by the culture wars. That’s the base note, anyway. They can also evoke Royal Copenhagen, summer’s fresh table linen or a sunny romance by Eric Rohmer. (Or they would if I ironed them.)

Some research suggests that I may be in good company. Sunspel, again, says that sales of boxers in general make up 60 per cent of underwear sales, versus all briefs and trunks. MatchesFashion reveals that “shorts from Tom Ford and Derek Rose continue to connect with our customers as a luxurious option, and an update on the ergonomic design, with snug fits from Zimmerli and CDLP, mean this style staple is going nowhere.” Considering wider trousers are more fashionable again now, which surely allows more space for boxers, I’d like to believe it. Mr Porter says that “boxers account for four in five underwear sales, versus briefs” – but with the caveat that “anything boxer related, including boxer briefs and trunks would fall under boxers”. Hmm. So perhaps what this all just means is that the halfway houses – the boxer briefs and trunks – will continue their inexorable rise. 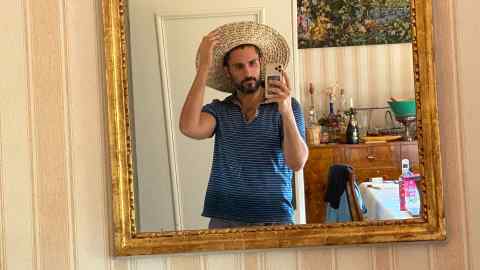 It’s surely no coincidence I fell for these boxers just as I turned 39. Over the past few years, my mind has accommodated itself – sometimes slowly, sometimes hysterically – to the prospect of 4-0, and these boxers feel part of the “change”. It’s obviously another dumb assumption on my part, since I’ve seen everyone from teen skaters to prim young bankers wear them in their prime; nevertheless, I’ve tended to relate them to midlife. But then maybe that’s no bad thing. As I dress each day, I tell myself that boxers convey a more mature, more confident masculinity – less desperate to be rigged up and contoured, less clamouring to be seen. They feel of a piece with trends such as “Dad-bod” or “normcore” – which often are, after all, just hot new ways to sell you being middle-aged. That, and let’s be real here: they’re also great once you’ve gotten a little fat. Boxers, in other words, allow you so many ways to breathe.