The case for civic-minded individuals to step up has never been stronger, yet the disincentives are growing stronger still

It is a truth universally acknowledged, that a person in possession of a good fortune, must be in want of a publishing empire. Down the years, newspapers and magazines — and more recently, news websites — have been almost as ubiquitous rich people’s playthings as yachts and private jets.

While easy to mock, the curious mix of ego and civic-mindedness that draws the wealthy to publishing has subsidised journalism since its very beginning.

And now that advertisers have found alternative ways to reach their audiences beyond attaching themselves to the news, that subsidy from the wealthy is looking more important than ever to the future of journalism.

Whether we are talking about supporting local news, hollowed out by the decline of print revenues, or national coverage, drowned out by social media and undermined by populist political rhetoric, the case for civic-minded individuals to step up has never been stronger.

Yet the disincentives today are perhaps growing stronger still. You would have to be a particular kind of crazy to want to be a media baron in the 21st century.

Buying a traditional media outlet is akin to catching a falling knife in most cases. Just ask Chris Hughes, Facebook’s co-founder, who burned through $20m in a vain attempt to retool The New Republic magazine for a digital age. Starting an online publisher from scratch can be just as dangerous and ugly: Joe Ricketts, the TD Ameritrade billionaire, closed his New York local news site DNAinfo when journalists tried to unionise for better pay.

And the financial risk is just the half of it. How many people really have the stomach for the ideological warfare that consumes most of the news business now? Protest you are a non-partisan supporter of impartial journalism, sure, but ownership puts a target on your back, and there are bomb-throwers everywhere.

In his attempt to undermine the Jeff Bezos-owned Washington Post, Donald Trump has made sinister attempts to cause commercial difficulty for Bezos’s other business, Amazon. That should deter most people with significant business interests from adding a news organisation to their portfolio. 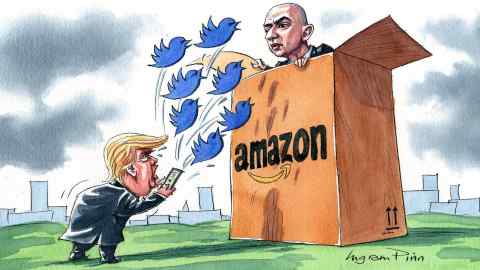 Happily, in this climate, there are a proliferating number of ways for the wealthy to support journalism in the public interest without inviting attack. The US in particular is seeing some interesting innovation that could reverse the decline of local journalism.

Last year, the US Bureau of Labor Statistics reported that the number of newspaper jobs had shrunk by 60 per cent since 2001, and the growth of internet publishing has not been nearly enough to replace them.

One of this year’s most interesting philanthropic developments has been the funding of journalists who can be parachuted into newsrooms in need. Report for America — a charity founded by veteran reporters and backed by the cable TV entrepreneur Gerry Lenfest as well as Google and the Knight Foundation, among others — announced last month it would pick up half the tab for reporters at nine US news organisations. It says it is tackling “the crisis in local journalism, a.k.a. the crisis in local democracy, a.k.a. why you can’t find out if your water is polluted or your mayor is corrupt”.

The Nieman Foundation is also handing out fellowships for investigative reporting. All this comes on top of the by now well-honed model of collaborations between traditional newsrooms and non-profit investigative reporting outfits, most famously ProPublica, which was set up by subprime mortgage moguls Herbert and Marion Sandler. The past year has spawned new non-profit arms at high profile newspapers such as The Guardian in the UK or The New York Times in the US, specifically to funnel support for journalistic projects in the public interest.

Fair Shot: Rethinking Inequality and How We Earn, by Chris Hughes. Being Mark Zuckerberg’s college roommate may not qualify Hughes as an expert on welfare policy, but it, and the fortune he made as a co-founder of Facebook, give him a platform to air the case for a universal basic income, which might be the most disruptive idea championed by Silicon Valley since, er, Facebook.

This is one of a series of articles published in advance of the appearance of the May 4 edition of FT Wealth.