A pepper pot fit for a club impresario – and other stories

“Comfort is king,” says British businessman Robin Birley when asked about the success of 5 Hertford Street, the private members’ club patronised by royals, politicians and pop stars, which he opened in Mayfair in 2012. The club, described as the most secretive in London, was chosen by the Duke and Duchess of Sussex for their first date – and the foreign secretary Liz Truss reportedly “refused to consider anywhere else” for a work lunch last June. It’s akin to stepping into an English country house steeped in the traditions of old-world etiquette – members are expected to “be well-dressed at all times” – where guests (and their dogs) are graciously entertained.

This is Birley’s private utopia. At 63, he’s never seen out of a suit and tie and is a noted dog lover (“I love to see them around the place, because it means that there’s not one left at home alone somewhere”). He meets me at the address to discuss the launch of Birley, his inaugural homewares collection – a curated offering of vintage and custom-made pieces, from tableware and Murano glassware to cushions in upcycled fabrics, in a range priced from around £55. Some of the pieces are already in daily use at 5 Hertford Street; future lines, encompassing furniture and lighting, will continue to echo the venue’s interior themes.

“It began when I was sitting with people at lunch and dinner. They’d ask where to get a certain glass or plate and I would always tell them they could just have one,” Birley says of the collection, which will be sold via phone or email (a catalogue will be available to view online) and by appointment at his studio across the road. “It’s not been easy to set up. But like all businesses, if you can grit your teeth through the financial pain and come through the clouds, it’s a wonderful thing. It gives me great pleasure.”

The joy Birley derives from creating his own aesthetic world at his clubs (he also owns Oswald’s in Mayfair) becomes evident as he gives me a tour of 5 Hertford Street, which spans several 18th-century houses behind an unassuming red façade. He shows off each room as if it were his own house (his own residence is a stone’s throw away in Shepherd Market): there’s a roaring fireplace in every corner (a must, says Birley), sofas that one sinks in rather than sits on, and eclectic arrangements of artworks and antiques set against exotic wallpaper and ornate rugs.

Family photographs and heirlooms are scattered throughout: pictures of Birley’s brother Rupert (who disappeared while working in West Africa in 1986 and is presumed dead) rest on the mantelpiece of one room. “I named this room after him,” he explains as we look inside, before moving on to one of the two dining rooms, this one named after his uncle Alistair. The splendid artworks here (and that fill every available inch of wall space inside the club) include pieces by his grandfather, the renowned 20th-century portraitist Oswald Birley, who painted the likenesses of royalty and public figures, including his friend, the former prime minister Winston Churchill.

I’ve just bought a massive amount of 16th‑century Spanish tiles. I’ve got nowhere to put them but they will be used

“A club needs that personal connection,” Birley says, as he points to a picture of “the Londonderry house”. It’s a reference to the lineage of his mother, Lady Annabel Goldsmith, the daughter of the 8th Marquess of Londonderry and the eponym for the fabled London nightclub that was owned by her first husband, Birley’s father, Mark, before being sold to Richard Caring in 2007 in a deal worth £90m. “Of course, in a club more than anything else you can’t feel that it’s run by a corporation – you need that connection to a family or person.”

Birley is actively involved in every aspect of the design pieces, from the tableware to the interiors, and worked with Tom Bell and Rifat Ozbek on the decor. The resulting aesthetic updates the grand English country-house style Mark Birley was known for, while adding in lots of vibrant eclectic twists. “Sixty per cent of what I do here is creating something that is super-comfortable,” he says, as we enter one of the rooms designed by Istanbul-born Ozbek, the fashion designer who was favoured by Diana, Princess of Wales, but who has more lately been focused on interior design.

How To Give It 2021
Alan Grieve: the man who made a business of saving the arts 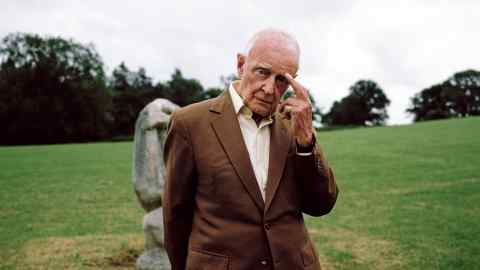 The constant refreshment of objects and designs within these spaces consumes much of Birley’s day. “I absolutely love what I do,” he says smiling. “Friday is a very special day as that is when all the newly framed pictures come in. So I decide where they are all going. And I move plates around,” he continues, pointing to three colourful bowls hung above the doorway of his private drawing rooms in the basement. “I got those from a wonderful place in Seville – and I’ve just bought a massive amount of 16th-century Spanish tiles. I’ve got nowhere to put them but they will be used down the line.”

Down the line, he subsequently reveals, are plans for two new international clubs. “I’m opening in New York in 18 months or so, which will absorb a lot of these things. And then I hope to be opening in Palm Beach, absorbing a great number more. That’s the easy bit,” he laughs.

Birley works closely with a small team that creates custom-made pieces for the club. Creative director Nancy Lichterman oversees the pieces that will go into the Birley homewares collection, and has set up a working atelier at the studio where papier-mâché pieces and cachepots are made, and initials on lighters are handpainted. She has also established relationships with an ever-growing network of artisans utilised by the business.

Chief designer is Italian Willie Landels, creator of the 1965 Throw-Away seat for Zanotta, who first met Mark Birley in the 1950s while working in the art department of the advertising agency J Walter Thompson and who was the founder of Harpers & Queen magazine. At 94, he’s not as steady on his feet as he once was, but his witty sense of humour and bon vivant spirit more than compensate. Among his contributions to the collection is a multicoloured pepper mill. “I think of it as a little toy soldier,” he says of its simple, child-like form.

Landels also designed the blue-rim water carafe and glasses crafted by glassblowers in Murano; one of his trays is decorated in Florentine paper, the same he remembers his mother using to cover books in her library at their house in Milan. “She used green paper for French, blue for English and brown for Italian. The only problem was that you couldn’t see the titles so you never knew what you were getting.” He also steered Birley to use the Italian ceramics maker Ginori 1735 to make the tableware, and is constantly coming up with designs to customise it for the club. Ginori’s delicate teacups have become part of the Birley signature. “Look at the handle on that cup,” Birley says. “It’s a design that hasn’t changed for 250 years.”

Attention to detail is in the Birley blood. Like his father, he is fastidious in his approach. “It’s like constantly having a little pebble in your shoe. If I’m having a conversation and I see a picture that isn’t hung right, I can’t focus. I’m desperate to go over and fix it,” he concludes. “I’ve inherited that irritation, which is about not being happy until things are right. But I think people yearn for that. They want something personal – everything has become about rolled-out homogenisation. That is not what this place is about.”