Luxury trips that pack in philanthropic extras, from Morocco to Misool

Maryam Montague has long been the vanguard of mindful travel in Morocco. A sometime NGO worker, she relocated to Marrakech in 2006 with her husband, Chris, and in 2011 opened Peacock Pavilions, a warm, beautifully designed home/inn/retreat estate 25 minutes outside the city. With its antiques and museum-quality textiles, hand-calligraphed walls, and desert-oasis landscaping, it’s appealing enough all on its own. But there’s undeniable feel-good factor in learning about – and, if you’re lucky, having the chance to participate actively in – Project Soar, the nonprofit the couple founded here in 2013. Serving 24 local rural communities and with 39 further sites across the country, Project Soar empowers adolescent girls through leadership training and counselling.

Girls have access to 25 workshops and activities aimed at building self-sufficiency, confidence and leadership – from managing family relationships to communication skills to becoming, in some cases, Project Soar facilitators themselves. If you’re a hotel guest (as opposed to a retreat one), part of your Peacock Pavilions spend goes to supporting the project; I sat in on a workshop with Montague and 15 high schoolers in 2019 and it was profoundly inspiring. From $200, peacockpavilions.com; projectsoar.org

Help the homeless sleep safe, in London and beyond

A brilliant initiative from the Hoxton hotel group that’s ending soon: For every stay at a Hoxton, anywhere in the world, during the month of February that is booked before 31 January, the company will donate the cost of an equal-length stay in a night shelter for a homeless person in that city. Having partnered with, among others, Shelter From The Storm in North London, Aurore in Paris, the Coalition for the Homeless in New York City, Binario 95 in Rome, Het Stoelenproject in Amsterdam and the Skid Row Housing Trust in Los Angeles, The Hoxton has ensured it’s collaborating with recognised and respected partners.

With Omicron still on a roll, actual travel may not be on the cards. But equally, with the pandemic generally having decimated homeless support – Hoxton brass says the number of beds available this winter is fewer than 1,000, compared to an average of 2,100 in 2019 – people with no place to go need our help more than ever. Think staycation. thehoxton.com/stay-for-a-stay

Dive for a cause in Indonesia

Raja Ampat, in far eastern Indonesia, is home to some of the most pristine corals left in the world – reef systems that thrive on the confluence of cold deep-Pacific Ocean currents and shallow tropical waters, resulting in seascapes of a truly Finding Nemo calibre, with a biodiversity that is all but unmatched. They’re bucket-list stuff for divers and aspiring escapists. But they’re also a long, carbon-heavy trip away for many of the travellers who might want to visit. How to responsibly reconcile the tension these two facts present? You could start with Misool. It’s a lovely private-island resort in the remote southern part of Raja, with 19 one-and two-bedroom villas scattered over a lagoon and along a beach. It’s also a 300,000-acre protected marine reserve the resort’s founders, Marit and Andrew Miners, helped create. And finally, it’s the sister foundation they established, which protects this wilderness through various initiatives – from patrolling for illegal fishing and netting to policy advocacy – and which is underwritten in large part by proceeds from guests’ stays.

Every facet of the Misool experience is conceived to support its continued presence as a force for good here. The villas were all built with reclaimed tropical wood – not one tree was felled in their construction. The resort runs on hybrid grid and solar power, desalination technology, and recycled ground- and rainwater. Staff are taught English and given job training, and Misool’s Ranger Patrol also teaches them custodianship of the environments their communities live in. But it’s the sea that bears out the most impressive statistics: thanks to Misool, since 2008 biomass in the protected zone has increased by as much as 600 per cent, and there are 25 times more sharks within the reserve than outside. From about $4,800 for two for a seven-night all-inclusive stay, misool.info

In 2019, the boutique safari company Asilia Africa undertook a survey of the Usangu wetland, a former hunting concession that was annexed into Ruaha National Park in 2008. The Usangu’s relative obscurity belies its critical importance to the health of both the Great and Little Ruaha Rivers and the Rufiji River system, which feeds much of the Selous Game Reserve (between those two parks, you’re talking about a huge swath of safari-centric Tanzania). But its waterways are under pressure from illegal rice farming, and poaching is problematic. 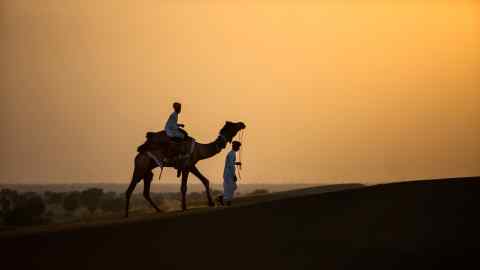 Asilia is addressing Usangu’s problems in part with the opening this June of Usangu Expedition Camp, which partners with local conservation initiatives – and supports the Douglas Bell Eco Research Station, where all conservation efforts are based, and which is right next door. The camp will have just four tents and two vehicles, giving a maximum of eight guests free and full run of a concession that’s 10 times the size of Sabi Sands in South Africa. In addition to canoeing, game walks, night drives and stargazing, they can take part in wildlife audits, collaring wild dog and antelope with the station’s researchers. From $700 per person per night sharing, asiliaafrica.com