If you think the same, join us
Oaknorth Bank Plc

When Rishi Khosla and Joel Perlman wanted to expand their four-year-old financial research business in 2006, the two founders struggled to secure financing from high-street lenders. Yet the company was profitable and had good cash flow.

“We went to commercial banks and got the ‘computer says no’ response,” Mr Khosla says. “We went to another and got it again . . . then we went to a corporate bank and got 100 times the amount.”

The loan allowed the pair to scale up the business, Copal Partners, across 11 markets. They eventually sold it for an undisclosed sum in 2014 to Moody’s, the rating and analytics group.

The frustrating experience sparked an idea for their next venture. “There’s this missing middle — microbusinesses with a few million pounds-plus of revenue — that when you go to a commercial bank get treated like a retail customer,” Mr Khosla says. The result was OakNorth Bank, which launched in 2015 and this year tops the FT 1000 list of Europe’s fastest-growing companies.

OakNorth is part of a wave of “challenger banks” trying to disrupt traditional lenders with digital platforms. But it is one of the few so-called neobanks to make a profit, achieved after its first year of operating.

Becoming one of the most well-funded fintechs in the world has not been without challenges. In 2019, expansion slowed — profits doubled from 2018, having tripled the year before — and the bank saw its first defaults as Brexit, the UK general election and extreme flooding troubled its customer base. It reported a pre-tax gain of £66m last year.

As the coronavirus pandemic develops, Mr Khosla says the bank can “continue prudently lending to growth businesses”, while acknowledging the challenges such businesses will face.

The fintech, which initially aimed to lend a total of £1bn to smaller businesses in five years from 2015, has so far issued £4bn of loans. John Cronin, lead UK financials analyst at stockbroker Goodbody, says all challenger banks stand accused of growing too fast and the specialist nature of OakNorth’s lending market could “limit its scalability” in the UK.

But he adds: “I wouldn’t make the assumption that growing at a decent clip means quality has suffered.”

Hosting its core system in the cloud gives OakNorth an edge over traditional lenders that are forced to maintain antiquated systems and helps it keep employee costs down.

The entire group has about 800 staff across the world, of which the bank employs 240, the majority of whom work on developing its operating system. Mr Khosla says the £4bn worth of loans have been distributed through only eight relationship managers, and “probably five” staff manage the retail and business deposits of its 144,000 customers. 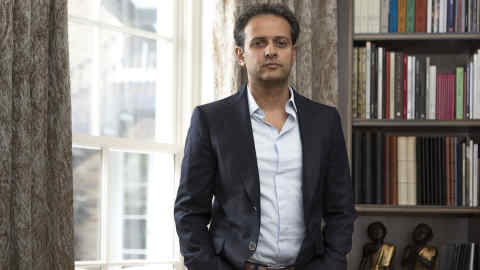 The bank’s success is somewhat of a distraction to OakNorth’s wider aims.

Its main focus now is the credit decision tool, which has been hived off and licensed to other global lenders. “We set up the bank to really prove the technology,” Mr Khosla says.

“We can have the biggest impact by giving the technology to various banks in [their home] countries, rather than . . . setting up in multiple locations,” he says, adding that he wants the licensing arm to hit triple-digit growth.

But while the technology is used by 17 overseas banks for a total £17.5bn assets under management, the service is not yet profitable as a standalone business. Mr Khosla does not disclose financial details, but notes that, together, the group has profits of “strong double-digit millions”.