The fifth-generation Range Rover rides out

How good is the latest take on the iconic 4x4?

The Range Rover is Genesis Chapter One when it comes to riding on- and off-road in comfort and style. Since the original was released in 1969, Land Rover has only updated the model five times in 53 years, which defies the odds in an industry where cars are traded and upgraded as frequently as handheld devices. Land Rover claims that North America is now the Range Rover’s biggest market, which explains why we have all come to California for the launch of this, the fifth generation of the car. And it unquestionably sees the Range Rover at a pivotal point in its history. The car still comes with a choice of both diesel and petrol engines, including the range-topping BMW-derived P530 twin-turbocharged V8. There’s also an expansion of its hybrid offering with a series of plug-in hybrids that offer 70 miles of EV range and, for the first time ever, a fully electric model that will arrive in 2024.

The charming, twisting trails and backroads of the Napa Valley show off the Range Rover at its best. Riding high on the road has become the norm as the SUV craze continues to infect almost every new car, yet sitting behind the wheel of a Range Rover is still a novel experience, unmatched by most of its rivals. Few cars can offer Rolls-Royce levels of ride comfort and in-car serenity while tackling mud ruts, rivers and rocky outcrops with aplomb – all while providing driver and passenger massages with the in-seat bolsters. Since most Range Rovers are destined never to dip a tyre tread in anything more than a puddle, you’d be forgiven for thinking that Land Rover would have given up on off-roading. Quite the reverse – with a tap on the 13-inch touchscreen, the Range Rover can morph into a rough-riding and incredibly capable off-roader just like the original was designed to be, albeit with much more technology and gloss thanks to Land Rover’s Terrain Response 2 programme.

Despite the flagship petrol-engined P530 producing 530bhp and touching 62mph in 4.6 seconds meaning the 2.5-tonne SUV is more than capable of a traffic light dash, it is happier surging forward at a stately pace, as are its occupants. Helping it along are clever electronic stability programmes – which can scan the road ahead and plan for bumps in advance – and fully independent air suspension, which are all paddling away furiously under the surface to keep the Rover flat and composed through the corners.

Our clients said, don’t change it, just make it better

It’s evident that Jaguar Land Rover’s chief creative officer, Professor Gerry McGovern, and his design team opted for evolution rather than revolution. Like the iconic profile of the Porsche 911, the Range Rover remains as recognisable as it always was, with each generation building on the original design. “Our clients said, don’t change it, just make it better,” said McGovern when the new car first broke cover in 2021. “When it comes to fashion and trends, we don’t do that. The design and the whole essence of the car is informed by this modernist design philosophy combined with the evolution of Range Rover over the last 50 years,” he insisted.

With this latest model it’s all about the detail with subtle changes (save for the rear tailgate) coming together to form a well-proportioned, sleek and solid looking car. Its surfaces are clear of lines – something McGovern labels as “reductive design” – which he claims is a reaction to the “abundance of line work” he sees plaguing other cars. While most designers try to hide or disguise an SUV’s mass, the new Range Rover confidently embraces scale. Still present are design cues such as the falling roofline, clamshell bonnet and floating roof, which stem from the original design, while the tapered “boat tail” rear is a marked departure from the previous generations.

Ten years have passed since the outgoing Range Rover was launched. Back then, there was very little competition in the market and in-car technology mainly consisted of sat navs and Bluetooth connectivity. Even the days of dedicated in-car phones were a relatively recent memory. Since then, much has changed with the automotive arms race homing in on in-car connectivity, screens and compatibility more than ever. At the same time, competitors such as the Bentley Bentayga, Rolls-Royce Cullinan, Aston Martin DBX and Lamborghini Urus have sprung up, offering an alternative to the Range Rover, boasting more power and pushing the performance envelope further than anyone imagined possible. 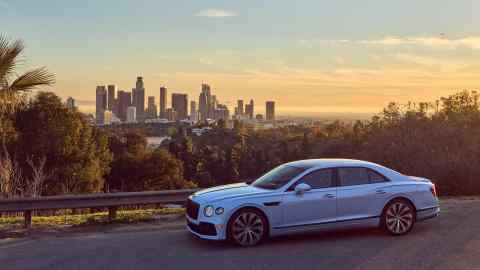 In response, Land Rover has taken note and upped the ante in terms of interior quality, tech and driving experience. On the inside, McGovern and his team have created a sumptuously appointed and almost soundproof “sanctuary”. It’s a very attractive and comfortable vantage point from which to view the world, particularly in the opulent SV model, which sets a new standard for passenger comfort, refinement and overall finish. Prices start at just under £100,000, and rise to well over £200,000 for an all-singing, all-dancing customised SV model.

It might not be as dynamic or engaging to drive as a Porsche Cayenne or Lamborghini Urus, but it’s not trying to be. The Range Rover has always been its own thing, and with cars already being delivered to their new owners and waiting times reportedly at a year for a build slot, the enthusiasm for Land Rover’s new flagship appears to be more frenzied than ever before.