The rich have always craved status symbols, from peerages to spaceships

Burnishing your credentials is much harder today, with deference all but gone and the glare of social media omnipresent
Rhymer Rigby

Can class be bought? A spate of financial controversies involving the newly rich and the British royal family would suggest some still think so — and believe a cheque to charity or a loan write-off is a price worth paying for social elevation. Or just a wedding invitation.

It speaks to a longstanding informal arrangement between the self-made and the aristocracy: We will bring the cash, you provide the cachet.

The late 19th century was the heyday of this. American robber-baron capitalism was powering ahead while the British aristocracy was in decline. In 1874, the tattooed (!) Jennie Jerome, daughter of a New York financier, married Lord Randolph Spencer Churchill. Later that year, she gave birth to Winston Churchill. And, in 1895, Consuelo Vanderbilt, daughter of US billionaire Willie Vanderbilt, married Sunny, Duke of Marlborough. Such matches became so common that the women were known as “dollar princesses”.

Hanging around royalty and aristocrats was not the only way to gentrify yourself. You could — to an extent — join these groups via mechanisms such as the British honours system. That brought instant status, even if you had got your hands dirty in the grubbiest of industries.

But that was then. As with royalty itself, the shine may be coming off titles. If you are a modern success in business, do you want to join a so-called nobility whose most prominent members are oligarchs and political cronies?

There has always been a whiff of tawdriness about burnishing your social credentials to match your wealth. Scandals over the buying of honours caused the practice to be banned in the 1920s. But it is much harder now, with deference all but gone and the glare of social media omnipresent.

Sir James Dyson is an example of how conflicted it can get. His mix of entrepreneurial inventiveness, knighthood and country pile all feels textbook establishment, with a modern twist. Yet it sits awkwardly with his more recent endeavours, such as relocating businesses to Asia and exchanging chummy text messages with prime minister Boris Johnson about fixing tax issues.

More straightforward is Evgeny Lebedev — now Lord Lebedev — the Moscow-born newspaper owner and son of a billionaire ex-KGB officer. Lebedev was nominated by Johnson for a life peerage in 2020 but, arguably, the honour has not improved his reputation. If anything, it has tarnished the institution — the House of Lords — he is now part of and shone a light on reputational laundering.

The opposite approach, perhaps, is to not to gentrify yourself at all. The UK retail billionaire Mike Ashley — arguably best known for being sick in a pub fireplace during a business meeting after drinking 12 pints of beer — is unlikely to be honoured any time soon. But, with Ashley, at least you know what you are getting. Maybe the lesson is that there is no need to gentrify if you are consistent — you can still come across more favourably than those who have tried to airbrush their backgrounds.

In the US, many of the super-rich seem happier to indulge in displays of status that are not obviously linked to notions of class or social betterment. Examples include Larry Ellison’s superyacht one-upmanship and Elon Musk’s Twitter spats, which have culminated in him buying the microblogging platform. 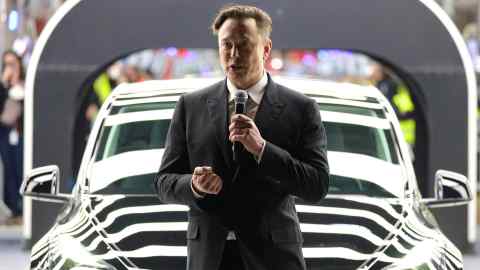 Interesting, too, is the behaviour of Musk’s fellow spaceship aficionado, Jeff Bezos. The erstwhile Mr Chinos and Blazer now has a body that resembles a nightclub bouncer, double dates with Kim Kardashian, and dresses in tight-fitting silk shirts like a Miami Vice extra. To America’s older Wasp elites, this may seem rather déclassé.

But perhaps our notions of social climbing need to change. Harry and Meghan may have fallen out with some of the old British aristocracy, but many of the new Californian aristocracy think they are just great.

For those who want an older version of the US quest for class or status, the best models might be Bill Gates or Warren Buffett. You give most of it away and make your wealth classier by having much, much less of it. That said, neither Gates nor Buffett really needed to gentrify themselves. Gates’s father was a well-known lawyer and his mother came from a prominent banking family, while Buffett Sr was a member of the US House of Representatives.

Even so, there is a lot to be said for giving (nearly) all of it away. These days, Andrew Carnegie is remembered more as a philanthropist than as an industrial robber baron, while many of his contemporaries are remembered as the latter, even the ones who married aristocrats. But giving it all away is hard and nowhere near as much fun as building spaceships or partying with Kim K.

Get alerts on Private wealth when a new story is published