Start a 4-week trial
Managing yourself

The former FT journalist was brought up to despise aspiration. Now she considers it a good thing, but it must be proportionate

Not long ago I had lunch with a friend who told me that his father, who had been a moderately well-known politician, had just died.

What was sad, he replied, was less his death than his life. From a young man he had set his heart on being in the cabinet but never made it beyond junior minister — and never got over it. For the past three decades of his life, he had been bitter, envious, bad company to others and a liability to himself. What had killed him in the end, his son told me, was not the organ failure reported on his death certificate, but thwarted ambition.

A few days later I was doing a podcast with Dame Jenni Murray, the veteran broadcaster. We were discussing our careers post separation from our life-long employers, the BBC for her and the Financial Times for me.

She said she was loving her new freelance existence and felt more carefree than she ever had. The reason: she had not one shred of ambition left. Freed from the monkey on her shoulder driving her on to succeed, she could enjoy the work she did for its own sake.

I said that on the contrary I was entering my seventh decade more ambitious than I had ever been. I was starting a new school in September, would be teaching A-level economics for the first time, and was hell bent on doing well.

These two conversations have got me thinking about both the corrosiveness and the necessity of ambition and wondering how much of it we need, how to turn it off when it’s no longer useful — and how to stop it from doing us in.

Striving for power, position or money

I was brought up to despise ambition. My parents had that snobby suspicion of overt success common in Britain in the middle of last century and disapproved of striving for power, position or money. I would hear them say “He’s very ambitious” — implying that the person in question was only a hop, skip and a jump away from turning into Macbeth.

The Weekend Essay
Can you change yourself? Lucy Kellaway on the reality of reinvention 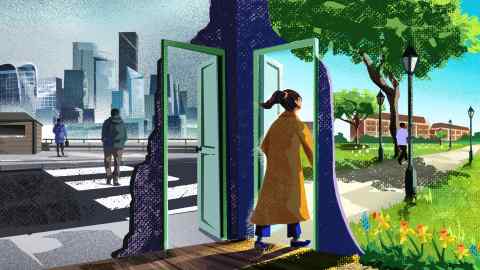 When it came to my own early career as a journalist I would have sworn black and blue that I had no ambition whatsoever — any advancement was simply due to luck.

I changed my mind about 15 years ago when I went around asking all the most successful journalists at the FT if they considered themselves ambitious. The older, posher Brits mostly said no, but everyone else, all the Americans and all younger journalists, said yes.

Suddenly I saw how pathetic the old-fashioned British aversion to visible striving was. All successful people are ambitious. If you want to achieve anything, especially in anything competitive, you won’t get anywhere at all without ambition.

Now as a teacher, I find myself not only pro-ambition, but being forced to teach it to children. “High expectations” are one of the government’s eight teacher standards each trainee teacher must provide evidence of to qualify — the idea is that teachers expect great things from every student so that they can expect great things of themselves.

Just before the end of term I asked my year 11 students to write down what they wanted to do with the rest of their lives. Some said they wanted to make a lot of money in the City and then start their own businesses. Others wanted to be neurosurgeons, professional footballers, astronauts, forensic scientists. One said he wanted to return to the country his parents were from and become a politician and help to resolve the civil war there.

Aim high, but within reason

But as this roll call of ambition continued, I started to feel a bit uncomfortable. I wanted to say: come off it Tommy, you have struggled for three years to see the difference between fixed and variable costs so I’m not sure that the ambition of being Elon Musk is realistic for you.

What comes out of this are three thoughts.

Ambition is a good thing but it must be proportionate. This is true not only of Tommy but of all of us — we should aim as high as we can, but within reason. If my friend’s father had had the more reasonable (but still high) ambition of becoming an MP, he might have died a very happy man.

The second is that if you do not get the success you want, you need to let go quickly, before the wanting destroys you. My brother had the ambition of being a professional oboist. From the age of about 15, this was all he wanted in life and for a decade he did everything to make it happen. But when, in his mid 20s, he realised he was probably not going to get snapped up by the London Symphony Orchestra — or any orchestra at all — he sadly put his oboe away, cancelled his ambition and joined a stockbroker instead.

Lastly, I now see I’m wrong about myself again. Contrary to what I told Murray, I’m not ambitious any more. I’ve looked it up and it means a “strong desire for success, achievement, power or wealth”. I don’t even have a weak desire for three of those and while I do want to achieve as an A-level teacher, that is because I’ll be no use to my students if I don’t know what I’m doing, and I won’t have any fun myself.

One of the greatest joys of getting older is the corrosive side of the striving, the wanting, the envy tends to recede

Now mine is gone, I see more clearly the trouble with ambition. It is not that it turns you into a ruthless, driven version of Macbeth, but that the striving, by definition, makes you dissatisfied with your life at present. Worse still, all the really ambitious people I have known have never been satisfied by achieving the thing of their dreams, they merely concocted an even bigger dream. I daresay that if my friend’s father had made it to the cabinet, he would still have died embittered by dint of not having made it as prime minister.

In the end he was unusual and unlucky to die still holding on to ambition. One of the greatest joys of getting older is the corrosive side of the striving, the wanting, the envy tends to recede. Whether it is because the charms of success, power and money fade as you get older or whether it is because of the diminishing probability of achieving those things — it doesn’t matter. Murray was right: life without the monkey is a good deal nicer.

Lucy Kellaway is an FT contributing editor and co-founder of Now Teach, an organisation that helps experienced professionals retrain as teachers

Get alerts on Managing yourself when a new story is published