While some of Hong Kong’s rich leave, others buy art and pledge to stay put

Pandemic restrictions that only ended in September and Beijing’s political crackdown have driven some wealthier residents of Hong Kong to look outwards — and move their assets abroad or set up home overseas.

Others, meanwhile, have been turning inwards.

And for visitors heading into the sprawling colonial-era house of Laura Cheung, founder of luxury interior design studio Lala Curio, the most striking sight at first is the pearl-embroidered wallpaper with hand-painted coral reefs. The 37-year-old’s property sits on a quiet street in the exclusive neighbourhood of Kadoorie Hill at the heart of Kowloon.

“Imagine haute couture fashion — that is what we do with walls,” she says, describing the 18th century-inspired embroidered wallpaper that has become the signature of Lala Curio, which she founded in 2014.

As they have acquired this affluence, the interior design maven and her financier husband James Wolf have developed a taste for contemporary art. In their living room is British abstract artist Victor Pasmore’s limited edition “Look into the Pool Narcissus Found” (1974). The centrepiece of the dining room is a monochromatic ink and gouache work by Chinese-French modern artist T’ang Haywen.

Cheung’s bespoke wallpaper and furniture business continues to enjoy boom times, too — reporting revenue growth of about 20 per cent in 2021 compared with the year before on the back of increased home renovations. This is despite a general economic slowdown, with the city in recession in the first half of 2022.

Nor is Cheung alone in her success. Across Hong Kong, the wealthy are renovating their homes with expensive fittings, buying luxury goods and putting money into expensive art. Far from thinking of leaving the territory — like some of their rich friends and acquaintances — she and her husband have been staying put and spending.

At one level, it is a worldwide trend. From fine art to fine wine, luxury-sector companies have bounced back from the depths of the pandemic as their super-rich customers have, so far, been largely immune to global inflation and economic turmoil. After its worst decline on record in 2020, the global personal luxury goods market grew last year to reach €288bn in value, up 7 per cent on 2019, according to consultancy Bain. It says 2022 began with a further healthy rise.

In Hong Kong, though, the picture has been quite distinctive, with some of the super-rich spending locally while others have moved abroad, joining an exodus of more than 153,000 residents since the beginning of 2021. The territory has recorded a 14 per cent drop in the number of millionaires in 2022 compared with last year (that is, people with at least $1mn in liquid assets, according to residency advisory firm Henley & Partners). With about 125,100 millionaires out of a population of 7.3mn, the city fell by four places to 12th globally for the number of high-net-worth individuals.

Some high-profile tycoons’ fortunes have shrunk. Joseph Lau, a property billionaire and well-known art collector, now has a net worth of $13.5bn, compared with $16.9bn in 2019, after investment losses, according to Forbes. Lau auctioned off more than HK$113mn ($14mn) of Chinese imperial porcelain his year. Yeung Kin-man and Lam Wai-ying, owners of Biel Crystal, one of the world’s largest smartphone screen makers, are now worth $8.9bn, down from last year’s $18.6bn amid slowing global smartphone sales, Forbes’ research also found.

But the wealth of others has soared, notably that of the Cheng family, which posted surging sales at its Chow Tai Fook Jewellery Group. The family wealth has risen to $26.4bn this year, compared to $22.1bn in 2021, according to Forbes.

By comparison, the number of millionaires in Singapore, which began relaxing Covid-19 curbs much earlier than Hong Kong, has grown 1 per cent since the start of the year to 249,800 out of a population of 5.5mn. 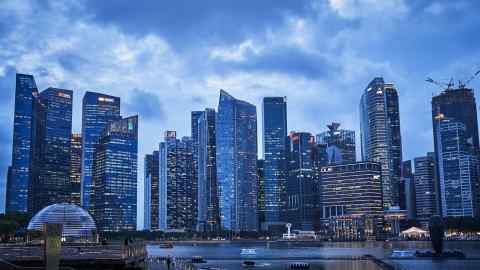 However, the dent to Hong Kong’s overall wealth pile has been limited. “There are indeed individuals who chose places with more opportunities and with lower risks to place their assets, as some have been concerned about the changing political scene in Hong Kong and its uncertain economic outlook,” says Alan Luk, chief executive of Hong Kong-based Winner Zone Asset Management and former head of private banking and trust services at HSBC’s Hang Seng Bank. “But I don’t think that has accounted for a significant portion of the wealth.”

Businesses catering to wealthy consumers have told the Financial Times that high-net-worth individuals with roots in the city have been undeterred, buoying demand for luxury goods in the absence of well-heeled tourists. That is helping the local economy at a time when overall business activity has been sluggish because of pandemic restrictions.

Cheung inherited the wealth to kick-start her business from her father, who made his fortune producing rosewood furniture in mainland China at the dawn of the city’s postwar economic revival. Her younger brother is in the food tech business, and her older sister owns a luxury French pâtisserie in Hong Kong.

It is a tale as old as the former British territory itself: almost 70 per cent of all listed companies in the city are family businesses, according to a report from consultants PwC last year. “All my friends with roots here, [the place] where their grandparents, their parents, made their wealth, are basically not going anywhere,” Cheung says. “There’s sort of an obligation to stay here . . . some of them with their family names, their legacy is here.”

Art has become a favourite asset for locals with the money to spend. Sotheby’s 2022 spring auctions in Hong Kong in May recorded near all-time high sales of HK$3.9bn, fuelled by greater participation. Record-setting art works included the ink and colour on silk hanging scroll “Landscape after Wang Ximeng” (1947) by Chinese artist Zhang Daqian, which sold for HK$370mn.

“From friends in the arts business, we know . . . they are going back to what you call blue chips, your Picassos and the big, better-known names that people feel more confident in buying,” says Cheung. “For the ultra wealthy, it’s really a no-brainer. Nothing is stopping them. [People are] probably spending even more because they are not travelling. It’s like they are bored.”

Cheung’s business Lala Curio has collaborated with auction group Christie’s in a luxury sale, which included its hand-painted wallpaper, adorned with monkeys and crocodiles fighting over Birkin bags. The product’s distinctive style has also attracted the attention of Bling Empire, a Netflix reality series in the vein of the comedy drama film Crazy Rich Asians, and will be featured in an episode in which one of the main characters redecorates a Los Angeles home.

Across Hong Kong harbour in Mid-Levels, an affluent area popular with expatriate financiers and celebrities, sits a 3,000 sq ft apartment with a panoramic view of the Central business district. It is home to Singapore-born restaurateur Yenn Wong. The 43-year-old entrepreneur, chair and founder of Hong Kong-listed Jia Group Holdings, which has a market capitalisation of about HK$60mn, runs a dozen restaurants across the city serving Chinese, Spanish and Italian cuisine, among others. The group’s fine-dining establishments, such as the Michelin-starred Duddell’s, Andō, and Louise, are often booked out months ahead.

Wong is the daughter of self-made Malaysian business tycoon Danny Wong and started her first business in Hong Kong in her early twenties after majoring in economics at the University of Western Australia. Her first project was the Jia boutique hotel in Causeway Bay. She hired French star designer Philippe Starck to help create it and it opened in 2004, before being sold some years later.

Wong and her husband Alan Lo, son of batterymaking tycoon Victor Lo of Gold Peak, and a senior adviser for Jia Group, are also dedicated contemporary art collectors. Their latest acquisitions include Polish-Thai emerging artist Oh de Laval’s “What Cannot Be Said Will Be Wept” (2021) and Nigerian painter Wahab Saheed’s “Secret in Scars” (2021).

“The art world seems very resilient from what we see,” Wong says from her home, where she rotates the works on display as often as three times a year. “It is shocking that prices can go up so many times. And because the demand is very high, there are still people fighting for it.

“I would say that the ultra-rich are still very ultra-rich, still shopping for art work and still very active in the art scene. Maybe there is nowhere to spend the money. Everyone is stuck in Hong Kong. People were furiously shopping.”

Younger generations of the wealthy are emulating their parents and grandparents in buying art. Krizia Li, founder of luxury Asian art ecommerce platform Vermillion, says she has seen a stellar recovery in the first quarter of this year, driven by savvy millennials and Gen-Z’ers. “There has been a rise in young collectors,” she says. “A lot of them are the second, third generation that really can reap the rewards of the past few decades of fast growth, and they feel it’s now their turn to enjoy [a luxury] lifestyle.”

Wong has concerns about social tensions in the city, though, especially the division between rich and poor. “Hong Kong is a great place for wealthy people, but it is not so great for [the] not so wealthy people . . . There is still a very serious wealth disparity in Hong Kong.”

However, on balance, she thinks that most of Hong Kong’s rich are positive about the city’s future. “Everyone might be setting up second bases, or everyone may be having back-up plans, and yes, a lot of money has gone out of Hong Kong,” she says. “But people are still staying put in Hong Kong to see what it is like.

“I know with the national security law and all that, it’s causing a lot of anxiety. But I don’t think any of them are giving up on Hong Kong.”