A Marylebone townhouse that brims with bon-vivant verve

“Marylebone is a real village. We have everything we could wish for here: great restaurants, shops and a fantastic Sunday farmers’ market. It feels like a real community,” says Pedro Girao, Christie’s International advisory board chairman. The stylish, ebullient Portuguese dynamo and his Australian husband, the interior designer Damian Byrnes, moved into a slender six-floor c1765 townhouse in 2018 (after some renovation), and Byrnes has decorated it with cool restraint to best showcase the couple’s love of furniture and art.

A lifetime in the art world, and of being entertained by some of the most stylish people on the planet, has certainly come into play in the home that the couple have created for themselves. “It’s also really handy if you need a doctor,” chuckles Byrnes of their close proximity to Harley Street’s “medical mile”.

Until the pair met in 2010, and indeed for some years after, Girao had no desire whatsoever to move to Marylebone. He had lived contentedly in South Kensington since arriving in London, aged 18, in 1976, having left his native Lisbon to finish his education following the Portuguese Carnation Revolution of 1974 (so called because soldiers placed carnations inside their guns and pinned them on their uniforms). “Things had changed so dramatically for privileged families like mine. It was the safer option for the children to be sent out of the country,” he says. But despite being “more than a little bit homesick”, he quickly formed a new community, and London became home.

Byrnes also fell in love with the kind of life that London offered. Slim, with a shock of silver hair and a breezy manner, he moved to the UK from Australia when he was 26 and settled in the West End a decade later. “The area was bustling with energy. I had a bird’s-eye view of Piccadilly, which was magical,” he recalls of his adopted hometown. Visiting Girao at his flat in a quiet residential corner of South Kensington was, he says, “like going to the countryside”.

The pair come from very different worlds. Byrnes grew up in a town called Charters Towers in north Queensland, which became rich from gold mining towards the end of the 19th century. “It’s a very small town where everyone wears a 10-gallon hat!” he says. He settled in London to work as a lawyer but switched careers three years ago to follow a lifelong interest in architecture. “It’s been one of the best decisions of my life,” he says.

Girao, not wishing to follow his father into the family commodities business, charted a career course that led him to an antiques business, Burness Girao, established in 1988 with his friend Louise Burness, before taking him to Christie’s. His address book of collectors reads like a Who’s Who of European nobility and style doyens, from the late Nan Kempner to Annette de la Renta and Valentino Garavani. He and Byrnes spend summers on the Mediterranean, winters in Gstaad, and the weekends in between at their Lisbon apartment.

Girao’s heritage informed the design of their London home, where they worked with Portuguese craftspeople. “These were all the family-owned companies that my mother worked with in my childhood, so there was a lovely sense of continuity for me,” says Girao. “They recreated all the Georgian-style panelling and cornicing that had been stripped from the house by previous owners, and we also had all the sofas and curtains made there.”

Two rooms deep and extremely bright, the Marylebone townhouse is well proportioned, with wonderful views out to the cobbled mews behind. Inside, there are few decorative distractions: the rooms are painted pale and the drawing rooms hung with pearl-white silk curtains to provide the perfect frame for their furniture and art.

Parallel drawing rooms play host to chubby velvet-covered banquette sofas inspired by the ones designed for the Duke and Duchess of Windsor by Stéphane Boudin for their Paris home: everything comes with an artistic provenance and a careful eye. On the kitchen wall hangs a framed poster of a painting by Alexander Calder that Byrnes bought for £7, while a graphic jute/maguey wall hanging by the artist takes prominence in a drawing room, framing a pair of bronze-gilt Claude Lalanne Chaise Crocoseats. A playful pair of 1950s American red‑lacquer tables discovered on a trip to West Hollywood sit either side of the marble fireplace, adorned with bronze vases that hold sculptural Japanese temple flowers from the Meiji period, made in wood and gold lacquer. Between the windows, a black-lacquer Table Royale from the 1960s by Maison Jansen sits beneath Boxer with a Punching Bag, a gelatin silver print photograph by Diane Arbus.

Next door, pops of contemporary colour are placed alongside classic pieces: a red and white mobile by Calder sways in front of Curved Intersurface from Red, an abstract 1962 monochromatic painting by the postwar Italian artist Paolo Scheggi. In front of the sofa sits a gold “cloud table” topped with a neon-orange Fearless Perspex tray by the couple’s friend Alexandra von Fürstenberg. A pair of 17th-century tables, with Portuguese church-style marble inlays, are split between twin drawing rooms.

“We only really use the sitting rooms when we entertain,” says Byrnes. “That’s why we decided to have a proper dining room.” The couple regularly throw dinners for friends, many of whom come to stay while passing through London. They have set the scene with pale-yellow walls that highlight a black-lacquer and brass dining table and a set of black and white Louis XVI dining chairs that give the room Regency elegance. Portraits of the 18th-century King Vittorio Amedeo III of Sardinia and his consort Queen Maria Antonia Ferdinanda of Sardinia gaze down at diners from above the marble fireplace. “We adore our friends, and the house really is at its best when it has people in it bringing it to life.”

Girao and Byrnes live life at a fast pace – their careers demand it and they enjoy it – and on the rare occasions they spend an evening at home, they eat at the cheery orange leather banquette in the kitchen on the lower ground floor. Byrnes does the cooking before taking the lift up to the den in the mansard of the house where the pair watch TV on large white sofas, inspired by Jean-Michel Frank and strewn with geometric-patterned cushions in fabric by Pierre Frey. Damian has used Crittall glass windows to open up the top floor to a tiny plant-filled central roof terrace that leads to his office. 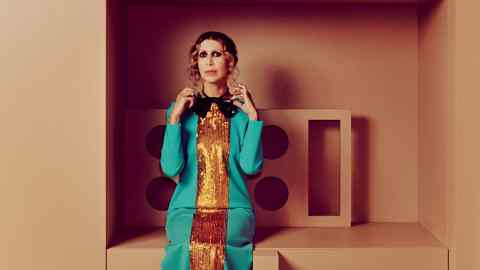 “The thing about this house is that we feel we are living in a space where we have found harmony,” Byrnes says. “We agreed on every detail while making our home. It’s our private space but then when we step out of the front door, we’re part of everything. That’s become rare in London.”

It may have taken 10 years – and a wedding – to persuade Girao to move out of South Kensington, but he has embraced his new home. “He is arguably a local,” says Byrnes. “It takes him forever to make the five-minute journey from our house to Fischer’s (the Viennese restaurant at the top of the high street). Because he stops to say hello to so many people on the way.”