An exclusive interview with the new creative director at Tod’s

For the first time in its 120-year history, the Italian label is being overseen by a single creative force. Walter Chiapponi explains his vision from the Gommino up

Think of Tod’s, and one’s mind immediately conjures up the brand’s signature Gommino: a caressingly soft £340 leather loafer with a penny bar and pebbled outsole. Recognisable but discreet, over the decades it has garnered fans from Diana, Princess of Wales, to Eddie Redmayne. It is also the foundation on which Diego Della Valle, Tod’s chairman and CEO – and the grandson of its founder – has built one of Italy’s largest fashion groups, with annual revenues of €916m and a portfolio that spans Roger Vivier, Hogan and Fay.

Last autumn, Della Valle made a daring move in hiring the well-credentialled but little-known Walter Chiapponi as the first creative director to oversee the entire Tod’s brand – from the women’s and men’s collections to shoes, handbags and advertising. Chiapponi’s task, Della Valle said at the time, was not to remake Tod’s as a millennial-friendly streetwear label, heavily embossed with logos, but “to combine Tod’s Italian lifestyle with a touch of modernity, without losing sight of the high quality and craftsmanship that represents the brand’s DNA”. Evolution rather than revolution, in other words.

The 42-year-old designer made his formal debut on 21 February, showing his first women’s collection at Milan Fashion Week. The following day, northern Italy began to shut down. “The world totally stopped,” Chiapponi recalls four months later from his home in Milan, where he lives with his two dogs in (from the little I can glean over Zoom) a sleek, graphic apartment lined with industrial-style bookshelves and hefty art volumes. It was not the post-debut celebration he had expected – but still, he was pleased. “The first show was very relaxed, very instinctive, effortless… I surprised myself so much.”

“Relaxed”, “instinctive”, “effortless”– all words that could apply to the collection, with its roomy, wide-wale corduroy trousers, boxy blazers and slouchy wool jumpsuits. The palette was earthy, rich; the fabrics and leathers tactile, plush. These were sophisticated, unfussy clothes that one would never have to wriggle and cinch oneself into. Chiapponi could not have imagined that much of Europe and North America would soon be working at home for months on end. This was just the garb to wear in lockdown – and emerging from it.

The clothes also suggested a new way of working at Tod’s. The collection included a patchwork leather coat and separates made out of leather leftovers from Tod’s factories. “For me, sustainability is very important. I love animals – I’m vegetarian,” he says. I ask how he reconciles that with his work at a leather goods house. “I try not to use exotic animal [skins],” he says.

His debut has been well received. “We love the simplicity and quality in the ready-to-wear,” says Tiffany Hsu, fashion buying director of luxury etailer Mytheresa. “Walter has brought a feeling of youth and a more contemporary, minimal aesthetic to the brand that is very modern, without losing its heritage.” Chiapponi describes himself as a hands-on designer. He finds sketching “a bit old-fashioned”, and loves the physicality of manipulating a garment on a mannequin. Often he’ll start by asking an in-house tailor to cut a toile in a simple coat shape. “Then I start to cut, patch, put things together, really physically, very much with my hands,” he says, pressing his fingers together as if pinning a piece of fabric.

Raised in a small town 45 minutes outside Milan, where he enjoyed an “independent” childhood, Chiapponi initially studied art. It was in Paris, ironically enough, that he became interested in Italian fashion, energised by the catwalks of Versace and the up-and-comers Domenico Dolce and Stefano Gabbana. He returned to Italy to study fashion under Alessandro Dell’Acqua at the European Institute of Design.

We’re going to go away from too many logos, from strong colours

Chiapponi would ping-pong between the two countries over the next two decades, moving to Paris to become design director of Givenchy upon Riccardo Tisci’s appointment in 2005. “I was a more bourgeois designer before; he changed me so much,” he says of Tisci. He went to Rome for stretches at Gucci (“A fun place to work, as you can see now in the clothes,” he says), before moving back to Milan to work at Valentino, then for three years at Miu Miu alongside Miuccia Prada. “She is the best,” he says. “Every time she said something it opened your mind.”

When Della Valle came calling, Chiapponi had been studio director at Bottega Veneta for three years, first under Tomas Maier and then under new designer Daniel Lee, the latter a period he describes as “a bit intense”. Strangely enough, Chiapponi says he never considered working at Tod’s, primarily because the brand was known for leather goods and his background is in ready-to-wear. But the combination of Della Valle’s charm (“I totally fell in love with him… his amazing taste for art and architecture, for a way of living,” he says) and the expansive role won him over. As did the history of Tod’s. “In the ’80s and ’90s it was the shoe to be cool – it had a very sophisticated, intellectual [customer], people from the cinema, from the aristocracy, but also from Gianni Agnelli to Basquiat,” he says. “And I thought, I’m in my 40s, it’s a good time to really show my vision.” 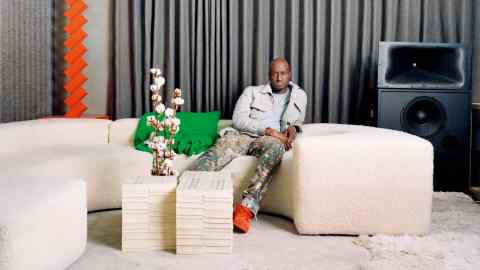 Chiapponi’s task now is to cement that vision. It helps, he says, that he was able to start from “ground zero” – that he does not have to be governed by house codes because, besides the Gommino loafer, there are none. “My approach was to make the wardrobe of the perfect Tod’s customer,” he says of the first collection. That meant the perfect trench coat, jacket, trouser – and imbuing it all with a sense of Italian good taste. What Chiapponi is not interested in is luxury streetwear. “We’re going to go away from showing off, from too many logos, from strong colours,” he predicts. He speaks admiringly of the young people in his studio, who value “preciousness” and “clothes with culture”. “Some of my Prada coats I’ve had for 12 to 14 years,” he adds. “I really want to achieve those kinds of values.”

Chiapponi and Della Valle have their work cut out for them. Even before the pandemic sent the luxury-goods industry into a tailspin, sales at Tod’s had seen four years of declines. Its shares have lost about half their value over the past year.

Tod’s, I point out, is known as more of a lifestyle than a fashion brand. How does that inform his approach? “Fashion to me is not being on trend every season; fashion is a meter for our time, adding care for the way we are dressing. It’s a big step [up from previous roles],” he continues. “Before, I was doing a lot of fittings, working on colour palettes – now I just tell other people to do that. My job is to coordinate – to get all of these people speaking the same language.”