The latest take on the iconic timepiece looks like the original lunar-landing classic. With added star power

I would liken the arrival of the new Speedmaster Moonwatch Master Chronometer to a classic car that has been rebuilt to meet modern standards of crash testing, emissions, brakes, performance, in-car entertainment and so forth while looking near as damn it the same as it did 60-odd years ago. Perhaps think of it like a classic Rolls-Royce with a Tesla engine under the bonnet. Or, better still, taking a biplane and breaking the sound barrier. It’s the sort of watch that cries out for one of those portentous, gnomic maxims such as “everything changed so it could stay the same”.

The Omega Speedmaster is not so much a watch as a religion; one of those timepieces about which everyone has an opinion. When it appeared in 1957 it was the first chronograph to feature a tachymeter scale on the bezel; previously chronograph dials had been cluttered with all manner of esoterica including spiral “snail scales” and subdials that counted the chargeable units of long-distance telephone calls as well as more standard telemeter, tachymeter and pulsometer scales. Intended for use in competitive motorsport and needing to present its information in an easy-to-read manner, the Speedmaster cleared all that crap off the dial. What remained were the pure timing elements: a 12-hour totaliser, a 30-minute counter and sweep seconds. Its comparative minimalism and functional elegance gave it a modern look that outlived its midcentury context to become a classic.

Of course, much of that classic status was bestowed upon the Speedmaster when in 1965 it was selected by Nasa to be worn by the astronauts of the lunar programme. Many other brands went into space; however, only the Omega Speedmaster earned the sobriquet “Moonwatch”, being the first watch to have walked on the moon. But, for collectors, the truly magical thing about the Speedmaster is that it abounds in doctrinal differences. As well as Moon and pre-Moon, there are Professional and pre-Professional models. And that is just the obvious stuff: there is an entire Watership Down riddled with rabbit holes down which to disappear.

Omega has since 1999 become known for its friction-reducing co-axial escapement. In 2016 the brand also introduced Master Chronometer certification which ensured higher levels of precision, resistance to magnetic fields etc. These two characteristics have come to define Omega in the modern age, but the Speedmaster was neither equipped with a co-axial escapement nor Master Chronometer compliant – until now.

Ever since he took over at Omega five years ago, CEO Raynald Aeschlimann has known that he must drag what many regard as a sacred object into the 21st century. Too little change and the watch becomes an anachronism; too much, and he risks the righteous wrath of the Speedy-collecting community. Hence the biggest changes are under the bonnet: the new Calibre 3861 replaces the 1861, itself descended from the 861 which in turn can trace its lineage back to the Lemania 27 CHRO C12 chronograph calibre of 1941. Strings of reference numbers are what get Speedy-freaks out of bed in the morning. Around 50 per cent of the components are new, and not all relate directly to Master Chronometer certification; for instance, the mainspring staff has been slimmed down to accommodate a little more spring, which in turn adds a further two hours to the power reserve. Omega is very proud of those two hours.

When it comes to case and dial it is even harder to spot changes. While genuflecting at the altar of such barely visible but oh-so-important design details as the position of the dot over 90 on the bezel, Aeschlimann has successfully avoided clumsy retro touches. And thanks to a declivity beneath the hour markers there is now 75 per cent more luminous material that lasts three times longer at twice the intensity.

There are versions in rose gold (£29,840) and white gold (£38,830), and two steel models only very slightly different to each other. One has sapphire crystal glass, a transparent caseback, a bracelet that combines satinated and polished elements, and an applied logo on the dial (£6,120). The other is more traditional and features Hesalite (essentially the original ’60s Plexiglas), a solid caseback with the seahorse logo, a dial printed with the Omega logo, and a totally brushed bracelet (£5,370).

HTSI
Bezel friends forever: the duo behind the world’s most expensive jewellery watch 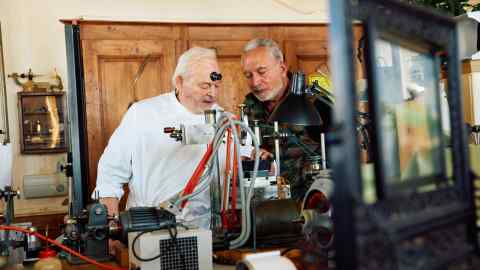 “We wanted to have the Hesalite so you could still buy the watch that inspired you as a child. This is the watch for those who are fans of the original Moonwatch,” says Aeschlimann. “The people who like design” – and want a glass that’s less easily scratched – “go for the sapphire crystal and bracelet with polished links.” According to him, the sapphire crystal is the better-seller. History can only take you so far.