Maverick watches to Marvel at

The new timepieces are an expression of artistic abandon

In one sense the debate about design in watchmaking is otiose. After all, those components – well upwards of a hundred even in the most straightforward timepieces – don’t simply throw themselves together in a space not much bigger than a coin. In watchmaking, as in much else, everything has to be designed. What is often called “the design debate” is more accurately characterised as a discussion about the role of aesthetics in watchmaking. For the purist, the appearance of a watch is dictated by its functions and its movement; the case should clothe the movement (hence the term habillement) and the dial should display the information in the clearest manner possible.

Happily, this maxim is adhered to with varying degrees of closeness and even the most exigent of manufacturers has moments of artistic abandon – as Audemars Piguet showed in March when it announced a partnership with Marvel. Cartoon-character watches are nothing new per se, but mixing them with high watchmaking is generally dated to the 1980s when Gérald Genta’s Mickey Mouse watches made their debut amid considerable controversy. Upon being told that they were undignified for a high-end watchmaker when he exhibited them at the Montres et Bijoux exhibition, Genta packed up his stand and pulled out of the fair; the row made Swiss TV news. Tastes are more developed these days and the purple-strapped, titanium-cased new Audemars Piguet Royal Oak Concept, complete with flying tourbillon and Black Panther character in bas relief seemingly emerging from the movement, is likely to be accorded a more understanding welcome.

Pace Genta, Mickey Mouse watches first appeared getting on for a century ago, during the 1930s. It was a pop-culture moment that placed the wristwatch in the vanguard of early-20th-century creativity. Indeed the early history of the wristwatch is filled with interesting shapes, designs and displays, as wristwatches flaunted their modernity vis-à-vis their pocket-worn predecessors by experimenting with all manner of non-round cases.

When it comes to mastery of the shaped case few can rival the early-20th-century ingenuity of Cartier. This year the French jeweller revisits one of its quirkiest classics: the Cloche de Cartier, a watch shaped like a bell with one straight side and one semi-circular side, and 12 o’clock where three o’clock would normally be. Off the wrist and placed on its straight side, the Cloche looks like a miniature table clock, but the purpose of the design becomes apparent when the watch is worn on the inside of the wrist and its eccentric orientation comes into its own as a driving watch.

Use as a driving watch is sometimes said to account for the configuration of the cushion-shaped Vacheron Constantin American 1921. Like the Cloche de Cartier, 12 o’clock is not where you expect it to be, having been turned 45 degrees clockwise. The winding crown positioned over the 12 in the top right-hand corner of the case betrays the fact that the movement in the original watch was adapted from one used in a ladies’ pendant watch – Vacheron Constantin was not alone among manufacturers who adapted old stock movements to new ways of wear.

Only a handful of such Vacherons were made the first time around and the irony is that the American 1921 is far more popular now than it ever was 100 years ago. The model was first revived in a pink-gold case in 2008, then again in 2017. This year, to celebrate the watch’s centenary, Vacheron Constantin is offering the Historiques American 1921 in white gold as well as a run of 100 pieces in platinum.

HTSI
Watches – from Cartier to Bulgari – are shaping up 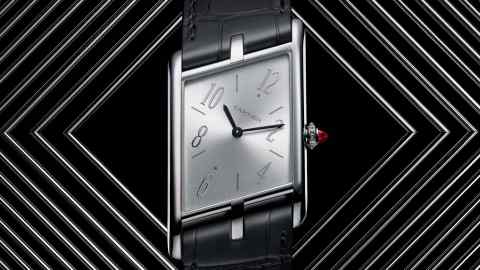 Ten years the American 21’s junior, the Jaeger-LeCoultre Reverso is 90 years young this year and even on the threshold of its 10th decade it is full of surprises. One of the most impressive watches this year is the four-sided Reverso Hybris Mechanica Calibre 185. It makes interesting use of the unique swivelling capability of the Reverso: the original idea was to have a watch that could be worn by polo players, who would flip the watch over to protect the glass. Ninety years on, watch glass is sturdier than it used to be, so the watch’s reversibility has been repurposed to display an array of complications on the back and front of the movement – and on the back and front of the cradle, including a quartet of lunar readings that make this versatile watch into a wrist-worn observatory. The third face, on the inner side of the cradle, displays the northern-hemisphere moon phase, the draconic lunar cycle (height of the moon), and, as I am sure you do not need me to tell you, the anomalistic lunar cycle (its apogee and perigee). The fourth face gives you the phase of the moon in the southern hemisphere.

Of course not all complications are so cerebral and scientific. Louis Vuitton has put micromechanical imagination at the service of a cheerfully ghoulish timepiece that features a time-telling skull in the coils of a snake, with jumping hours visible through a piece of trepanning, retrograde minutes courtesy of the snake’s tail, an hourglass power reserve and winking eye. In case you were in any doubt as to the key function of this timepiece, the jaws open to reveal the motto “carpe diem”.