Disquiet is growing over the way that Oxford university and AstraZeneca have handled the early readout from trials of their coronavirus vaccine, which much of the developing world may rely on to emerge from the pandemic.

The results were hailed a success for showing an average efficacy of 70 per cent — a figure reached by pooling the results from cohorts on two different dosing regimens.

One set of participants received two identical doses a month apart, while the other group received a half-dose, and then a full dose. The efficacy for the first, larger group was 62 per cent. In the second subgroup, it was 90 per cent.

It has emerged that administration of the half-dose started with a mistake. It was then given to a smaller number of participants than those who received two full doses, making the discovery of its greater effectiveness look like a lucky break.

Yet on Tuesday, Moncef Slaoui, the head of Operation Warp Speed, the US government’s funding programme for vaccine development, disclosed that second subgroup was also limited to people aged 55 or below, a demographic with lower risk of developing severe Covid-19.

Video: How the US will roll out the coronavirus vaccine

Oxford and AstraZeneca did not disclose the age breakdown on Monday, when results were released.

“There are a number of variables that we need to understand,” Mr Slaoui said. It is still possible the difference in efficacy was “random”, he added.

Markets have taken notice. London-listed shares in AstraZeneca have lost more than 6 per cent since the announcement. By comparison, since trial results from their vaccine were released earlier this month, showing an effectiveness of 90 per cent, shares in Pfizer and BioNTech have gained 6 per cent and 14 per cent respectively; Moderna is up 11 per cent since its vaccine trial data came out, on top of big gains in the run-up to publication.

One early critic this week, Geoffrey Porges, an analyst at SVB Leerink, said he thought it was unlikely the AstraZeneca jab would get approval in the US after the company “tried to embellish their results” by highlighting higher efficacy in a “relatively small subset of subjects in the study”.

John LaMattina, a former president of Pfizer’s global research and development unit, wrote on Twitter that it was “hard to believe” US regulators would issue an emergency-use authorisation for a “vaccine whose optimal dose has only been given to 2,300 people”.

Much of the confusion stems from Oxford and AstraZeneca not being fully forthcoming on the reason for the two different dosing regimens — which changed unexpectedly as trials progressed.

In a statement late on Wednesday, Oxford acknowledged a difference in manufacturing and measurement processes meant later phases of its clinical studies resulted in half a dose being mistakenly administered instead of a full one.

The Wednesday statement said this was discussed with regulators at the time, who agreed to use two testing regimens. “The methods for measuring the concentration are now established and we can ensure that all batches of vaccine are now equivalent,” it said.

Richard Lawson, a UK trial participant who still does not know whether he was given the vaccine or a placebo because the trial has not yet been unblinded, told the Financial Times he was informed of the mix-up in July, before getting a booster shot.

As a general rule, vaccinologists usually aim for the lowest dose that is still effective, but the efficacy of the lower dose is still not explained.

“Now that we’ve found what looks like a better efficacy we have to validate this, so we need to do an additional study,” Mr Soriot said.

Responding to a request for comment on the Bloomberg interview, AstraZeneca said late on Thursday: “As we communicated earlier this week, there is strong merit in continuing to further investigate the half-dose/full-dose regimen.”

The company said it was further evaluating the data and that it would work with regulators on the best approach to do that, something that would “add to data from existing trials” currently being prepared for regulatory submission.

Oxford professor Sarah Gilbert has said it is possible that a smaller initial dose primes the immune system in a way that better mimics natural infection. But there is no precedent for other vaccines to be administered in this way.

“We just don’t have all the information we need to tell whether these results are reliable,” said Natalie Dean, an assistant professor of biostatistics at the University of Florida. “We certainly don’t have enough information in the public domain to decide whether this half dose is really working.”

Prof Dean contrasted the AstraZeneca disclosures with those from other trials. “We had this precedent set by the other vaccines with Moderna and Pfizer/BioNTech and these were single trials, with a protocol released in advance,” she said. “We had a chance to look through it . . . It was fairly straightforward.”

There are also concerns at variations in the trial of the Oxford vaccine in different countries. As well as different dosing regimens, there were also differences between the control groups in different countries: in the UK, participants who did not get the Covid-19 vaccine were administered a meningococcal vaccine; in Brazil they got a saline placebo.

These discrepancies have led to the suggestion that the data is too patchy to combine into a single convincing efficacy result. 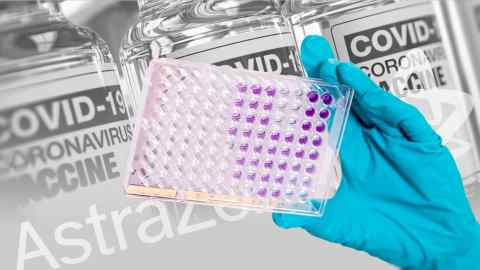 An AstraZeneca spokesman defended the trial, saying they were “conducted to the highest standards” and met their primary efficacy endpoint. The company has said more data will continue to accumulate and additional analysis will be conducted, refining the efficacy reading and establishing how long the vaccine protects against the virus.

The results will appear in a peer-reviewed journal, and regulators have set an efficacy threshold of 50 per cent, meaning a jab with a 70 per cent efficacy would still get approved.

Despite the questions over efficacy, the Oxford/AstraZeneca vaccine does offer some undisputed advantages. It is cheaper than the mRNA vaccines from Moderna and Pfizer/BioNTech and can be stored in a refrigerator rather than a freezer.

Oxford university said it “completely” understood the interest in the discovery of the dosing mistake and the switch in dosing tactics, which was approved by UK regulators.

“As this is a complicated scientific area, our scientists would like to wait until the peer-reviewed publication of the interim phase 3 results in The Lancet [medical journal] before discussing this further, which we anticipate will be in the next few weeks,” it said.