Casa Fendi: ‘It says Fendi, with a whisper’

Autumn in Rome, and there’s a buzz at Fendi HQ where the press has gathered for the unveiling of a new collection by Fendi Casa, the fashion maison’s furniture and home-accessories division. It’s been the year of collaboration for Fendi, part of a series of astute moves by the LVMH-owned house that has built a fashion dynasty on daring creativity and neophiliac spirit, having started life as a fur and leather workshop in Rome in 1925. At Milan Fashion Week, Lila Grace Moss has just closed the week in Fendace, a collaboration between the Italian brands Versace and Fendi. Shortly afterwards Fendi’s creative hook-up with Kim Kardashian’s shapewear brand Skims breaks the internet – and reportedly does $1m in business within its first minute online.

Fendi, it transpires, is also feeling the collaborative spirit with Fendi Casa, having inked a partnership deal with Design Holding – owners of brands such as Flos, Louis Poulson and B&B Italia – to create Fashion Furniture Design (FF Design). Design Holding is a majority shareholder, jointly overseeing design, production and distribution, although the details of the financial deal have not been released.

Fendi Casa dates back to 1987. It was conceived by the fashion designer Anna Fendi, one of the five Fendi daughters of the founders Adele and Edoardo Fendi. Today, it is overseen by Anna’s daughter Silvia Venturini Fendi (artistic director of accessories and menswear; she and her daughter Delfina Delettrez Fendi are the only family members still working at the brand). Venturini Fendi is intent on carrying that torch into the future. For the new collection, she has brought in a design team and will oversee all forthcoming seasons. The unveiling of the collection at Fendi’s home, the Palazzo della Civiltà Italiana building, known to locals as the Square Colosseum, is also significant: a symbol of Fendi’s mission to create closer links between its fashion and home divisions.

What is immediately striking about the new collection – in contrast to the fashion world’s obsession with in-your-face logos (and, to note, the “double F” emblazoned across the new Skims capsule) – is a subtler take on the traditional Fendi Casa aesthetic. While the signature materials, such as leather and detailing, still feel luxurious, the silhouettes of the furniture and accessories are simple and more refined. This shift is a sign of the times, says Venturini Fendi. “Fendi Casa was the first home line from a fashion brand. At the beginning of the ’80s it was portraying the mood of the time and the codes were probably heavier,” she says, adjusting the black-rimmed spectacles that frame her face under a sweep of short blonde hair. “Now the credibility of the house has been built into the pieces, so we really want to work more on the designs of the objects and focus less on the logo.”

We design for people who want pieces that will stay”

Logos, part of the house’s DNA, remain key to the collection, but are discreetly interwoven into print and pattern. And there are clever reminders of the house’s fashion codes: within the new rug selection is a design reproducing the FF logo of the Baguette bag – created by Venturini Fendi in the 1990s and sparking a revolution in It bags for the house – while the Karligraphy logo, designed by the late Karl Lagerfeld (who joined the maison in 1965 initially to reinvigorate its fur line, and continued as its creative conductor until his death in 2019), and mimicking his swirling handwriting, becomes part of a wave-like pattern on its own striking carpet.

Venturini Fendi gets excited about carpets. “Rugs immediately create a strong identity. I define them as sensual – they’re linked to the soft side of Fendi, which has always been very textural if you think of the use of shearling or fur,” says the designer, who took over womenswear for a short time after the death of Lagerfeld before handing the reins to Kim Jones in 2020. “We treat them like we treat our patterns, using them as canvases. I like to have everything very neutral for the furniture but then add a high dose of eclecticism with the rugs. In the future we’re also going to do some tapestries. We are going to use rugs more and more.”

The pairing of forms – interspersed with playful touches of colour and design – turns the focus of the collection onto what the house is best known for: craftsmanship with impeccable precision. “We wanted to do something new, but new and timeless, so I think this is what you perceive when you see the pieces – it is subtle but there was a lot of hard work in making simple things complicated,” Venturini Fendi says. “Look closely and they are very detailed. They say Fendi in a way that is whispered – and this is the most challenging thing to achieve.”

These details reveal much about the inspirations behind the designs. A pair of Metropolis coffee tables by Swiss architect-designers Atelier Oï (Fendi Casa is continuing its tradition of collaborating with outside architects and designers, who in the past have included creatives such as Cristina Celestino) stand on one Yellow Sign carpet. The oxidised-metal base of the tables takes the form of a series of arches – a design detail I later see repeated on a marble dining table of monolithic proportions. Both pieces ignite a sense of déjà vu – which is when one realises that the arches reference those adorning the façade of the Fendi building.

“This place influences all of our collections. Everything is born here. That was why we wanted to show the new Fendi Casa in our own casa. Much of the inspiration – from the colours to the beautiful marbles – comes from here,” says Venturini Fendi. “That marble table is sculpture, but there’s also a version translated into metal, which is so light and airy with a glass top, you just see the bones of it. So it’s about playing with contrast, that is something we do a lot at Fendi.”

Playful juxtapositions thread through the entire collection. At one end of the style spectrum is Thierry Lemaire’s opulent emerald velvet Parsifal sofa, replete with armrests neatly decorated with Pequin stripes (Fendi’s “logo, non logo” created by Lagerfeld and the Fendi sisters in 1983). It could not be more disparate from Atelier Oï’s nubuck Fendi Fun sofa – its couch seemingly bursting at the seams as the stuffing and padding peeks from the loosely pinned edges of the upholstery. Then there’s the Groove & Groovy armchair and footstool by Toan Nguyen, a marvellously mad shaggy throwback to the ’70s in shearling.

HTSIThe HTSI editor picks her favourite reads of 2021
Delfina Delettrez, at home on the Fendi farm 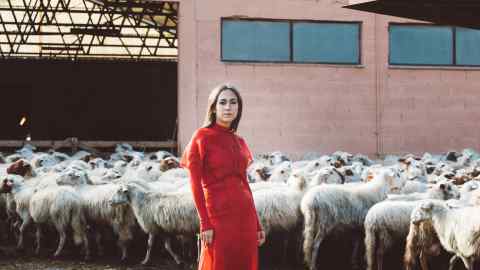 “That beautiful yellow shearling armchair becomes something totally different when you do it in linen, but it still says Fendi,” says Venturini Fendi. “It’s these clashes and contrasts that make the collection so interesting and customisable because we’re not just creating an object, we’re creating a mood. So you can have a very simple sofa next to a very eclectic chair because that’s what makes it exciting.” Eclecticism also extends to the mix and layering of materials: humble bamboo is transformed into an intricate decorative inlay atop Chiara Andreatti’s Astuccio table that’s edged with a metallic finish, while the Delano bed has been updated with a tactile micro-bouclé headboard.

Fendi’s future business approach focuses on integration. The house plans to show its new home accessories – small jewels in their own right – with its fashion accessories in store. “There will also be some furniture pieces mixed in, so basically our collections will increasingly be linked,” adds Venturini Fendi. “The furniture connects with our fashion collections because those men and women who go down the catwalk are supposed to be living the Fendi vision, too. It’s a sort of cycle. We design for people who want pieces that will stay in their house, not just for a season but to be reused and passed on. I like durability in objects and I have exactly the same people in mind whatever I’m designing.”

As part of that vision, a new store – a veritable world of Fendi – will open in the centre of Milan by April 2022. “It will be a big store, everything will be there, and I assure you it will be very beautiful,” concludes Venturini Fendi with a smile. “And look out for lighting. Lighting will be big…”