If you think the same, join us
Chinese corruption

A former Chinese anti-graft investigator who worked closely with vice-president Wang Qishan will go on trial for allegedly accepting “extremely large” bribes, according to the Supreme People’s Procuratorate.

The procuratorate said Dong Hong would be tried in Qingdao, in eastern Shandong province, for alleged crimes committed while he worked at the Communist party’s anti-graft watchdog, as well as at the Beijing municipal and Hainan provincial governments.

Dong was accused of “seeking benefits” while working as a senior inspector at the party’s Central Commission for Discipline Inspection, which Wang headed from 2012 to 2017 before becoming vice-president in 2018.

Wang was a highly regarded financial technocrat before President Xi Jinping tapped him for the enormously powerful CCDI post. While he was at CCDI he oversaw an ambitious anti-corruption campaign that brought down hundreds of senior party and government officials, military officers and executives at many of the country’s largest state-owned enterprises.

In January, Xi described corruption as “the biggest risk to the party’s governance”. Many analysts, however, said the campaign has also been used to intimidate people who might oppose Xi’s plans to begin an expected third term in power next year. Xi controversially abolished term limits on the presidency in 2018.

During his five-year tenure as anti-corruption tsar, Wang was widely regarded as China’s second most powerful official and was expected to exert influence over US relations and other important policy areas as vice-president. However, since leaving the CCDI his public appearances have been largely restricted to ceremonial events with visiting foreign dignitaries.

“Everyone thought Wang Qishan would wield a lot of influence as vice-president but in fact he was not given any major portfolios,” said Willy Lam, a China expert at the Chinese University of Hong Kong. 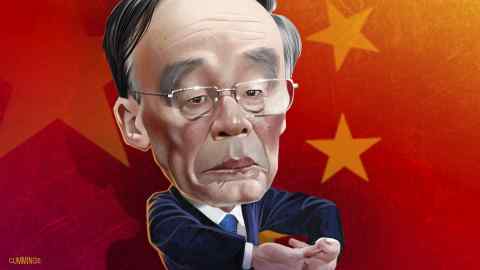 The procuratorate also accused Dong of accepting bribes and other crimes when he held senior positions in the Beijing municipal government and southern Hainan province, where he was deputy secretary-general of the provincial party committee.

While the procuratorate did not say what years Dong worked in Beijing and Hainan, Chinese media reports said he was a top aide to Wang in both places. Wang was the top party official in Hainan from 2002 to 2003, before becoming mayor of Beijing in the run-up to the 2008 summer Olympics that were held in the Chinese capital.

Dong was first accused of “serious violations” of party rules — a common euphemism for corruption — in October and was expelled from the Communist party in April. At the time of his expulsion, the official Xinhua News Agency said Dong had “lost his ideals and was dishonest and disloyal to the party”.

It is rare for close associates of top Chinese leaders to be accused of graft. Ling Jihua, an aide to former president Hu Jintao, was an early victim of Xi and Wang’s anti-corruption campaign.

Ling was accused of corruption in December 2014 and sentenced to life in prison two years later.

Get alerts on Chinese corruption when a new story is published