If you think the same, join us
HSBC Holdings PLC

HSBC has agreed to buy Axa’s insurance business in Singapore as Europe’s largest lender accelerates its investment in Asia as part of a years-long “pivot” to the region.

The UK-based bank said on Monday it would pay $575m for Axa’s Singapore assets. HSBC plans to develop a wealth hub in the country and expand in south-east Asia while it faces tensions in its main markets of Hong Kong and mainland China.

HSBC has scaled up its insurance offering as it has deployed billions of dollars into growing its wealth management services across Asia. Insurance generates about 12 per cent of the bank’s global profits and a third in the wealth management unit.

“This is an important acquisition that demonstrates our ambition to grow our wealth business across Asia,” said Noel Quinn, HSBC’s chief executive. “Wealth is one of our highest growth and highest return opportunities, and plays to our strengths as an Asia-centred bank with global reach.”

HSBC merged its retail and wealth units last year as part of a global restructure to shift its focus to rising incomes in Asia and away from its struggling businesses in the US and parts of Europe. The combined business has $1.4tn of assets, more than half of them from Asia.

HSBC said in February it would invest $3.5bn to grow its Asia wealth operations over the next five years, including hiring 5,000 wealth managers. Most of the growth will be focused on China, which will account for more than half of the hires.

HSBC’s global profits surged from $1bn to $5bn in the second quarter as the bank benefited from a brightening economic outlook amid a recovery from the Covid-19 pandemic in some parts of the world. 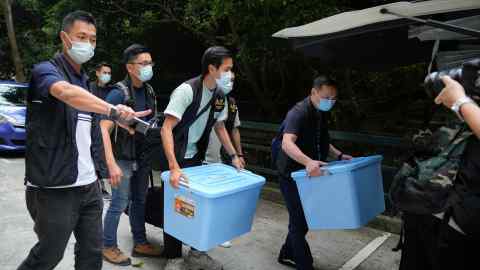 Since Quinn outlined HSBC’s “pivot to Asia” last year, the lender has sold its retail bank in the US and France. In Asia, it has relocated four of its top executives from London to Hong Kong and appointed new co-heads of the region.

Hong Kong and mainland China, which generate the bulk of HSBC’s global profits, have become the core of its growth plans. However, HSBC has been caught up in tensions between Washington and Beijing and faced questions about its future as China tightens control over Hong Kong.

China is planning to introduce legislation in Hong Kong that could ban foreign companies and individuals operating in the financial hub from complying with sanctions against it. The proposed counter-sanctions law could cause greater uncertainty and more problems for multinationals such as HSBC.

Axa previously said it would sell the Singapore business as part of plans to simplify its global operations.