Roman Olearchyk in Irpin, Andres Schipani in Kyiv and John Reed in Lviv

On the road to Irpin, north-west of Kyiv, a long string of cars stand by the roadside — some riddled with bullet holes and mangled or charred by artillery fire. Many have makeshift signs saying “children” on their windscreens; some drivers left baby seats behind in their vehicles, suggesting they fled on foot after a nearby bridge was blown up.

Ihor Litvinyuk, the Ukrainian military commander in charge of securing the area, said he saw bodies of civilians on the ground in the town of Bucha, a few kilometres north of Irpin, which was under Russian occupation until last week.

“There were corpses of tied-up people, we took 20 out of Bucha yesterday,” he said. Litvinyuk estimated that perhaps 300 people suffered the same fate around an area between Bucha and Irpin.

After Russian forces withdrew from the area around Kyiv over the weekend, Ukrainian troops, human rights fact-finders and journalists moved into settlements that had been sealed off from the rest of Ukraine for more than a month. As they did, they took stock of downed power lines, destroyed vehicles and the bodies of more than 200 people, indicating what appeared to be mass atrocities carried out by the invaders. Makeshift graves pockmarked the grounds of parks.

Lyudmila Denisova, Ukraine’s parliamentary commissioner for human rights, said on Sunday that the retreating Russians had mined playgrounds and entrances to buildings.

“The killed civilians lie in the yards, near houses, under the road,” she said in remarks on the social media site Telegram. “Some have their hands tied behind their backs, with signs of torture on their bodies.”

In Bucha, north-west of the capital, where some of the worst violence unfolded, Denisova said the Ukrainian military had found the bodies of 280 civilians, some of whom had been shot. As pictures of bodies beamed across the internet, the international community voiced shock and outrage.

Charles Michel, the president of the European Council, said he was “shocked by haunting images of atrocities” committed by the Russian army, saying more EU sanctions targeting Moscow would be introduced.

In Ukraine, Mykhailo Podolyak, an adviser to President Volodymyr Zelensky, said the Kyiv region was a “21st century hell”.

“The worst crimes of Nazism have returned to Europe,” he said in a tweet, reciprocating the Kremlin’s propaganda argument that Ukraine needed “de-Nazifying”.

Russia’s defence ministry sought to discredit the accusations, depicting them as “another production of the Kyiv regime for the western media”. “Not a single local resident suffered from any violent actions” during its army’s occupation, it said in a statement.

Mine-clearing is under way in the northern part of Bucha, where, according to Litvinyuk, troops used some residents as human shields. “In a couple of days, it will be clearer [what happened],” he said.

Pavlo, a 37-year-old resident, was riding his bike on Sunday in central Irpin as there was no other transport available due to a lack of petrol. He said a local mother of two teenage daughters had been raped by Russian soldiers and only “after that they released her”.

Human rights campaigners said the carnage appeared to be part of a broader pattern of abuses by Russian troops in areas that have come under their control since the war began on February 24, suggesting that other atrocities would emerge.

Human Rights Watch said on Sunday it had documented several cases of unlawful violence it described as “apparent war crimes”, including summary executions and rape, in the towns around Kyiv and in the northern Chernihiv and eastern Kharkiv regions.

The findings fuelled growing calls for Russian president Vladimir Putin and other officials to be held accountable.

German chancellor Olaf Scholz demanded that global organisations such as the International Committee of the Red Cross be granted access to the areas in order to independently document the atrocities. “The culprits and those who ordered these crimes must be resolutely brought to justice,” he said.

Calling the images from Bucha “unbearable”, French president Emmanuel Macron said Russia would “have to answer for these crimes”.

The International Criminal Court opened an investigation into alleged war crimes and crimes against humanity in Ukraine on February 28, just four days after the invasion — an unusually swift move.

Dmytro Kuleba, Ukraine’s foreign minister, on Sunday called on the ICC and other international organisations to come to Bucha and other cities and towns in the Kyiv region to gather evidence of what he described as Russian war crimes and crimes against humanity. He said his ministry had sent a formal request to the ICC.

“We are still gathering and looking for bodies, but the number has already gone into the hundreds,” Kuleba said in an interview published on the ministry’s website. “They killed civilians while staying there and when they were leaving these villages and towns.”

Gyunduz Mamedov, a former deputy prosecutor-general of Ukraine and specialist in international criminal law, said he was concerned that evidence of what he called “war crimes, crimes against humanity and possibly genocide” might be disturbed if steps were not taken rapidly to bring in investigators and forensic tools such as mobile DNA labs and drones.

Ukrainian officials stepped up their pleas for military help to defend their country. “The only way to stop this: help Ukraine kick Russians out as soon as possible,” Kuleba said in a message on Twitter. “Partners know our needs. Tanks, combat aircraft, heavy air defence systems. Provide them NOW.”

Explore the series
READ MOREWar in Ukraine: free to read
‘We packed fast’: those who left Ukraine, in their own words 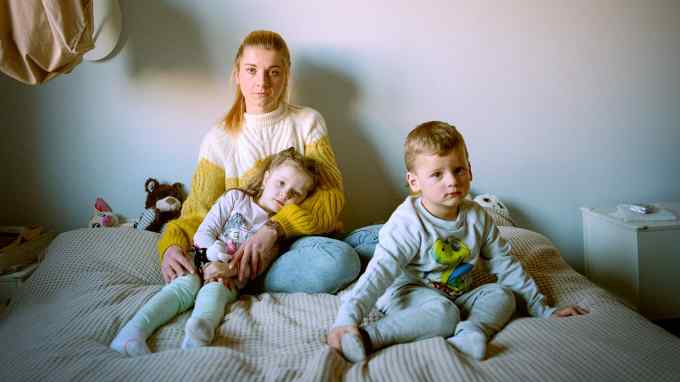