If you think the same, join us
How To Spend It Watches

“Rolex is introducing the new generation of its Oyster Perpetual Submariner and Oyster Perpetual Submariner Date, watches that exemplify the historic links between Rolex and the world of diving.” Much as a Rorschach test can suggest a different image to each viewer, so it is possible to read the above announcement and understand very different things. It could read “watchmaker updates watch”. If so, then I suggest you stop reading now. Alternatively, it could be momentous. If that is the case, you are in for a treat.

There’s a new range of what is arguably Rolex’s most emblematic timepiece, launched all at once and starting to hit the shops now. Does it get any better? It is moments like this that prove the existence of God and, more importantly, that the supreme being is a watch lover.

History, of a horological kind, was made in 1926 by the Oyster

The way in which the launch has been carried out – the watches began to go on sale this week, at the same time as the announcement – disrupts the traditional model of how Rolex has historically marked a major moment. Earlier this year, the pandemic – and the collapse of the long-established watch fair in Basel – led to rumours that Rolex would launch nothing in 2020. Rolex production sites closed on 17 March and, although office staff started to return at the end of April once necessary Covid protocols had been put in place, production staff did not begin a phased return to work until 4 May. It was a further two months before manufacturing returned to full capacity.

But lockdown appears to have sharpened appetites. There were already waiting lists for trophy Rolex timepieces including the Daytona, GMT-Master II and Submariner at the beginning of the year. Now the lists have got longer. What’s more, Brian Duffy, CEO of Watches of Switzerland, who has just opened Scotland’s first standalone Rolex store in Glasgow and will be expanding its Rolex room in Knightsbridge this year, says the waiting lists have broadened to include Sky-Dweller, Yacht-Master and Air-King models. Even 41mm Datejusts with blue and black dials are now hard to find, he says.

If nothing else, the climacteric has given Rolex the opportunity to experiment with a new way to bring its watches to market. In the past the watch would have been announced in spring and arrived at retailers at the end of the summer. But that is not the only aspect of the orthodoxy to have changed. The last time a Submariner was launched, in 2008, it took four years for the entire range to appear: precious-metal iterations first, with the steel time-only version last. This time, you can buy the lot – an 18ct-white-gold Submariner Date with black dial and blue bezel; a steel-and-gold Submariner Date with blue dial and bezel; a steel Submariner Date with black dial and green bezel combo; and the steel time-only model – all at once. (Prices range from £6,450 to £31,850.)

Rolex is umbilically associated with water-resistant watches: founder Hans Wilsdorf, the watch industry’s Henry Ford, was messianic on the subject. As early as 1914, when the overwhelming majority of men still wore pocket watches, he wrote to his factory: “We must find a way to create a waterproof wristwatch.” By 1922 he had come up with the Submarine: a watch with an outer case that had to be opened to permit winding and setting. History, of the horological kind, was made in 1926 by the Oyster, which dispensed with the additional outer case and used a precise screw closure to seal it tight. His next breakthrough was the “perpetual” self-winding movement: now the wearer did not even have to unscrew the crown to wind the watch.

As well as an eye for innovation, Wilsdorf had a flair for publicity, and when cross-Channel swimmer Mercedes Gleitze hit the headlines he made sure that she wore one of his new Rolex Oysters (slung around her neck, strangely enough) during her attempt.

So by the time Jacques Cousteau invented and then popularised scuba diving in the years following the second world war, Rolex had around 30 years of experience in waterproof watches and needed “only” to adapt its Oyster to the requirements of the aqualung enthusiast, with a black dial and contrasting luminous markers and hands. The addition of a rotating calibrated bezel enabled divers to keep track of their dive time. There was a suggestion to call the new watch the Rolex Frogman, but in the end the name Submariner was chosen.

That was in 1953. The Rolex Submariner, made famous by James Bond, who wore one on screen throughout the 1960s and most of the 1970s, has become Rolex’s most emblematic model. And, while over the intervening 67 years the state of the oceans has deteriorated from the underwater garden of Eden into which those first flippered and aqualunged divers swam, the 2020 iteration of the Submariner remains easily recognisable as the descendant of its forebear.

Inside, the Calibre 3130 of the outgoing model is replaced by the 3230 movement. Innovations like the “Chronergy” escapement have boosted the power reserve to three days, enabling the watch to pass the weekend test, in which it can be taken off on Friday night and picked up on Monday without needing to be rewound and reset… Though why anyone would want to take it off for three days is a mystery.

Externally, changes are less immediately apparent. The new Submariner is a little bigger than the model it replaces (41mm as opposed to 40mm), the reflective properties of the steel on the case sides and lugs have been enhanced and the bracelet is slightly different: the central link is 0.2mm broader than its predecessor and the folding clasp has jumped an entire millimetre.

It often appears that the point, or paradox, of the brand is that new generations of watches look as much like their predecessor as possible. Changes between the Submariners of 1989 and 2020, both waterproof to 300m, are hardly schismatic: the former is slightly less sturdy looking, the luminous markers are smaller and the bezel insert is made of aluminium rather than today’s black ceramic. However, that is like telling a lump of Dover chalk apart from a kilo of Roquefort compared to spotting the differences between the new Submariner 124060 and the 114060 it replaces.

And that is what the truly fanatical collectors love. The slightest change in font, the position of the words “Swiss Made” or the angle of a numeral is the sort of thing that sets off a frenzy of excitement. A few years ago there was outrage – yes, outrage – that Rolex had dared to place its cyclops date-magnifying lens on the glass of a new Sea-Dweller (a deep-dive watch), because it was the first time that this had happened since the model’s introduction for saturation divers in 1967.

In this there was a misunderstanding of the Rolex philosophy: the Sea-Dweller of the 1960s had lacked a magnifier because Rolex could not guarantee that such a watch glass would survive protracted deep-dive use. By 2017 technology had moved on and I would argue that not to add the date magnifier would have been deliberately to restrain development of one of its professional models.

To become excessively restricted by precedent would be to risk slipping into a pastiche of the vintage model, and Rolex does not need to genuflect before the retro styling trend. First, because its models are genuine, evolving classics and, arguably more significantly, because it is committed to making the best mechanical watches it can: happy to use automation and robots or skilled human eyes and hands according to which deliver the better results.

How To Spend It
Escape Special: the best nautical watches 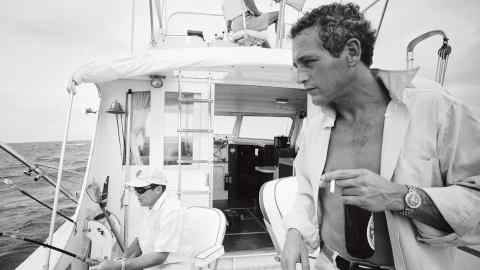 Besides, it has a sub-brand, Tudor. Launched in the 1930s, it was introduced as, in effect, a Rolex for the working man (early advertisements featured motorcyclists and operators of pneumatic drills). But around 2010 it was relaunched with ever-more detailed period-style watches. Although the two brands and price points are very different, it is possible nonetheless to detect a coordinated approach. In 2018, when Rolex rebooted its famous GMT-Master, Tudor issued its own retro-inspired GMT. The most successful of the new-gen, old-look Tudors has been the Black Bay, a retro-style dive watch. This year saw the launch of the Tudor Black Bay Fifty-Eight Navy Blue, which appeared at the beginning of July with a concerted social-media blitz and an attractive price range from around £2,500 to £2,750.

As a strategy, it is characteristically Rolex in that it is simple and it is genius. If you are after a retro-look dive watch, buy a Tudor Black Bay. If you want the premier up-to-date classic dive watch, buy the Submariner… And if you are me, buy both.