With prices to match a ticket to Hamilton, New York’s latest omakase joint Jōji needs to put on a serious show. And it does

I am struggling to follow George Ruan’s hands. My eyes try to keep up as he dampens his fingers, scoops warm grains of rice and gives them an intimate squeeze. A luminous sliver of fish is laid on this pillow. There is a pinch, a roll, a flick of the wrist and a flourish. A few drops of soy sauce are dispensed from a brush and a flawless piece of sushi is revealed in his palm like a coin pulled from behind my ear.

I watch Ruan perform this feat of prestidigitation several times, for me and the other nine diners at his cedar counter, but I still can’t work out the trick. Perhaps it’s the sake.

Ruan is head chef of New York’s newest omakase restaurant, Jōji. Improbably, he created it with the city’s biggest office property owner SL Green and with Daniel Boulud, the Michelin-starred Frenchman behind the Upper East Side’s beloved Restaurant Daniel. Even more improbably, it is in Grand Central station.

Finding serenity in a frenetic rail terminus requires a theatrical suspension of disbelief, I realise, as I cut through the evening commuters. But the approach to Jōji has been thoughtfully staged by Shinichiro Ogata’s Simplicity Design firm. Tucked into a marble-walled corner of the station is an entryway of rocks and plants that looks like an overgrown bonsai arrangement. From a darkened antechamber a twisting corridor puts the station noise behind us before we reach the dining room, where a dark proscenium frames the glow of Ruan’s counter.

Half a dozen stage hands hover in the wings, tucking in seats and offering drinks as Ruan arranges pieces of snapper on mustard greens, brightened by ponzu vinaigrette into a perfect palate-cleansing appetiser. This first act is followed by three pieces of fried tilefish on onion purée, heaped with caviar and tiny pink shiso flowers. It is delicious, I think heretically, but so is cod with tartare sauce.

It is a spectacle, but does repeating a trick spoil the magic?

We get back on track with appetiser three (Japanese grouper in a shimmering umami broth) and then Ruan’s hands are at work on the first of what will be more than a dozen varieties of sushi. The striped jackfish disappears in one cool, warm, sweet, salty bite and I feel momentarily ashamed of how short a time it spent in my mouth compared to how much care went into making it. Soy-marinated tuna fin, sweet amaebi shrimp and pale goldeneye snapper follow. Then a serious figure enters, stage right, with a large sword. Soon, pieces of sea perch are being singed with its heated blade.

I am not sure that the branding improves the flavour, and metallic smoke lingers distractingly while Ruan starts slicing Hokkaido scallops into discs as thin as poker chips. Tangy with yuzu zest, they are the highlight of the meal so far. One medium-fatty tuna morsel later, the sword comes out again, and so do my fellow diners’ iPhones. It is a spectacle, undoubtedly, but does repeating a trick spoil the magic? A little, but that misses the point: the team behind Jōji seem to understand that we are here for a Broadway-level performance. Prices start at $375 per person for five appetisers and 15 pieces of sushi, rivalling tickets to Hamilton.

“I don’t want it to be stuffy,” Ruan tells me. After watching him make a series of feather-light cuts across the surface of one piece of fish, I ask what their purpose is. To bring out the flavour? “To show off the knife skills,” he smiles.

While Jōji nods to the underground omakases of the Tokyo Metro it is not pretending to be anywhere else but midtown Manhattan. Ruan is serious about his craft, but Jōji is more approachable than reverent. The background music is rap. Several of tonight’s clientele work upstairs in One Vanderbilt, SL Green’s $3bn office tower where Boulud last year opened Le Pavillon, a temple for worshippers of a cuisine he has been refining for more than 50 years.

Boulud appears between courses, dispensing bonhomie as he keeps one careful eye on how his newest team is settling in. He hints that not everything is yet quite to his satisfaction, but the mutual trust between the chefs seems clear. 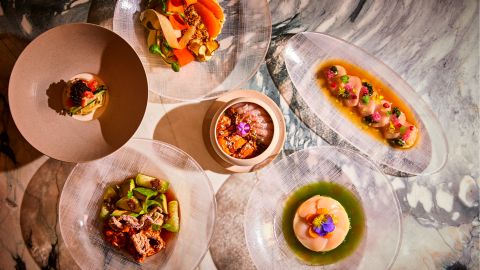 Ruan made his name a little further uptown at Masa, the sushi counter that earned chef Masa Takayama three Michelin stars. Two other Masa veterans, Xiao Lin and Wayne Cheng, have joined him at Jōji, bringing the same uncompromising seriousness about seasonal ingredients. Several of the next dishes – tiny, translucent white shrimp, bamboo-boxed sea urchin, gleaming spheres of salmon roe and blue-tinged mackerel – have been flown in from Japan. They are so delicate, complex and layered that I forgive their carbon footprint.

Our courses are served up at a pace just brisk enough for us to acquire fleeting insights into the particular qualities of Boston tuna or how exactly to toast nori before we move on. There is a second sitting to be accommodated tonight after our yuzu-scented slice of Japanese muskmelon and glass of dessert sake.

When we leave, the grimy reality of the subway will be waiting. We say yes to the offer of a Mars Komagatake single malt, suspend our disbelief a little longer, and agree not to think about that just yet.