If you think the same, join us
How To Spend It Cars, bikes, planes and boats

Heathrow to JFK in under two hours: who’s winning the supersonic jet race?

The challenge to find the successor to Concorde is taking flight. We meet the main contenders

Vik Kachoria, the founder, president and CEO of Spike Aerospace, is setting out his expectations for the future of supersonic air travel, a concept many assumed had vanished in 2003 when Concorde was retired. Formerly employed in mergers and acquisitions in an investment bank on Wall Street, Kachoria is bullish about the future of the face-to-face meeting and the consumer demand for making day trips in one of his private jets, which will cost more than $100m.

Despite scepticism about the potential for supersonic air travel — the cost, the culture, the environmental damage — Kachoria is one of the investors putting his faith, and money, in the future of a new breed of super-planes. Besides Spike, whose planned S-512 will carry 18 passengers and travel at Mach 1.6 (more than one-and-a-half times the speed of sound), Virgin Galactic is working on a commercial passenger jet that will transport up to 19 people at Mach 3 — that’s 2,300mph and a flight time from New York to London of less than two hours. Boom Supersonic’s Overture will carry 65 to 88 passengers at a speed of Mach 1.7. Russia’s United Aircraft Corporation has joined forces with a UAE-owned investment company to develop a plane. And Japan’s Aerospace Exploration Agency is talking about a hypersonic jet with 100 seats that could fly at Mach 5 and cross the Pacific in two hours.

And yet the challenges are many: one of the biggest potential players in the supersonic private-jet market, Aerion, has already thrown in the towel. Despite a $11.2bn sales backlog for its AS2 jet (including orders from NetJets and backing from Boeing and GE Aviation), it closed down its operations citing funding issues earlier this year.

Will there truly be a demand for such machines? In addition to passengers flying to business meetings or on holiday, Kachoria imagines his jet will be useful to mid-ranking employees or engineers. Say you have a car factory where something goes wrong on the production line: “You’re losing $100m a day and you need a specialist engineer fixing that problem right now. You do the math, that’s an awful lot of money if the problem is not fixed.” Then there will be those who just want to show off. Private jets have always had bragging rights, but a supersonic private jet? “It’s a fantasy for some,” says Kachoria.

Fantasy indeed. Aerion’s AS2 had a price tag of $120m. Spike’s S-512 will cost around the same. By contrast the most spacious private jet on the market today, Gulfstream’s G700, costs $78m. Then there is the upkeep. Maintenance is going to be “at least double what the Gulfstream private jets are because you’re burning the engines at a much higher temperature and much higher pressure”, says Kachoria. A Gulfstream can cost anything from $1m to $3m a year to maintain — and that’s excluding fuel, which will be a significant cost when travelling supersonic.

But the biggest issue is less a matter of price and more a question of physics. Concorde could only ever fly supersonic over the sea. The noise that the plane created when it passed the sound barrier was so loud that it was banned from supersonic flight over land in the US. Lockheed Martin, working in tandem with Nasa, thinks it has found a solution with its X-59 QueSST prototype. A demonstration model will take to the air in 2022, and the aim, says Lockheed Martin, is to establish “an acceptable commercial supersonic noise standard and address current regulations banning commercial supersonic travel over land”. The plan is to create a noise that is less a boom and more “a gentle thump” (at 66 decibels, the X-59 should sound no louder than a car door being slammed shut next door).

It is less a sonic boom and more ‘a gentle thump’

If the supersonic ban is repealed in the US, that would open up some of the world’s most popular private routes. At least an hour could be shaved off the New York to Los Angeles route. And trials in the US could convince other regulators that supersonic travel in their airspace is safe. While many countries have not banned supersonic passenger jets, any new aircraft would still need regulatory approval. That would be critical to travellers in Asia and the Middle East, where private jet usage in particular is growing rapidly. To further reduce noise both outside and in, Spike has also designed its S-512 without passenger windows. Instead, LCD screens run right down each side of the plane, which can be used for work and entertainment, or, the showstopper, to provide an unbroken view of the sky outside the plane, virtually opening its walls on to the roof of the world.

But making supersonic aircraft more efficient is about more than merely reducing noise. If private jet and frequent flyers are already under fire because of their carbon footprint, then what of executives flying supersonic to Dubai for lunch? Some supersonic aerospace firms have foreseen this future PR disaster and have pledged to go carbon neutral. Once its S-512 is in the air, Spike wants to start work on a “hybrid” supersonic jet before developing a liquid hydrogen model. Virgin Galactic’s jet will have engines designed in collaboration with Rolls-Royce that use “state of the art sustainable aviation fuel”, it says. 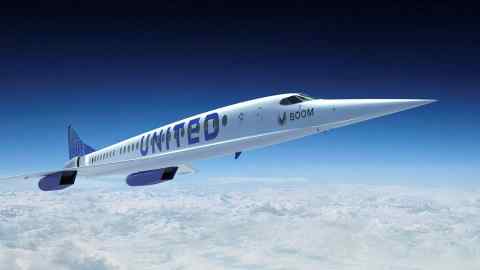 Boom is talking about Overture flying on commercial routes as soon as 2029. United Airlines has an agreement to purchase 15 supersonic jets from Boom Supersonic. Blake Scholl, the founder and CEO of Boom, believes a gap in the market has opened up after airlines spent the past year retiring large Boeings and Airbuses. “People’s tolerance for long, painful flights has gone down,” he says. Yes, business travel might take a while to return, but leisure travel will bounce back: “You don’t want to go on vacation on Zoom. You don’t want to fall in love over Zoom.”