What could seal a deal to end US/China trade war?

So fraught have US-China trade relations become that their impact is felt in financial markets, boardrooms and even central banks. Washington and Beijing ratcheted up tariffs in August and investors took fright, triggering official promises to revive trade talks. But are the US and China likely to pull back from the brink?

It is possible to parse this strategic situation. To start, split this question into three smaller ones. What could be a plausible basis of a deal? What could trigger a deal? And will the deal stick? Let us consider each in turn.

Economic behemoths such as China and the US do not have to sign deals unless they want to. In any serious trade negotiation the question “what is the basis of the deal?” amounts to asking what each party is willing to do and in return for what. Framing the US-China trade talks solely in terms of what reforms China must undertake is fruitless. Returning US tariffs to pre-trade war levels probably won’t balance any Chinese reform commitments. The demandeur always pays in trade talks, even the US.

Identifying mutually beneficial bargains requires understanding what each party really wants. Here the US has sent mixed messages. Does the US want China to end unfair trading practices or to reduce its bilateral trade surplus? Or something else? Lack of clarity muddles calculations in Beijing and increases the chances that Chinese offers fall short of US expectations.

Process outcomes matter too. History suggests Chinese leaders place great store on their autonomy — not being pushed around by foreigners has great value to them. US president Donald Trump’s public campaign of criticism of Chinese policy makes it harder for his counterpart to make concessions. The omens, then, are not good. 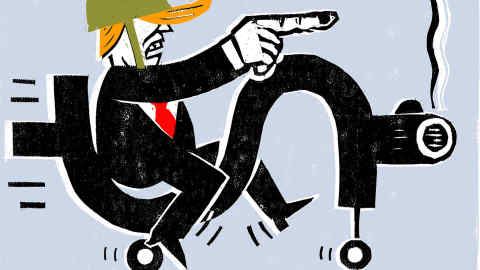 Still, trade talks often stall and later revive. What factors could trigger a deal? Clinching a deal has to be in the near-term interests of at least one party, otherwise serious bargaining won’t begin. But are there signs either party is anxious for a deal? China has figured out that by devaluing its currency it can offset, partially at least, the harm done by US tariffs. Beijing has also taken macroeconomic stimulus measures that have softened the blow. Chinese economic growth rates have slowed but not dramatically.

While the direct effect of tariff increases on buyers has yet to have a significant impact on the US economy, the indirect effects through postponed corporate investment spending and falling business confidence became more apparent from the second quarter of this year. Stock-market convulsions have certainly got Trump’s attention.

With an eye on his re-election prospects, Trump has been publicly leaning on the Federal Reserve Board to lower interest rates and is also mulling tax cuts. Paradoxically, every time the president criticises the Fed he signals to the Chinese his fears about both the US economy and his longevity in post. For sure, many factors determine the growth of the US economy and US presidential elections. Still, chances are higher that the first meaningful olive branch is offered by Washington.

The last question, which is a potential fly in the ointment, is whether a deal will stick. This turns on several factors. Ronald Reagan had a memorable phrase in nuclear talks with the Soviet Union: trust, but verify. Checking compliance is important and depends critically on what is agreed in the first place. Chinese pledges to cut subsidies may be easier to verify than commitments to deter Chinese companies from stealing foreign intellectual property. Easiest of all to monitor is the bilateral trade balance, which may make a managed trade deal attractive to some.

Assessments of whether a deal might stick are also shaped by each side’s behaviour during the negotiation. Here the G20 meetings between Trump and Chinese president Xi Jinping are relevant. The interim deals reached in Buenos Aires and Osaka were seen by the Chinese as truces while the negotiations progressed. Following these deals Trump raised tariffs further, calling into question whether the US would stick to any final deal. Combined with having to defend during a US presidential election any deal from inevitable attacks by Democrats, Chinese policymakers may have concluded the US would pull out of any accord concluded before November 2020. In which case, Beijing might surmise, why sign a deal in the first place?

There are few grounds for optimism. Brinkmanship will continue until something prompts a major rethink in Beijing or Washington. Plus, once an issue reaches the desks of presidents and prime ministers, other — even unrelated — considerations matter. For example, geopolitical rivalry, personal one-upmanship and disputes over Taiwan and over the South China Sea could inflame tensions. Trump reckons trade wars are easy to win. Gabriel García Márquez was closer to the mark: wars are easier to start than end.

The writer is professor of international trade and economic development, and academic director of the MBA at the University of St Gallen