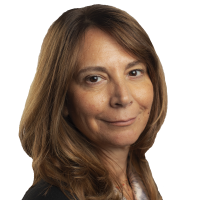 Roula Khalaf is Editor of the Financial Times. She was previously deputy editor from 2016 to 2020, overseeing a range of newsroom initiatives and award winning editorial projects and leading a global network of over 100 foreign correspondents.

Before taking up the deputy editor role, Khalaf was the FT's foreign editor and oversaw the FT's operations in Europe, Africa and the Middle East. Before that, as Middle East editor, she launched a Middle East edition and led coverage of the Arab Spring. Khalaf was named foreign commentator of the year at the Editorial Intelligence Comment Awards in 2016 and her series on Qatar won the Foreign Press Association’s Feature story of the year in 2013. She joined the FT in 1995 as North Africa correspondent and before that was a staff writer for Forbes magazine in New York.